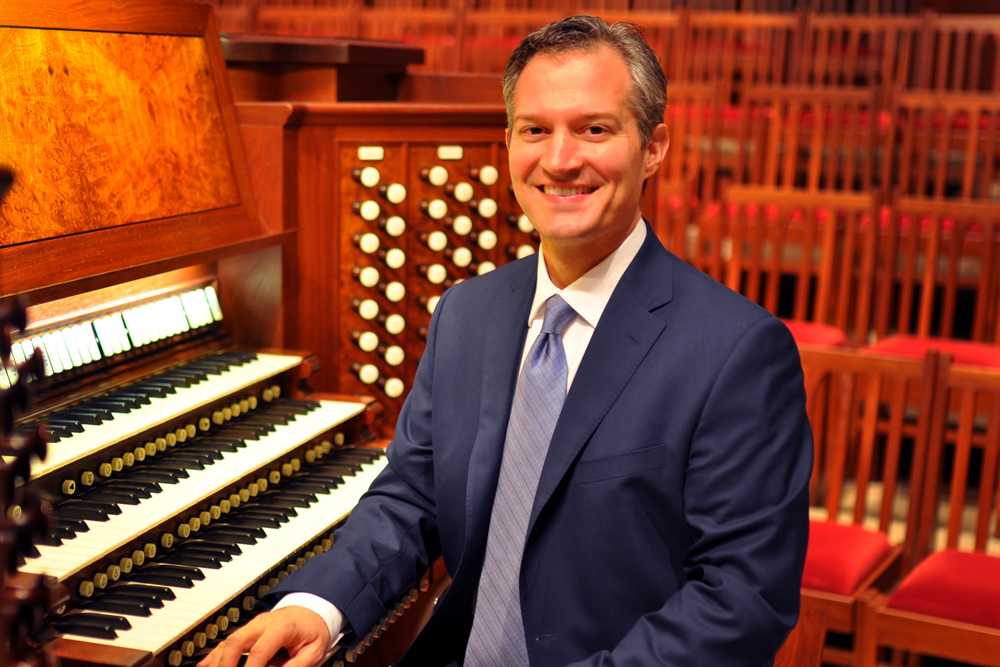 Bradley Welch, resident organist of the Dallas Symphony, plays excerpts from Widor’s Sixth Symphony and other music tonight at 7 at Christ Presbyterian Church in Canton, co-sponsored by the Canton Chapter of the American Guild of Organists.

And at 8 pm at Cleveland’s Hermit Club — nestled among the parking lots of Playhouse Square — Steve Eva leads the Chagrin Valley Studio Orchestra in a costumed and “lightly staged” performance of Rodgers & Hammerstein’s Carousel (limited seating, but more performances are to come). More details in our Concert Listings.

Musical America sits down with Michigan Opera Theater president and CEO Wayne S. Brown to talk about recent “Out and About” stagings since Yuval Sharon joined the company as artistic director, and its forthcoming, in-theater staging of La bohème, backwards. Click here to view.

The Sphinx Organization is now accepting submissions of solo cello and cello/piano scores for a recording project involving cellist Thomas Mesa and pianist Michelle Cann to be produced by PARMA Recordings’ Grammy-winning team for release on Navona Records. Click here for details.

Both Burning River Baroque and violinist Jinjoo Cho have CDs in production. BRB’s first album, Love Poems in the Time of Climate Change, featuring works by Dawn Sontag performed by soprano Malina Rauschenfels and harpsichordist Paula Maust, will be released on October 15. Cho’s is scheduled for world-wide release by Naïve Classique on October 29.

German composer Heinrich Schütz was born in Kostritz on this date in 1585. Renowned for his evocative settings of texts, Schütz’s vocal music comes in all shapes and sizes, from two-part motets that reflected the decimation of choirs during the Thirty Years War, to splendid polychoral works he wrote after study trips to Venice. It’s a pity that his only opera, Daphne, has been lost.

Listen here to Concerto Palatino perform his astonishingly expressive motet Anime mea liquefacta est from the Symphoniae Sacrae, and here to his funeral cantata, Ein Musikalische Exequien, a Protestant requiem commissioned long before it was needed by a patron who wanted to enjoy it while he was still alive. Lionel Bringuier leads the Belgian choir Vox Luminis, who sang most recently in Cleveland at St. John’s Cathedral in October, 2018.

French organist and composer Louis Vierne was born on this date in Poitiers. Legally blind, Vierne served as organist of the Cathedral of Notre-Dame in Paris from 1900-1937, ending his career dramatically by collapsing at the console during a recital.

There’s a celebrated recording of Vierne’s Mass for choir and two organs recorded in Notre-Dame and featuring the composer’s later successor Pierre Cochereau. Listen here. (NB: most of the accompanying photos are actually of Notre-Dame in Montréal!)

On this date in 1930, Japanese composer Toru Takemitsu was born in Tokyo. Two of his nature-inspired compositions are available in performances by the CIM New Music Ensemble, Keith Fitch, director. Click on the links to watch Water-ways (from a November, 2015 concert), and Rain Spell (from February, 2018).

Australian composer Carl Vine was born on October 8, 1954 in Perth. His Piano Sonata No. 1 was the required work that Cleveland International Piano Competition laureate Spencer Myer played in the 2005 contest. Watch his performances here and here.

And American jazz pianist and concert promoter Clarence Williams was born in Louisiana on this date in 1893 — or according to other sources, on October 6, 1898. In 1915, he launched what became in the 1920s the leading Black-owned music publishing firm in the U.S. Also during the ‘20s, Williams appeared as pianist on numerous blues records recorded in New York. His career ended strangely: in 1943, he sold his catalogue of tunes to Decca Records for $50,000 and retired from the music business to open the Harlem Thrift Shop.

The Cleveland Orchestra’s second performance of the new season on Sunday afternoon, October 17 at the newly renamed Mandel Hall at Severance Music Center was just such an occasion. If the ensemble’s return to public concerts under the baton of Franz Welser-Möst wasn’t enough reason to light a bonfire, the Cleveland debut of a new work written for one of the Orchestra’s most popular soloists, and the swan song of one of its longest-serving members added extra fuel to the celebration. END_OF_DOCUMENT_TOKEN_TO_BE_REPLACED

Cleverly, CityMusic’s latest concert led listeners through these changes one step at a time. “Musical Matrix” took transformation as its theme, and each piece on the October 2 program at the Maltz Performing Arts Center (the second of two performances) put its spin on the subject. END_OF_DOCUMENT_TOKEN_TO_BE_REPLACED