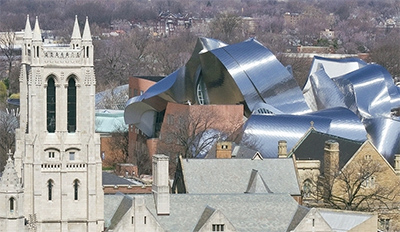 12:15 pm brings the “McGaffin Carillon Holiday Lunchtime Concert,” featuring guest carillonneur Patrick Macoska. The program at McGaffin Tower is still to be announced, and you can email info@ucbells.org to make requests. It’s free, and also available as a live stream.

Eric Charnofsky — host of the weekly radio show “Not Your Grandmother’s Classical Music,” which airs on Mondays from 2 to 4 — has shared a note about the show’s programming today and going forward:

“Due to the increase in COVID cases, WRUW is moving to remote broadcasting for the foreseeable future. That means that Not Your Grandmother’s Classical Music will be curated with music played by an automated server, but without your favorite radio announcer’s guidance. Nevertheless, you are invited to tune in and enjoy some festive and seasonal music.” Click here to listen to the internet feed.

And from 6 to 7:30, Cleveland Opera Theater presents “Good Tidings We Bring,” an evening of song in support of the arts and mental health awareness. Donations support COT’s own initiatives, and also help underwrite a spring performance to benefit LifeAct, an organization focused on suicide-prevention programming for middle-school and high-school students. Watch online here, or drive by 150 Quail Hollow Dr. in Moreland Hills.

Recent days have brought cancellations in the Northeast Ohio music scene due to COVID-19. On Friday, No Exit announced that its free concert on Saturday at Praxis Fiber Arts would no longer go on due to the escalating conditions of the pandemic. On Sunday afternoon, The Cleveland Orchestra cancelled the day’s 2:30 and 7:30 holiday concerts due to a COVID case within the ensemble. Likewise, Cleveland Play House announced on Saturday that the remaining live performances of “Light It Up” have been cancelled due to cases of COVID within the cast and crew.

(Cleveland Orchestra ticket holders should keep an eye on their email inboxes for a form to either request a refund or donate their tickets. Another possibility: exchanging tickets for a future concert, which can be done online or by calling 216-231-1111. Note that the phone lines are likely to be busy.)

In brighter news, last week Neighborhood Connections announced that the organization has approved $323,930 in grants to support 126 projects in Cleveland and East Cleveland. That includes 22 projects in arts and culture that will be co-funded by, well, Cuyahoga Arts & Culture. See a list of the grant recipients here.

If you missed Quire Cleveland’s “Carols for Quire XI” program, tune in to WCLV’s Cleveland Ovations on the radio or online on Wednesday, December 22 at 8:00 pm for a re-broadcast of the December 4 concert, plus a conversation between John Simna and Quire artistic director Jay White. 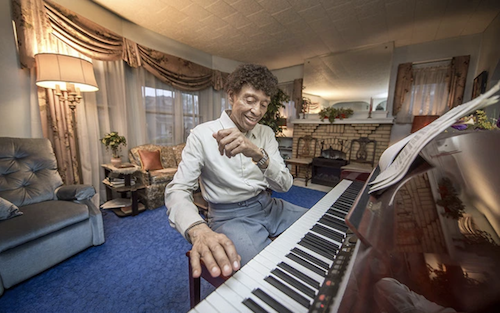 As he told Mike Telin in an interview for ClevelandClassical.com from June 2015 — just before receiving that special distinction from CAP — Adams felt pleased and honored, but also surprised.

“It sounds a little final,” he said, laughing. “Of course a composer never retires, so I look at it as a lifetime up until this point, and that’s OK with me.”

That interview provides a window into Adams’ upbringing, his path to composition, his extensive vocal training, and his position as music director of Grace Presbyterian Church in Lakewood. “I love it and it’s very healthy for me. It balances my creative work, which is very isolated, with engaging socially.”

One important moment in his composition career was leaving a position on the faculty of the University of Kansas in order to return to Cleveland and write his opera Blake. “It was a little scary, but I was determined to compose this opera,” he said. With a text by Daniel Mayers, it tells the story of a slave who, on the eve of the Civil War, resolves to lead his people out of bondage and to a life of dignity.

Click here to listen to four excerpts from Blake: an orchestral prelude, the arias “My New Found Friends” and “Miranda’s Lullaby,” and the duet “I Hear Your Voice So Clearly.”

Among the large-scale works on the instrumental side of Adams’ oeuvre is the Twenty-Six Etudes for Solo Piano. Click here for a YouTube playlist containing live recordings of each etude, as performed by Maria Thompson Corley and Thomas Otten in 2014, and read Daniel Hathaway’s review of that footage here.

We’ll close this article with a quote from Adams describing his past, present, and future: “I take pride and pleasure in what I have done, and I work hard at getting it just right. I am true to my core values, and that gives me a great deal of satisfaction, but I still have a lot of music to compose, and a lot of different life experiences to have.”

END_OF_DOCUMENT_TOKEN_TO_BE_REPLACED

Rodgers & Hammerstein’s Cinderella was originally produced for television in 1957 — seven years after the animated Disney film was released — and starred Julie Andrews. According to the Rodgers & Hammerstein website, it was viewed by over 100 million people. END_OF_DOCUMENT_TOKEN_TO_BE_REPLACED

The story line has its origin in an 1855 play and an 1842 farce that Thornton Wilder mined for his 1938 play The Merchant of Yonkers. When that turned out to be a flop, in 1954 Wilder made the crucial decision to re-center the show around the character of the legendary marriage broker Dolly Gallagher Levi and renamed it The Matchmaker. END_OF_DOCUMENT_TOKEN_TO_BE_REPLACED

The Dodero Center for the Performing Arts at the Gilmore Academy in Gates Mills is one feature of an impressive campus. The auditorium is shallow, the stage is deep, and the ensemble played without a shell. Throughout the program, the sound, especially in instruments’ lower registers, tended to disappear. END_OF_DOCUMENT_TOKEN_TO_BE_REPLACED