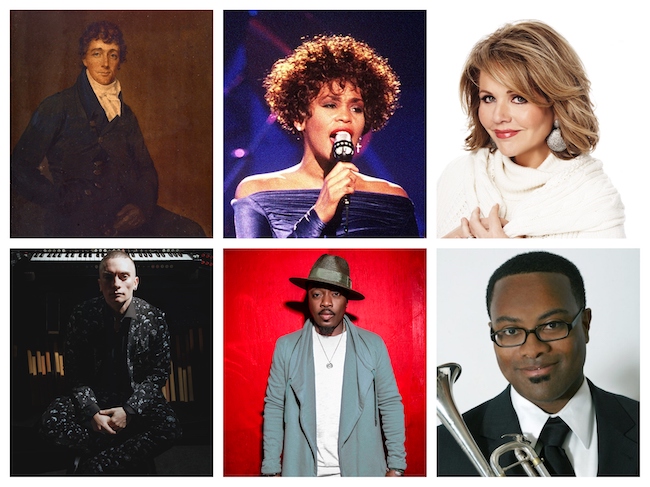 The 178th anniversary today of the death of Francis Scott Key got me reflecting on memorable performances of The Star-Spangled Banner. Here are five that came to mind.

Accompanied by Jahja Ling and The Florida Orchestra, pop icon Whitney Houston’s rendition at the 1991 Super Bowl is rightfully one of the most famous, often serving as a point of comparison to those that have come since. Its enduring appeal comes both from its context (in the midst of the Persian Gulf War) and of course from the performance itself, which is absolutely staggering — a snapshot of what it truly is for a voice to soar.

Here’s another important Super Bowl performance: in 2014, Renée Fleming became the first opera singer to perform the National Anthem at that event. It was a big moment in the mainstream spotlight for classical music, and her mixture of pop and operatic style largely received high marks. Critic Anne Midgette gave a deep analysis here for The Washington Post.

On the more experimental side, I was fortunate enough to be in person for organist Cameron Carpenter’s adventurous National Anthem before his appearance with the Hawaii Symphony in 2018. Sadly it’s nowhere to be found online — you’ll just have to imagine one surprising chord after another, and plenty of grinding dissonance. Here’s a fitting substitute, though: Carpenter’s wild Stars and Stripes Forever.

When vocalists tinker around with the National Anthem, usually what they’re doing is adding more and more dramatic ornamentation (or occasionally forgetting the lyrics). But at the 2019 NBA All-Star Game, singer-songwriter Anthony Hamilton bucked convention in a truly unique and refreshing way. He reimagines much of the melody in an understated way, while still holding onto the signature moments, and he delivers it all with plenty of smooth soulfulness — brilliant.

The circumstances of this last performance are completely different. No stage, no crowd, just one man in a room. As part of clarinetist Anthony McGill’s #TakeTwoKnees movement for racial justice in the spring of 2020, Metropolitan Opera principal trumpet Billy Hunter shared a powerful rendition of The Star-Spangled Banner that notably goes quiet at two key words at the end. Explaining it here doesn’t do it justice. Listen, and feel the emptiness of those silences.

ArtsNow has announced an Artist Relief Fund for artists who live and/or work in Summit County and who have been impacted by the pandemic. Grants of $500 or $1000 per person will be awarded from the $50,000 that has been provided by the GAR Foundation. Applications will be accepted through January 28 at midnight. Click here for more details and to apply.

Let’s check in with three past contributors to ClevelandClassical.com by reading some of their most recent stories.

In The Boston Globe, Zoë Madonna writes about the Boston Hope Music Teaching Project, which connected frontline health care workers with conservatory students for music lessons this past fall. “The goal wasn’t to teach them skill or technique, but to provide a refuge from day-to-day life on the COVID ward…”

In San Francisco Classical Voice, Jeremy Reynolds talks to members of Sō Percussion, Third Coast Percussion, and Yarn/Wire about the proliferation of percussion ensembles in the contemporary classical scene. “The new is being embraced in a more important way than it ever has been.”

And for WTTW in Chicago, Daniel Hautzinger writes about the death of democracy — but not in the United States. Instead, he covers the documentary A Thousand Cuts, about the Philippines under the regime of Rodrigo Duterte. “You really have to be vigilant, because you can take your eyes off the ball, and then so quickly democratic institutions crumble.”

Northeast Ohio’s Les Délices has long been that rarest of beasts: a world-class organization so proud of its region (ours) and repertoire (distinct niches in pre-1800 music) that it never tries to be everything to everyone, paradoxically making a strong case for a broad, curious international following. In the December episode of its SalonEra series, the ensemble embraces its strengths and community to marvelous effect. END_OF_DOCUMENT_TOKEN_TO_BE_REPLACED

END_OF_DOCUMENT_TOKEN_TO_BE_REPLACED

Another I remember fondly is Gian Carlo Menotti’s Amahl and the Night Visitors.  Commissioned by NBC, the one act, made-for-television opera, premiered on December 24, 1951, at the network’s studios in New York’s Rockefeller Center. And now, through the wonders of technology, Cleveland Opera Theater has created a magical new production of the work which is available on demand through January 6, 2021 (Three Kings Day). END_OF_DOCUMENT_TOKEN_TO_BE_REPLACED

Jessen has now followed up with her second solo CD, Winter Chapel. Recorded on January 17, 2020 in Oberlin College’s Fairchild Chapel and available on Carrier Records, the album is a continuum in Jessen’s journey to push the musical boundaries of her instrument and herself as an improviser. END_OF_DOCUMENT_TOKEN_TO_BE_REPLACED