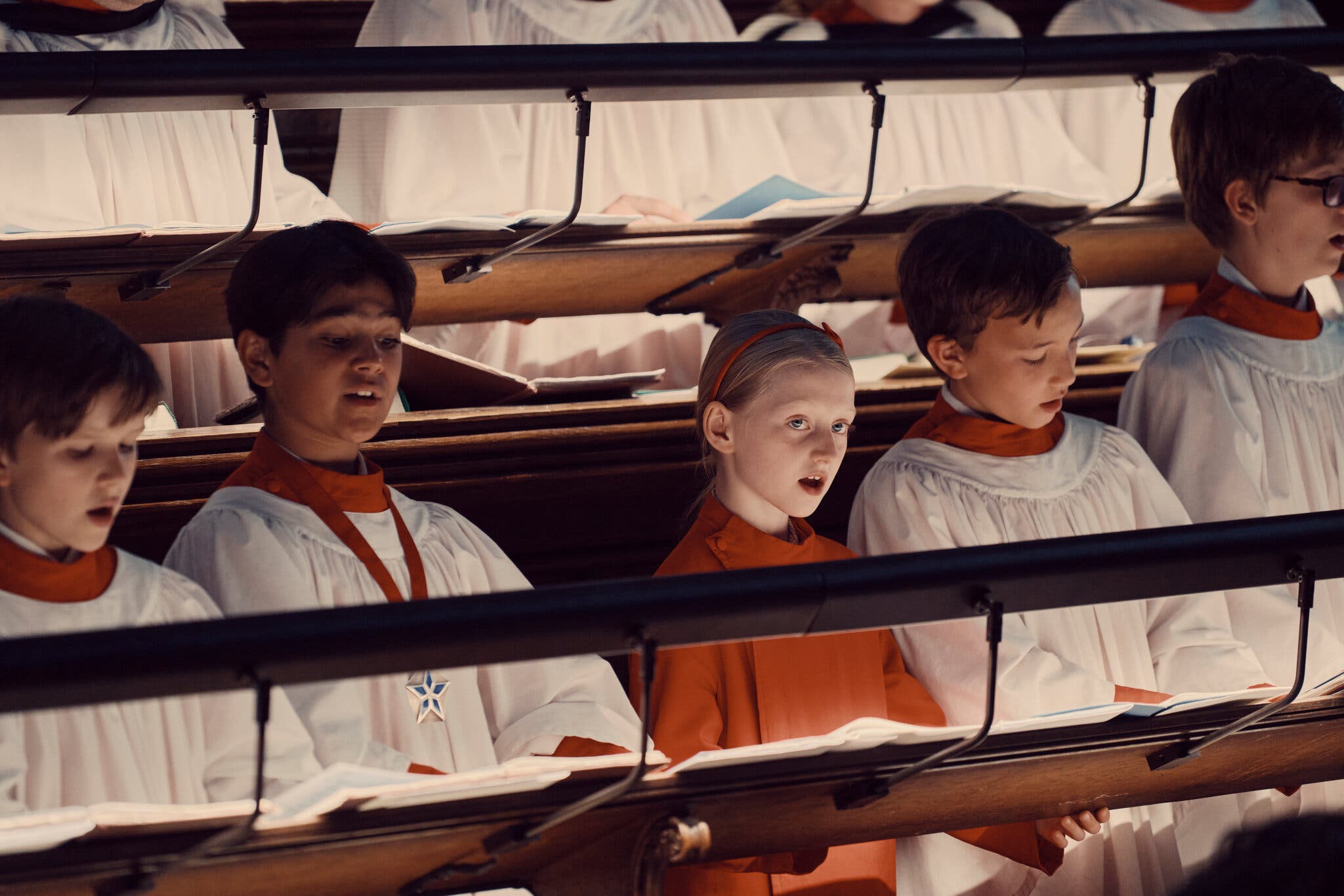 Nethsingha, who will take up a new job at Westminster Abbey in the new year, talked to The New York Times about responses he’s received about the change. “At least one part of the choral world isn’t deliberating the implications of mixing: the children doing the singing. Last year, when Nethsingha told his boys that girls would be joining them, he said he braced himself for a ‘barrage of complaints.’ Instead, the boys asked just four practical questions — including one about whether they had sufficient toilets for new joiners — then ‘went bouncing off to their lessons,’ Nethsingha said. ‘They didn’t have any of the baggage that adults have,” he added. Read the story here. (Photo note: New choristers receive their white surplices after passing their probationary period.)

Glimmerglass Opera has addressed the dearth of comic opera titles in the repertoire by launching its own “jukebox” opera, repurposing music by Rossini for Tenor Overboard. In a New York Times article, music director Joseph Colaneri said that “Fans should be reassured that they will laugh with Rossini, not at him. ‘We are seeking to perform these pieces with all the musical integrity necessary to make them come off. We’re taking it all musically very seriously, and putting a spin on it.”  Read the article here.

Oberlin graduate  Rhiannon Giddens, who took over direction of the Silk Road Ensemble from its founder, Yo Yo Ma, is reweaving the group for its second iteration. Ma told Washington Post critic Michael Andor Broudeur that ‘She’s an original thinker, and she’s also a fantastic communicator with oodles of talent. I’m now a listener, an appreciator. I want to see what new people she brings on, I want to see how organizationally it will change. I’m really curious! I’m a fan.’ Read the article here.

“The students of the Afghanistan National Institute of Music fled after the Taliban seized power. Now they are trying to remake their school, and their dreams, in Portugal.” Read the New York Times article here.

Administered by the World Listening Project, the goal is to educate and raise awareness of our sonic environment both as a source of information and aesthetic enjoyment. In addition to his World Soundscape Project, Schafer also coined the term schizophonia which he used to describe the splitting of an original sound and its electroacoustic reproduction.

In 1987 he was the recipient of the first Glenn Gould Prize. His honors list includes two JUNO Awards, the Walter Carsen Prize,  and the Governor General’s Performing Arts Award for Lifetime Artistic Achievement, Canada’s highest honor in the performing arts. In 2013, he was made a Companion of the Order of Canada “for his contributions as an internationally renowned composer of contemporary music, and for his groundbreaking work in acoustic ecology.

In 2003 Schafer served as artistic director of Coimbra Vibra! In Coimbra, Portugal, which celebrated music and the acoustic environment and attracted 1200 musicians and over 10000 spectators. Schafer was also a champion of graphic notation. He died of complications of Alzheimer’s on August 14, 2021.

Franz Schmidt’s Symphony No. 4 showcased the ensemble, under guest conductor Jonathan Berman, in the standard conventions of a not-so-standard piece. But at the start of the program, the musicians were equal partners to pianist Cédric Tiberghien, whose playing could be as bold as the full orchestra or as intimate as any instrumental solo. END_OF_DOCUMENT_TOKEN_TO_BE_REPLACED

END_OF_DOCUMENT_TOKEN_TO_BE_REPLACED

Jackson began the program with a recitation of Langston Hughes’ poem “Helen Keller” — the first of five poems by Hughes that served as interludes between each piece on the first half. END_OF_DOCUMENT_TOKEN_TO_BE_REPLACED

Pianos with pins and tape on strings, a bass drum and tam tam, crotales, Almglocken, and vibes. Microphones were hooked up all around the instruments. The feed was sent to speakers around the room. Lighting designer Nicholas Houfek hung incandescent globes over the arrangement of instruments from thin black wires stretching across the beams. END_OF_DOCUMENT_TOKEN_TO_BE_REPLACED

From the podium, Elim Chan set an ambitious tone for the evening. The rising star conductor, here in her Cleveland Orchestra debut, has a commanding style, and every twist and turn in Saturday’s performance tracked closely with her baton. END_OF_DOCUMENT_TOKEN_TO_BE_REPLACED