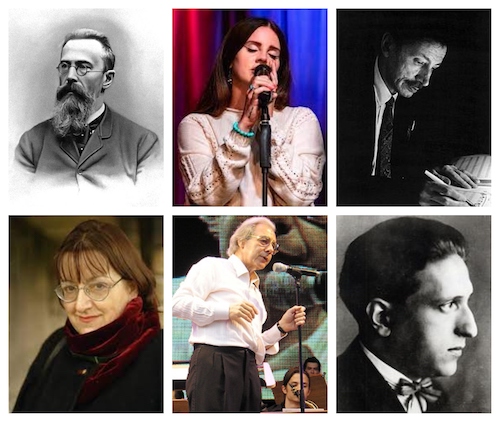 No timed events today, but a reminder that the Re:Sound New Music Festival runs all month, with several videos available to peruse at your leisure. If you prefer a more guided approach, check out the Festival’s third weekly playlist, “Transitions & Transformations,” but you’ll need to register first if you haven’t already.

In case you missed our weekend update, Friday evening brought the results of the Stroud Classical Guitar Competition. First place went to Jack Davisson of Palo Alto, followed by two other Californians and one Floridian: Eric Wang of San Jose, Ethan Boyers of Santa Rosa, and Patricia Hernandez of Miami. Watch the final-round video and announcement here.

The Cleveland Classical Guitar Society’s Creative Fusion Series continues with Thomas Flippin’s A Dark Winter in a Lost Year. That piece, written in response to the pandemic, the disruption of education, and the murder of George Floyd, weaves together sampled recordings of speech with music. It’s performed by Duo Noire — the guitar duo of Flippin himself and Christopher Mallett — who are joined by violinist Kathleen Collins and cellist Tanya Ell Woolfrey. Watch the video here.

From Rimsky-Korsakov to Lana Del Rey, and Pavel Haas to Lalo Schifrin, let’s use moods and keys to tie together a diverse playlist based on the musical anniversaries of June 21st.

Capriccio Espagnol by Russian composer Nikolai Rimsky-Korsakov (who died on this date in 1908) begins with ultimate razzle-dazzle. Its opening movement in A Major is full of flair, with clarinet trills, tambourine rolls, and lots of fortissimo, but it ends in a gentler place: a string pizzicato on A over the carpet of a timpani roll (stop at 1:26).

We pick up on an A from the electric guitar in Shades of Cool by American singer-songwriter Lana Del Rey, who turns 36 today. But here we’re in d minor, setting up Del Rey’s melancholy opening verse, fully of the smoky tone that is one of her calling cards. The chorus takes us higher up into her range, and into an F Major that feels like a mirage.

Pausing at 1:57, we move from the end of that chorus into something else quite dreamy: the opening of the first movement of the wonderful Symphony No. 2, “Mysterious Mountain” by Armenian-American composer Alan Hovhaness, who died on this date in 2000.

After a couple minutes of enjoying the gentle and meditative qualities of that work, perhaps stopping after the celestial celesta solo at 2:18, float even higher up into an ethereal realm with the combination of organ and choir in The Darkness is No Darkness by lesser-known English composer Judith Bingham, who turns 69 today, and who was appointed Officer of the Order of the British Empire in 2020.

Next, how about a shock to the system? Lalo Schifrin’s “Theme from Mission: Impossible” ought to do the trick. You likely know the classic opening material, but stick around at least until 1:19 to hear the excellent keyboard solo.

We’ll conclude with something that retains the energetic quality of that tune but that also transports us into more solemn air: the rhythmically driving opening to the Study for String Orchestra by Moravian-Jewish composer Pavel Haas (born on this date in 1899), who wrote the piece while imprisoned at the Theresienstadt concentration camp in the early 1940s. It was premiered there under the baton of Czech conductor Karel Ančerl, and was reconstructed after Ančerl found the parts after the liberation of the camp. (Both musicians were among 18,000 prisoners transferred to Auschwitz in 1944; Ančerl survived, but Haas did not.)

Nothing can capture the horror of that event, but for something at least musically appropriate, listen to the most deeply reflective section of this piece, the slow section beginning at 4:02.

END_OF_DOCUMENT_TOKEN_TO_BE_REPLACED

What was that strange din coming over the live feed from Ludwig Recital Hall on Friday evening, July 23, as the Miami String Quartet filed onstage to play the third faculty recital of the Kent Blossom Music Festival? Accustomed as we were during the pandemic ban on live audiences to hearing the sound of no hands clapping, it was both startling and thrilling to witness a large crowd putting their hands together to welcome one of the Festival’s perennial favorites back for an in-person performance. END_OF_DOCUMENT_TOKEN_TO_BE_REPLACED

Practical reasons aside, there aren’t many ensembles who can put together an all-Mozart evening as elegantly as The Cleveland Orchestra. END_OF_DOCUMENT_TOKEN_TO_BE_REPLACED