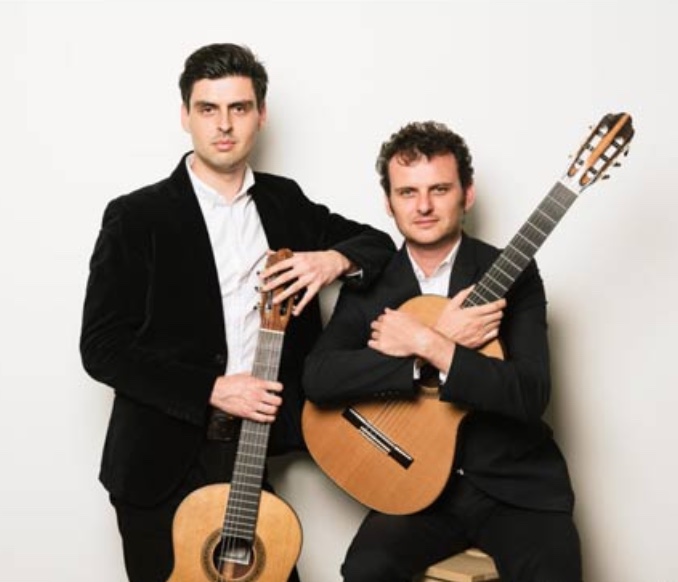 At 2:00 pm Eric Charnofsky brings you the latest edition of his Radio Broadcast: Not Your Grandmother’s Classical Music on Program on WRUW FM 91.1. The program includes the Piano Sonata by Paul Dukas, Anton Webern’s Five Movements for String Quartet, the Sonata for solo violin by Béla Bartók transcribed for viola, and a sonata for flute and basso continuo by Jakob Friedrich Kleinknecht. Click here to listen to the internet feed.

Their program will include J.S. Bach’s Arioso BWV 156, Handel’s Keyboard Suite HWV 452, Granados’ Valses Poéticos, Gnattali’s Suite Retratos,  Brouwer’s Blue Mountains, and the Grigoryan Brothers’ Six Original Pieces (“This is Us Project”) and Sailboat Suite. The concert is free and will be livestreamed on the RRCMS’ YouTube channel.

Today we commemorate the death of North German organist and composer Dietrich Buxtehude in 1707.

Buxtehude, who invented the Advent Abendmusik concerts and served as Werckmeister as well as organist of St. Mary’s Church in Lübeck (imagine him placing candle orders and keeping an eye on custodians while composing those stylus fantasticus organ preludes), inspired J.S. Bach to take an unauthorized leave to study with him.

For a taste of his compositions, listen to his seven-verse cantata Membra Jesu Nostri (1680, performed here by the Schola Cantorum Basiliensis under René Jacobs), his Praeludium in C, BuxWV 136 (performed in 2008 by Kirk M. Rich on the Flentrop organ in Oberlin’s Warner Concert Hall), and his Praeludium in d, BuxWV 140, played here on the Arp Schnitger organ in Norden by Thiemo Janssen).

And for something completely different, on May 9, 1965, pianist Vladimir Horowitz returned to the concert stage in New York’s Carnegie Hall after a twelve-year hiatus, his recital — at 3:30 pm on a Sunday, of course — marked by a 30-minute standing ovation. The event became legendary, but for an unvarnished account, read Charles Michener’s behind-the-scenes look, “The Singular Horowitz Remembered, Warts and All” in The Observer.

END_OF_DOCUMENT_TOKEN_TO_BE_REPLACED

Franz Welser-Möst led the final bows on Saturday night at Severance, like the star of any show should. The Cleveland Orchestra’s music director is in his element presiding over the ensemble’s annual opera production, which this season packs the drama. Verdi’s Otello — in a concert staging that opened May 21 and runs for two more performances (May 26 and 29) — demands big voices, instrumental forces to match, and a conductor who can give it all shape and direction. END_OF_DOCUMENT_TOKEN_TO_BE_REPLACED

The cimbalom was the feature of the show, an instrument capable of taking on many personas. Its performer, Chester Englander, has shaped his career around the instrument, and has inspired composers to write more repertoire for it, some of which was presented on the program. END_OF_DOCUMENT_TOKEN_TO_BE_REPLACED