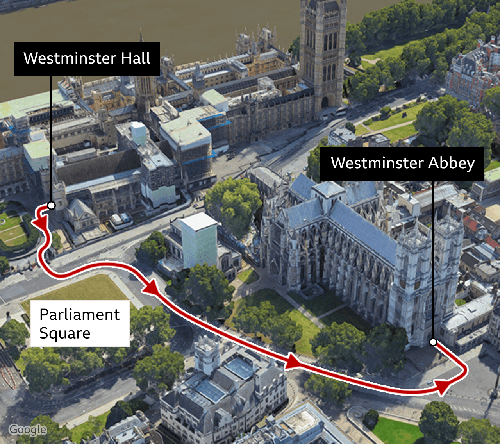 Coverage of the State Funeral for Elizabeth II will occupy the broadcast media all day today. The most extensive coverage will surely come from the BBC. A download of the official program is a must for following the ceremony itself.

A bit of background on the venue for the funeral rites: Westminster Abbey (full name: the Collegiate Church of St. Peter, Westminster) is a “royal peculiar,” an entity entirely under the authority of the Crown rather than a cathedral of the Church of England under the jurisdiction of the bishop of a diocese.

The Guardian has published a Q&A article by British author Ian McKewan detailing his frustration in trying to create the perfect novella.

What drives you to write now and, what still fascinates you about the process?

I’ve been immersed in writing fiction for 52 years. What still lures me is the sense, probably an illusion, that just ahead of me, always just out of my reach and completely without definition, is the perfect and beautiful thing, probably a novella, that unwraps everything around it, the ultimate human story that illuminates our brilliance and stupidity. Could be the siren that drives me on to the rocks.

On September 19, 1972, French pianist Robert Casadesus died in Paris. Known especially for his interpretations of Mozart’s concertos, he recorded a number of them with George Szell and The Cleveland Orchestra (sometimes credited as “The Columbia Symphony” for contractual reasons). Listen here to nos. 21 and 24 in recordings remastered in 2018. Beginning in 1975 and for its first ten seasons, the Cleveland International Piano Competition was known as the Casadesus Competition.

And September 19 brings what would have been the 91st birthday of pianist and composer Muhal Richard Abrams, who was born in Chicago in  1930, and died in 2017.

A Jazz Master as named by the National Endowment for the Arts in 2010, his compositions and improvisations are often classified as, well, unclassifiable. At the keyboard he was known to suddenly reference historical jazz styles, woven into his own brand of modernism. And as a composer, his ouevre reveals both his background in the blues and his interest in chamber music and orchestra. He’s also famous for helping to found the Association for the Advancement of Creative Musicians (A.A.C.M.), and was its first president.

His discography is vast — he released an album nearly every year between 1977 and 1997. Here’s one suggestion: his final album, Made in Chicago, which you can hear on Spotify. Abrams is joined by drummer Jack DeJohnette, saxophonists Roscoe Mitchell and Henry Threadgill, and bassist Larry Gray. It was recorded live at the Chicago Jazz Festival in 2013, and marked a reunion for several A.A.C.M. colleagues.

Writing for PostGenre, critic Rob Shepherd named Made in Chicago among his ten favorite albums from the 2010s, and said that it “is already a lasting tribute to not just the AACM and its enduring legacy but the city of Chicago itself which has fostered such music.”