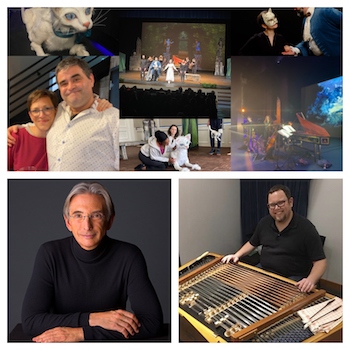 •Les Délices’ The White Cat on digital, Cleveland Orchestra with MTT and cellist Gautier Capuçon, and No Exit with cimbalom player Chester Englander

Les Délices’ The White Cat heads to Marquee TV today, meaning you can finally catch, or rewatch, the ensemble’s Baroque opera pastiche based on Catherine D’Aulnoy’s 17th-century retelling of Puss in Boots. The production — which includes puppets, projections, a libretto by Larry Rosenwald, and music by Lully, Couperin, and Marais — debuted early this month at Akron Public Library and the Breen Center in Ohio City. Read Mike Telin’s preview and Daniel Hathaway’s review, and get tickets here.

The Cleveland Orchestra welcomes a pair of special guests — conductor Michael Tilson Thomas and cellist Gautier Capuçon — in this week’s program, beginning tonight at 7:30 at Severance. The playlist includes Fauré’s Elegy, Britten’s Suite from The Prince of the Pagodas, and two works by Tchaikovsky: the Polonaise from Eugene Onegin, and the Rococo Variations, where Capuçon will leave his mark on the evening. Read Mike Telin’s conversation with that cellist and humanitarian, and get tickets here.

Another guest artist being welcomed tonight is cimbalom player Chester Englander. He’ll be featured at CSU’s Drinko Hall in a free program from No Exit titled “The Big Cimbalom Thing,” which includes music by Per Nørgård and world premieres by Douglas Knehans, Hong-Da Chin, and Edward Smaldone. Read Mike Telin’s interview with Englander here to get a peek at what’s in store.

We recently wrote about the Nu Deco Ensemble’s appearance on the Tuesday Musical series next Wednesday, May 4 at 7:30 pm. Now TMA has announced some bonuses for any young professionals out there: a promo code (YPNIGHT) for discounted tickets, available through the first of the month, as well as a pre-concert reception for those so-called YP’s from 6 to 7:15 pm in E.J. Thomas Hall’s Flying Balcony Club, with a cash bar and free appetizers as a draw. After the concert, all are welcome to party with the musicians in the lobby and preview TMA’s next season.

The Cleveland Orchestra has announced a couple of updates to its staff — one promotion from within, and one outside hire. 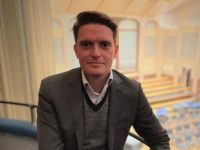 Previously the Director of Artistic Planning, Ilya Gidalevich will now take the mantle of Vice President of that department, a role that includes managing and overseeing just about anything when it comes to artistic planning and concert programming — whether at Severance or Blossom, or for any tours and residences in which the Orchestra partakes. 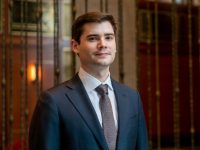 Meanwhile, Michael Gandlmayr — who most recently served as Artistic Administrator for the Seattle Symphony — has been welcomed into the fold in Cleveland in that same position. And he’ll be working with Gidalevich (who in fact joined the Orchestra in that same role in 2016). Gandlmayr will cover the artistic planning and execution of concerts as well as educational and community engagement events, plus day-to-day tasks around the Artistic Department such as managing guest-artist logistics — something that doesn’t sound stressful in the slightest during the time of COVID. 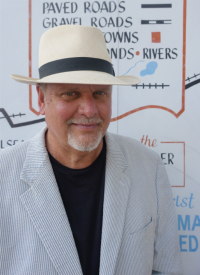 Iowa-born, Grammy-winning University of Michigan faculty composer Michael Daugherty turns 68 today. One thing that’s interesting to note before listening to his work is that all the way back to his childhood in Cedar Rapids, his life has been abundant with musical variety and pop-culture influence. His dad was a jazz and country-music drummer, his mom was an amateur singer, and his grandma played piano for silent films.

Responsible for a few of his Grammys through a recording by the Nashville Symphony, Daugherty’s five-movement, forty-minute, Superman-inspired Metropolis Symphony makes all those genre influences evident with a mix of jazz, rock, funk, avant-garde, and symphonic music. Listen to the Nashville recording here — and take a moment to enjoy the album’s cover art.

Another piece not to be missed is Daugherty’s Dead Elvis for bassoon and ensemble. The theater of it is just as important as the music, so when you click here to watch the first movement in a performance by TK DeWitt (at the time a student at Rice, now a member of the Kansas City Symphony), make sure not to skip over all the shenanigans that take place before a single note has been played. 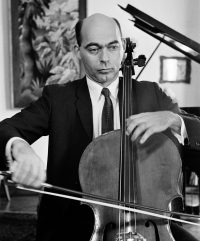 Another musical luminary to celebrate today is Hungarian-American cellist János Starker, who died on this date in 2013. For 57 of his 88 years on earth, he taught at Indiana University, which brings up one Ohio connection: it’s there that he mentored now-Cleveland Orchestra principal cello Mark Kosower.

Enjoy Starker’s playing in a 1988 performance of two unaccompanied cello suites — one by Bach, one by Gaspar Cassadó — plus Kodály’s solo sonata. Then listen to his 1980 appearance at Blossom Music Festival, where he joined Eduardo Mata and The Cleveland Orchestra in Bloch’s Schelomo: Rhapsodie Hébraïque.

END_OF_DOCUMENT_TOKEN_TO_BE_REPLACED

Rodgers & Hammerstein’s Cinderella was originally produced for television in 1957 — seven years after the animated Disney film was released — and starred Julie Andrews. According to the Rodgers & Hammerstein website, it was viewed by over 100 million people. END_OF_DOCUMENT_TOKEN_TO_BE_REPLACED

The story line has its origin in an 1855 play and an 1842 farce that Thornton Wilder mined for his 1938 play The Merchant of Yonkers. When that turned out to be a flop, in 1954 Wilder made the crucial decision to re-center the show around the character of the legendary marriage broker Dolly Gallagher Levi and renamed it The Matchmaker. END_OF_DOCUMENT_TOKEN_TO_BE_REPLACED

The Dodero Center for the Performing Arts at the Gilmore Academy in Gates Mills is one feature of an impressive campus. The auditorium is shallow, the stage is deep, and the ensemble played without a shell. Throughout the program, the sound, especially in instruments’ lower registers, tended to disappear. END_OF_DOCUMENT_TOKEN_TO_BE_REPLACED