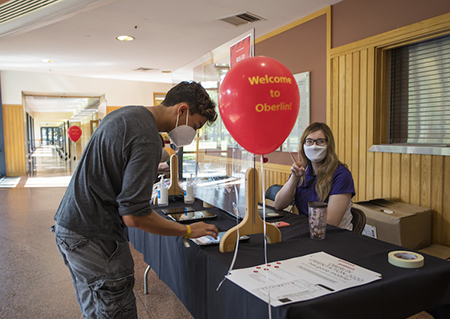 The campuses of Northeast Ohio Universities and Conservatories are coming to life this week as students — masked and observing safety protocols — return for various configurations of a new academic year. The normally busy concert schedules we usually begin publishing are subject to improvisation as larger ensembles begin rehearsing outdoors and nearly all performances will be streamed on the Internet. We’ll follow this developing story as plans unfold. (Oberlin check-in photo by Yvonne Gay).

Meanwhile, Baldwin Wallace Conservatory will launch its new year with a faculty convocation recital to be streamed today at 3:00 pm. Point your browser here at start time to watch.

And in planning for the future, Oberlin Conservatory would like to hear which of its summer “Oberlin Stage Left” programs resonated with viewers. Go here to vote and make suggestions for future online programs.

LIVE TODAY — IN A PARKING LOT:

Renaissance composer Josquin des Prez (most often simply known as Josquin) died on this date in 1521 at the age of 81 in Valenciennes. There’s a curious lack of biographical information for one of the most celebrated musical figures of his era, and scholars have been busy in recent years determining exactly which of many attributed pieces — both sacred and secular — he actually wrote while in the service of dukes, noble families, and popes.

Here are three authentic Josquin works: his Ave Maria as sung by Quire Cleveland under Ross W. Duffin (listen for the exquisite canon in the middle section), his Gaude Virgo performed by Mignarda at Cleveland’s Immaculate Conception Church, and Nymphes des Bois, (La Déploration des Johannes Ockeghem), his memorial lament on the death of his teacher, whose style he imitates in the piece, sung by the Hilliard Ensemble (you can follow along with the score.)

And on this date in 1886, British-American composer and violist Rebecca Clarke was born in Harrow. Clarke came to prominence with what she called “my one little whiff of success” in 1919 when her Viola Sonata tied for first place in a competition sponsored by Elizabeth Sprague Coolidge with a piece by Ernst Bloch. Her reputation has enjoyed more “whiffs of success” since her death in New York in 1979, as evidenced by the establishment of the Rebecca Clarke Society.

Here are two performances of that sonata for Clarke’s own chosen instrument: one from a concert by Richard O’Neill with pianist Jeremy Denk, and a second from a recital at the Cleveland Institute of Music by Nathan Steinberg with pianist Luwen Chen.

It might seem that there’s not a lot left to discover after three decades of experience with the Red Priest’s charming and evocative score, but this performance boasted a secret weapon: the young Spanish violinist Francisco Fullana, now the Orchestra’s artist-in-residence, whose affecting personality and easy virtuosity raised the solo part a quantum leap above the merely extraordinary. END_OF_DOCUMENT_TOKEN_TO_BE_REPLACED

END_OF_DOCUMENT_TOKEN_TO_BE_REPLACED

The Cleveland Orchestra’s second performance of the new season on Sunday afternoon, October 17 at the newly renamed Mandel Hall at Severance Music Center was just such an occasion. If the ensemble’s return to public concerts under the baton of Franz Welser-Möst wasn’t enough reason to light a bonfire, the Cleveland debut of a new work written for one of the Orchestra’s most popular soloists, and the swan song of one of its longest-serving members added extra fuel to the celebration. END_OF_DOCUMENT_TOKEN_TO_BE_REPLACED