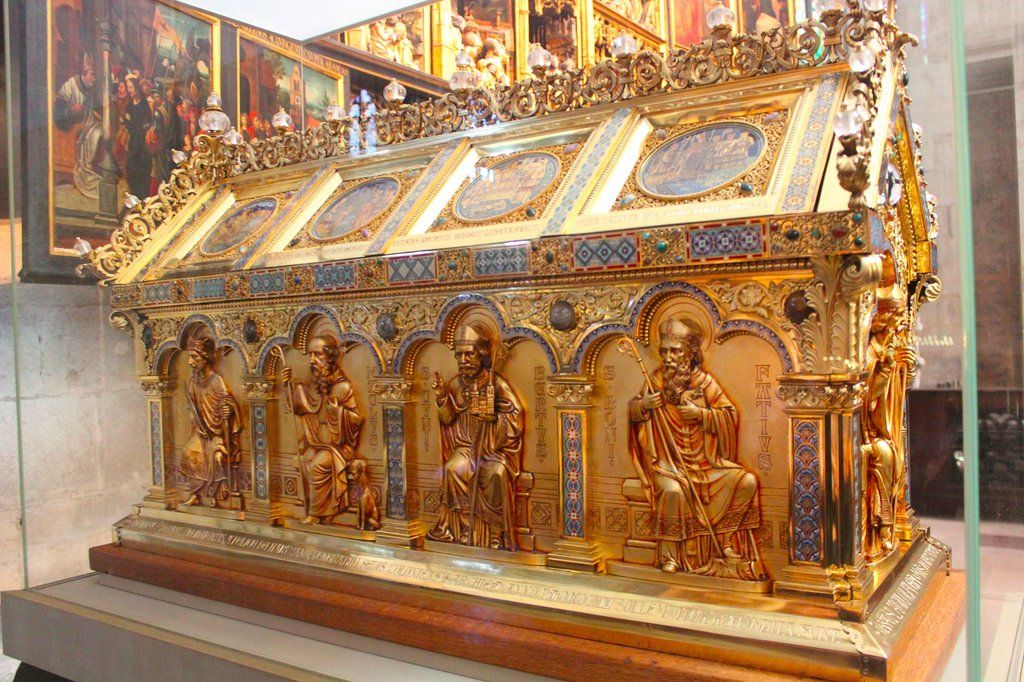 Because events yesterday in the state of Georgia and the nation’s capital were more than a little distracting, consider giving yesterday’s Diary a closer look and adding a celebration we didn’t get around to mentioning on January 6.

That would be Three Kings’ Day, or to call that Christian feast day by its Greek name, the Epiphany, marking the visit of the Magi to the newborn Jesus in Bethlehem, as well as the end of the traditional Twelve Days of Christmas. Although mentioned only in the Gospel of Matthew, the Astrologers or Wise Men “from the East” eventually became a trio, acquired names, and were upgraded to kings, most likely because of the nature of the gifts they brought along. They avoided the wrath of King Herod by returning to their country “by another way,” which may account for how they ended up in Germany, where legend has it that they were martyred and their bones preserved in a shrine (above) in Cologne (Köln) Cathedral.

Dial back a day and mark the occasion with some music that the legend of those three kings have inspired. There’s an ancient Provençal carol, The March of the Kings, that Georges Bizet cleverly combined with a farandole in his Arlesiénne Suite No. 2. Here’s an orchestral version played by the Bavarian Radio Symphony under Mariss Jansons, as well as an elaborate staging of a Mack Wilberg arrangement performed by the Mormon Tabernacle Choir and Orchestra.

Speaking of cleverly combining tunes, German composer Peter Cornelius also did that in his Die Drei Königen, where a male soloist narrates the story against the chorale Wie schön leuchtet der Morgenstern. Here’s a German text version sung by Choir Filipovic, and an English version from King’s College, Cambridge.

The Kings play a central role in Gian Carlo Menotti’s Amahl and the Night Visitors, written for television in 1951 and recently streamed by Cleveland Opera Theater.

And Duke Ellington’s last work, Three Black Kings, completed by his son Mercer and performed at his memorial concert in 1976, was choreographed by Alvin Ailey and performed by his troupe throughout the 1976-1977 season. The suite, whose three movements honor Balthazar, King Solomon, and Martin Luther King, Jr., received a symphonic arrangement from the pen of conductor Maurice Peress. Listen to the third movement as performed here by the Dayton Philharmonic Youth Orchestra.

French composer Francis Poulenc was born on this date in 1899, making January 6 a good occasion to revisit his Flute Sonata. Demarre McGill plays it here with pianist Michael McHale, but you can simultaneously raise a glass to a second musician, Jean-Pierre Rampal, born on this date in 1922, with a performance of the work he recorded with pianist Robert Veyron-Lacroix.

To end with a bit of sheer silliness, Rampal good-naturedly appears here in a duet with Miss Piggy.

Northeast Ohio’s Les Délices has long been that rarest of beasts: a world-class organization so proud of its region (ours) and repertoire (distinct niches in pre-1800 music) that it never tries to be everything to everyone, paradoxically making a strong case for a broad, curious international following. In the December episode of its SalonEra series, the ensemble embraces its strengths and community to marvelous effect. END_OF_DOCUMENT_TOKEN_TO_BE_REPLACED

END_OF_DOCUMENT_TOKEN_TO_BE_REPLACED

Another I remember fondly is Gian Carlo Menotti’s Amahl and the Night Visitors.  Commissioned by NBC, the one act, made-for-television opera, premiered on December 24, 1951, at the network’s studios in New York’s Rockefeller Center. And now, through the wonders of technology, Cleveland Opera Theater has created a magical new production of the work which is available on demand through January 6, 2021 (Three Kings Day). END_OF_DOCUMENT_TOKEN_TO_BE_REPLACED

Jessen has now followed up with her second solo CD, Winter Chapel. Recorded on January 17, 2020 in Oberlin College’s Fairchild Chapel and available on Carrier Records, the album is a continuum in Jessen’s journey to push the musical boundaries of her instrument and herself as an improviser. END_OF_DOCUMENT_TOKEN_TO_BE_REPLACED