At ​​7:30 pm it’s the Vanessa Rubin Quintet. Presented in partnership with Tri-C JazzFest Cleveland, Rubin will sing classics, ballads and blues on the Maiden Lane Stage, 51 E. Market St. in downtown Akron. In case of rain, the concert moves next door into the Musica Club. The event is free.

Cuyahoga Arts and Culture reports that while the wider economy is reopening, the ongoing COVID-19 pandemic continues to be devastating for local nonprofit arts organizations and creative workers.

According to a survey of 65 of General Operating Support grant recipients, steady job loss and revenue loss has continued in 2021. The organizations reported 1,636 total people laid off, furloughed or with reduced hours between January and June 2021.

And that after more than 15 months, 65 Cuyahoga County-based arts and culture nonprofits funded by Cuyahoga Arts & Culture continue to report layoffs as organizations operate with less capacity.

The survey finds that Federal funding is helping to make up some lost revenues and helping groups to adapt programming and connect with residents. But overall, the pandemic continues to negatively impact the creative economy and community quality of life.

“The hard truth is that the creative economy will be one of the last to recover from the pandemic,” executive director of CAC, Jill M. Paulsen said. “Ohio’s creative industry continues to suffer from the highest unemployment rate among all sectors. CAC has accelerated payment of our grants and worked with Cuyahoga County to secure CARES Act funding, but it may not be enough for some organizations.”

With cryptocurrencies once again in the headlines, the recent Time Magazine article Teen Artists Are Making Millions on NFT’s. How Are They Doing It? makes for an interesting read. If you’re unfamiliar with NFT’s or non-fungible tokens and how they work, click here to read an article in Kiplinger.

The latest issue of Pure Jazz Magazine is now available online and features a conversation with Tri-C JazzFest favorite Regina Carter as well as a look into the career of clarinetist Ms. Doreen Kitchen.

Since my colleague Jarrett Hoffman did such a great job with last year’s Almanac, I think it’s worth having another look. 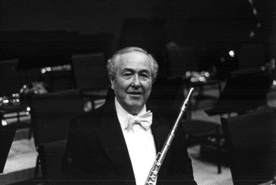 Several big names share anniversaries on September 23. Those who died on this date include Italian composer Vincenzo Bellini (1801-35) and English composer Malcolm Arnold (1921-2006). On the less grim end of the spectrum, pioneering jazz saxophonist John Coltrane (1926-67) shares a birthday with a giant of the flute, Julius Baker (1915-2003), who was born in Cleveland (pictured).

Soon after completing his studies at Eastman and then at Curtis, Baker took up a post as second flute in The Cleveland Orchestra from 1937-41. Short stints as principal flute with the Pittsburgh and Chicago Symphonies followed before he found a home for eighteen years in that position with the New York Philharmonic.

His powerful legacy extends from the orchestral side of the field to chamber music — he was a founding member of the Bach Aria Group — and pedagogy. He taught at Curtis, Juilliard, and Carnegie Mellon, and his many famous students include The Cleveland Orchestra’s own Joshua Smith and Mary Kay Fink. Baker’s dedication to teaching continued until the week he died at age 87 in 2003.

Among his many recordings, here’s a video of Baker playing the first movement of Bach’s Fifth Brandenburg Concerto with David Nadien on violin, Leonard Bernstein on piano, and the New York Philharmonic. 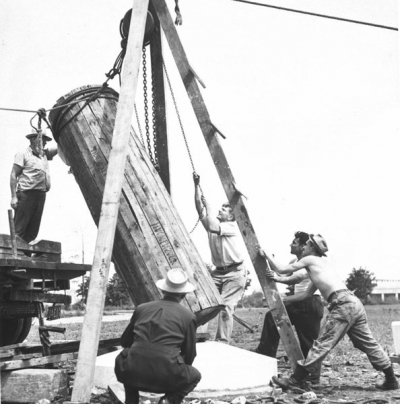 On a different note, on September 23, 1938, a time capsule was buried in Queens, New York City. The 7.5-foot-long, bullet-shaped container made of copper alloy is not to be opened until 6939, or five thousand years after the 1939 World’s Fair.

Sealed inside are over 100 objects that, it was decided, captured the spirit of the time — “including a pack of cigarettes, a 35mm camera, a safety razor, children’s toys, money, millions of pages of text on a microfilm, seed samples from common crops such as wheat, corn and cotton, and even handwritten messages from figures such as Albert Einstein and Thomas Mann,” according to the Bureau International des Expositions.

END_OF_DOCUMENT_TOKEN_TO_BE_REPLACED

The Orpheus myth inspired French Baroque composers Jean-Philippe Rameau and Philippe Courbois to write expressive solo cantatas about the famous Greek musician-poet and his futile attempts — because of his own impatience — to rescue his beloved Eurydice from the grasp of Pluto in the Underworld. These are beautifully performed by the clear-voiced soprano Hannah De Priest and the velvet-throated baritone Jonathan Woody (who makes a walk-on appearance in the Rameau). END_OF_DOCUMENT_TOKEN_TO_BE_REPLACED

Now that live concerts are beginning to proliferate, it was delightful to hear Oberlin cello professor Darrett Adkins ring a change on the solo suite format with his Hypersuite No. 3 on September 28 in the Cirigliano Studio Theatre at Lorain County Community College. His program opened the new season of Signature Series performances in Elyria, and was dedicated to the memory of Eva Hornyak. END_OF_DOCUMENT_TOKEN_TO_BE_REPLACED