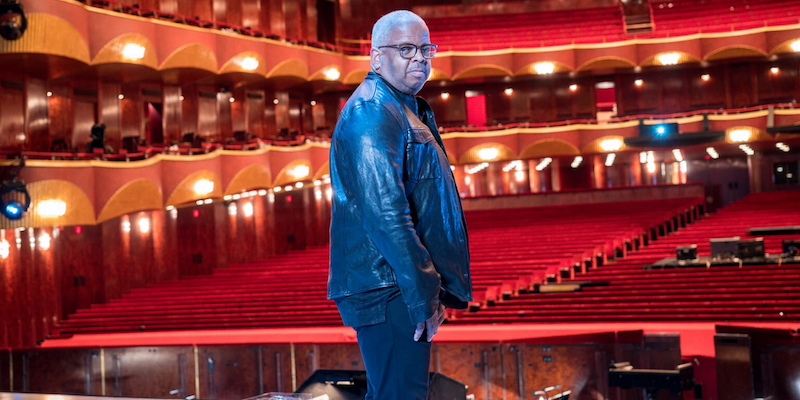 The biggest news in American music occurred this past Monday with the Metropolitan Opera’s production of Terrance Blanchard’s Fire Shot Up in My Bones (above, New York Times photo of Blanchard on the Met stage by Wayne Lawrence as published on The Hub (League of American Orchestras).

Yes it was the first performance on the Met stage in 18-months, but more importantly it was the first time the company has staged an opera by a Black composer (Blanchard), a Black librettist (Kasi Lemmons), a Black co-director for a main-stage production (Camille A. Brown), as well as an almost entirely Black cast, chorus and dance troupe. The Opera is based on a 2014 memoir by New York Times columnist Charles M. Blow, recounting his turbulent upbringing in rural Louisiana.

Writing for NPR, Nate Chinen says that “Blanchard’s music for Fire is glowingly consonant but full of subtle harmonic and timbral surprises (along with strategic flickers of dissonance). He goes on to say: “Strikingly, given Blanchard’s profile as a jazz artist, Fire eludes description as a ‘jazz opera.’ Its language is avowedly classical, with elements drawn from the canonical composers, like Puccini, that defined Blanchard’s early exposure to the art form.”

Commenting on the opera itself, Heidi Waleson of the Wall Street Journal wrote: “The story has a happy ending—its protagonist, after all, is now a well-known journalist, who took a curtain call with the cast and production team. Even more critically, the Met has finally welcomed Black creators telling a complex, contemporary story of a Black man. May that openness be just the beginning.”

And Washington Post critic Michael Andor Brodeur describes Fire Shot Up in My Bones as “…a defiant, tender and vital work of art, and a watershed moment for American opera…And yet, for all of its beauty, force and grandeur, the real promise of Fire is profoundly simple — it feels like a starting point for something new, a refresh of where opera can take us.”

Here’s are links to reviews:

Today marks the anniversaries of the birth of Irish composer and organist Charles Villiers Stanford (1852) and Russian violinist David Oistrakh (1908), and the death of American composer and music critic Virgil Thomson (1989).

Here are a couple of local performances to celebrate those musicians. Here, Quire Cleveland sings Stanford’s motet Beati quorum via under guest conductor Tim Brown at Trinity Cathedral in 2011. And here, Oistrakh joins George Szell and The Cleveland Orchestra in a 1969 recording of Brahms’ Violin Concerto.

The Cleveland Orchestra’s second performance of the new season on Sunday afternoon, October 17 at the newly renamed Mandel Hall at Severance Music Center was just such an occasion. If the ensemble’s return to public concerts under the baton of Franz Welser-Möst wasn’t enough reason to light a bonfire, the Cleveland debut of a new work written for one of the Orchestra’s most popular soloists, and the swan song of one of its longest-serving members added extra fuel to the celebration. END_OF_DOCUMENT_TOKEN_TO_BE_REPLACED

Cleverly, CityMusic’s latest concert led listeners through these changes one step at a time. “Musical Matrix” took transformation as its theme, and each piece on the October 2 program at the Maltz Performing Arts Center (the second of two performances) put its spin on the subject. END_OF_DOCUMENT_TOKEN_TO_BE_REPLACED