•Cancellations in Boston and Vienna due to COVID and Russia

•Almanac: comedian David Letterman, the different iterations of his band, and a handful of his classical-musician guests

Tonight at 7:30, the University of Akron presents a guest recital by Invoke, a string quartet that describes itself as “bowed and fretted,” since their instrumentation can include violin, viola, cello, banjo, and mandolin, as well as vocals. That’s part of their philosophy of blending different musical styles — classical, bluegrass, jazz, minimalism — into a singular sound that defies classification. The concert takes place at Guzzetta Recital Hall, and tickets will be available at the door.

The Boston Symphony has canceled its European tour because of concerns around COVID-19. “The orchestra has recently reported a surge in cases among players and members of the Tanglewood Festival Chorus,” Javier C. Hernández writes in The New York Times.

And Vienna’s Konzerthaus has canceled a benefit concert for Ukraine that was to have featured MusicAeterna, a Russian-based ensemble that is supported by the state-owned VTB Bank. Read the story in the Times, again from Mr. Hernández. 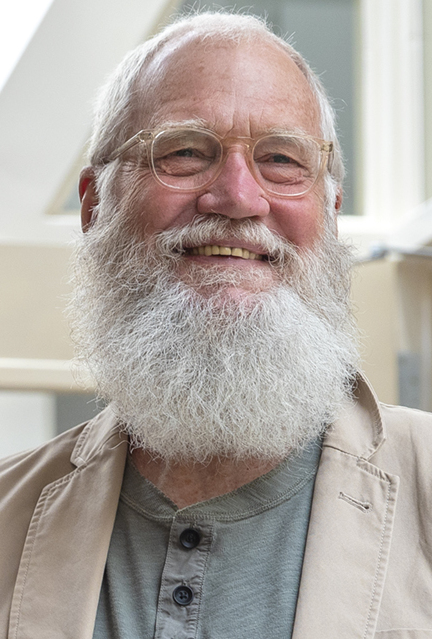 Our next guest is a comedian, writer, and producer with a career spanning over over five decades in television, dating back to his time as a weatherman right out of college, when he once described hailstones “the size of canned hams.” Please welcome Indianapolis-born David Letterman, who turns 75 today — as evidenced by this photo.

In addition to the topical monologues, comedic bits, and celebrity interviews, some of the most traditional parts of a late-night talk show include the in-house band and the frequent musical guests.

When he first took his seat behind the desk to kick off NBC’s Late Night franchise, Letterman’s musical choices were limited by the presence of his idol and NBC colleague Johnny Carson. As the powerful host of Late Night’s big-brother franchise, The Tonight Show, Carson wanted the new show to be quite distinct from his, and that included the type of in-house band that could be hired: there could not be a wind section.

Letterman hired keyboardist Paul Shaffer, a member of the house band for Saturday Night Live, to put something together. And Shaffer looked to the jazz/rock fusion group The 24th Street Band, pulling its bassist, its guitarist, and its drummer to join him in the first iteration of what would become known as the World’s Most Dangerous Band. Watch a 1983 performance by the group (Paul Shaffer, keyboards, Hiram Bullock, guitar, Will Lee, bass, and Steve Jordan, drums) on Late Night with David Letterman here.

After Carson retired from The Tonight Show and Letterman was passed over for that seat in favor of Jay Leno, Dave moved to CBS to start up Late Show. There, the band had to ditch the “World’s Most Dangerous Band” moniker — NBC owned the rights to it — but the newly named CBS Orchestra (not to be confused with the CBS Symphony Orchestra) now had the opportunity to add winds. Listen to the new group’s cover of Tower of Power’s Only So Much Oil in the Ground here, featuring not just saxophones and trumpet, but also vocalist Felicia Collins.

As for musical guests, some of the artists most closely associated with Letterman are James Brown, R.E.M., Cher, and his favorite band of all time, Foo Fighters — watch their performance of Everlong on Letterman’s final show here. He was also known for bringing on fresh faces, such as Future Islands in their memorable network television debut.

Classical music has also had its share of notable moments on Letterman. Here’s a handful of them:

One non-musical highlight in those clips: Letterman has some fun with Mutter’s new 40-disc box — “the ideal hamster habitat.”

END_OF_DOCUMENT_TOKEN_TO_BE_REPLACED

Rodgers & Hammerstein’s Cinderella was originally produced for television in 1957 — seven years after the animated Disney film was released — and starred Julie Andrews. According to the Rodgers & Hammerstein website, it was viewed by over 100 million people. END_OF_DOCUMENT_TOKEN_TO_BE_REPLACED

The story line has its origin in an 1855 play and an 1842 farce that Thornton Wilder mined for his 1938 play The Merchant of Yonkers. When that turned out to be a flop, in 1954 Wilder made the crucial decision to re-center the show around the character of the legendary marriage broker Dolly Gallagher Levi and renamed it The Matchmaker. END_OF_DOCUMENT_TOKEN_TO_BE_REPLACED

The Dodero Center for the Performing Arts at the Gilmore Academy in Gates Mills is one feature of an impressive campus. The auditorium is shallow, the stage is deep, and the ensemble played without a shell. Throughout the program, the sound, especially in instruments’ lower registers, tended to disappear. END_OF_DOCUMENT_TOKEN_TO_BE_REPLACED