•The new director of bands at Kent State, and auditions for the Cleveland Orchestra Children’s Chorus and Youth Chorus

•Our almanac featuring Kay Swift, who became the first woman to score a complete Broadway musical with the hit 1930 comedy Fine and Dandy

At 12, the Tuesday Noon series at Church of the Covenant presents harpist Juan Riveros in works by André-François Marescotti, Arturo Márquez, Alberto Ginastera, and Lucas Ruiz de Ribayaz, as well as a piece of his own. It’s free both in person and online.

Kent State’s Glauser School of Music has announced the hiring of Benjamin Lorenzo as director of bands beginning this fall. Lorenzo is currently associate director of bands and director of athletic bands at the University of Arkansas, where he also teaches conducting and music education. His work in conducting and adjudicating has taken him from Latin America to Southeast Asia, and he is also a published arranger, orchestrator, and scholar. Read more about him in a press release.

Both the Cleveland Orchestra Children’s Chorus and Youth Chorus are holding auditions beginning next month. Notable performances this coming season include a trio of film concerts from the Lord of the Rings, Harry Potter, and Home Alone series. Click the links above for more information.

Byeol Kim, Third Prize Medalist at last year’s Cleveland International Piano Competition, will solo in Tchaikovsky’s Piano Concerto No. 1 with the Firelands Symphony this Sunday, April 24 at 4:00 pm at Sandusky High School Auditorium. Kim replaces Martín García García, who has withdrawn due to injury, the orchestra announced. The program, titled “Venture Into Nature,” also includes works by Copland and Dvořák inspired by the great outdoors.

And at 5:30 pm on Sunday, the Sacred Heart Concert Series in Oberlin will bring together eighteen performers for a program titled “Celebrating Voices of Our Time.” It includes the premieres of works by Oberlin Conservatory student composers Owen Collier and Michelle Li, as well as music by Takashi Yoshimatsu, Pauline Oliveros, and John Adams. More info on the series’ Facebook page. 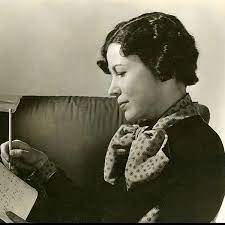 Last year we trained our focus on French composer Germaine Tailleferre, the only female member of the post-World War I group of composers known as Les Six.

This time around, we turn to New York City-born composer Katherine “Kay” Swift (1897-1993), who became the first woman to score a complete Broadway musical with the hit 1930 comedy Fine and Dandy, which ran for 255 performances. (Earlier women composers such as Clare Krummer and Nora Bayes wrote songs that were featured in several shows, or wrote entire one-acts.)

Having studied piano and composition at what is now the Juilliard School, Swift was also attracted to popular music, an interest that was encouraged by George Gershwin when they met in 1925. That began an important professional and personal relationship: Swift became a frequent source of musical advice, and they embarked on an affair that lasted until Gershwin’s death in 1937.

After that, she worked with Ira Gershwin to tie up loose ends, arranging and completing some of his brother’s unpublished works, and remaining devoted to projects around his music into her 90’s. Those posthumous George Gershwin works included Dawn of a New Day, the theme song for the 1939 World’s Fair, for which Swift served as Director of Light Music.

Jumping back a few years, Kay wrote the music for George Balanchine’s 1934 ballet Alma Mater, then was hired as staff composer at Radio City Music Hall, where she composed music for the Rockettes.

She was also a published author. Who Could Ask For Anything More? describes her experience living on an Oregon ranch with her cowboy husband, and served as the basis for the 1950 movie Never a Dull Moment, which also included songs by Swift.

The 1975 LP The Music of Kay Swift contains a treasure trove of the composer’s work in both the popular and classical realms, and in a unique area between those genres. Click these links to listen to her famous songs Fine and Dandy and Can’t We Be Friends? with Swift herself at the piano, her suite for orchestra Century 21, and her Waltz for Balanchine’s Alma Mater.

END_OF_DOCUMENT_TOKEN_TO_BE_REPLACED

Rodgers & Hammerstein’s Cinderella was originally produced for television in 1957 — seven years after the animated Disney film was released — and starred Julie Andrews. According to the Rodgers & Hammerstein website, it was viewed by over 100 million people. END_OF_DOCUMENT_TOKEN_TO_BE_REPLACED

The story line has its origin in an 1855 play and an 1842 farce that Thornton Wilder mined for his 1938 play The Merchant of Yonkers. When that turned out to be a flop, in 1954 Wilder made the crucial decision to re-center the show around the character of the legendary marriage broker Dolly Gallagher Levi and renamed it The Matchmaker. END_OF_DOCUMENT_TOKEN_TO_BE_REPLACED

The Dodero Center for the Performing Arts at the Gilmore Academy in Gates Mills is one feature of an impressive campus. The auditorium is shallow, the stage is deep, and the ensemble played without a shell. Throughout the program, the sound, especially in instruments’ lower registers, tended to disappear. END_OF_DOCUMENT_TOKEN_TO_BE_REPLACED