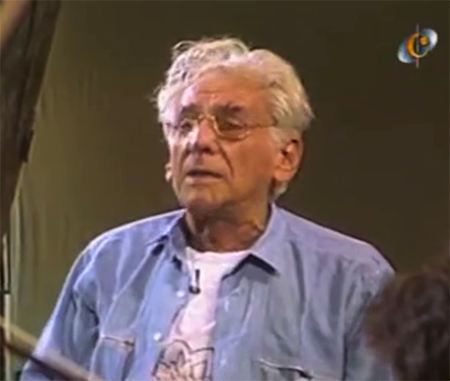 American conductor and composer Leonard Bernstein was born in Lawrence, Massachusetts on this date in 1918. We’ve previously mentioned his sole appearance with The Cleveland Orchestra in a 1970 performance of Mahler’s Second Symphony at Blossom, but today it might be fun to go behind the scenes and watch “Lenny” in rehearsal — a process even more revealing than a resulting performance.

I had the honor of studying with Bernstein in the conducting class at Tanglewood in the early ‘70s, and of singing in Mahler 2 with the Harvard-Radcliffe Choruses and the Boston Symphony on a radiant summer afternoon during that time. Click here to watch Bernstein rehearse Stravinsky’s The Rite of Spring during the 1987 International Conductor’s Competition and Master Course at the Schleswig-Holstein Festival in Germany. And in a separate clip, he takes the triangle players in Berlioz’ Roméo et Juliette aside for a brief tutorial.

And on August 25, 2002, American bass-baritone William Warfield died in Chicago at the age of 82 (read an obituary here). He launched his career with a debut recital at New York’s Town Hall in 1950, and two years later — in an age when cultural diplomacy was still important — he performed in Gershwin’s Porgy and Bess in the first of six tours he made for the U.S. State Department.

A graduate of the Eastman School of Music, Warfield went on to teach at the University of Illinois Urbana-Champaign and later at Northwestern University.

In his first television appearance in 1951, he was featured in “It ain’t necessarily so from Porgy (listen here), and toward the end of his career in 2000, he sang one of his signature pieces, Schubert’s Erlkönig in California. To appreciate another aspect of his artistic talents, you can hear his recitations of Paul Lauence Dunbar’s “Deacon Jones’ Grievance,” “Prometheus,” and “When Malindy Sings” here.

In addition to Bernstein, Haydn, and Mozart on WCLV’s Lunchtime with The Cleveland Orchestra and the MET Opera’s Il Trovatore during Verdi Week, tune in to the 92nd St. Y’s archive performance by the Danish String Quartet. Details here.

For musicians (and listeners) who are interested in diversifying their repertoire, the Oberlin Conservatory Library has curated a list of digital resources available via the Library’s website.

And Gustavo Dudamel and the Los Angeles Philharmonic have been busy filming concerts in the empty Hollywood Bowl, which boasts a stage capacious enough to accommodate a full, socially-distanced orchestra. The performances will be streamed free of charge. Details here.

END_OF_DOCUMENT_TOKEN_TO_BE_REPLACED

Although it wasn’t the original plan to go online last weekend for the final round of the James Stroud Classical Guitar Competition, moving to a digital format suited the event well. Young performers Aytahn Benavi, Patricia Hernandez, Ian Tubbs, and Eric Wang played in the intimate setting of their own homes, giving everyone who tuned in a front row seat. END_OF_DOCUMENT_TOKEN_TO_BE_REPLACED

END_OF_DOCUMENT_TOKEN_TO_BE_REPLACED

Joining a long list of arrangers, Parker Ramsay has now transcribed the Variations for the modern pedal harp, an instrument for which he holds a master’s degree from Juilliard, in addition to a degree in history from Cambridge University, plus a master’s in historical performance (organ and harpsichord) and an artist diploma (organ) from Oberlin. END_OF_DOCUMENT_TOKEN_TO_BE_REPLACED