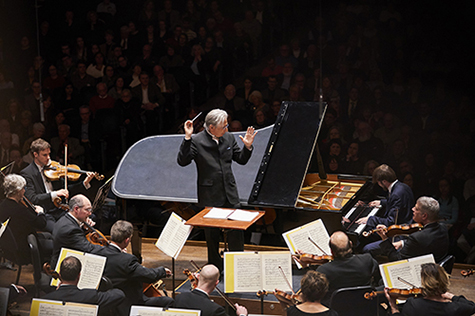 On  Wednesday, July 1 at 10:00 am, PianoCleveland will announce the names of 30 pianists who will compete in its Virtu(al)oso competition from July 30 to August 9. Watch the live announcement here.

Apollo’s Fire has released Episode 14 in its Music For the Soul Series. “Love and Jazz from 1603 (and thereabouts)” features performances from “L’Amore,” its Valentine’s Day program from last February, with love songs by Monteverdi and Barbara Strozzi, “as well as pairs of violinists in flirtatious instrumental duets by Vivaldi and Porpora.” Watch here.

Lunchtime with The Cleveland Orchestra on WCLV 104.9 Ideastream includes a Johann Strauss Jr. polka, Brahms’ Symphony No. 2, and one of Wagner’s Wesendonck songs with soprano Measha Brueggergosman. Wagner continues this evening with a 1989 Die Walküre from the MET Opera archives with a star-studded  cast: Hildegard Behrens, Jessye Norman, Christa Ludwig, Gary Lakes, James Morris, and Kurt Moll. See our Concert Listings for details.

On June 30, 1958, Finnish conductor Esa-Pekka Salonen was born in Helsinki. Music Director Designate of the San Francisco Symphony, and Music Director Emeritus of the Los Angeles Philharmonic, Salonen considered himself primarily as a composer (he took up conducting, he said, to guarantee that his works would be performed), but his fate was sealed when he stepped in at the last minute for Michael Tilson Thomas for Mahler’s Third Symphony in London.

Click here to watch a later performance of Mahler 3 with the Philharmonia Orchestra at the Royal Festival Hall in London, when Salonen returned in October 2017 to the scene of his earlier triumph.

And on this date in 1987, Catalan composer Federico Mompou died in Barcelona. A miniaturist trained in Paris, his piano works and songs are characterized by simplicity and elegance. British pianist Benjamin Grosvenor plays Mompou’s Paisajes in this video recorded at the studios of WGBH in Boston, and Mompou’s Musica Callada (“Silent Music”) inspired a music video.

The pianist, Jenny Lin, who has also recorded a CD with all 28 of the short pieces in Mompu’s collection, and included two of them on her NPR Tiny Desk Concert, has performed in Cleveland on the Signature Series at Lorain County Community College, on the Cleveland Contemporary Players Artist in Residency Series at Cleveland State University, on the Kent Keyboard Series, and at the Baldwin Wallace Bach Festival, but hasn’t been heard in Northeast Ohio since 2012. Someone should invite her back when live concerts resume.

We begin with the world premiere recording of Okeanos, Bernd Richard Deutsch’s concerto for organ and orchestra, featuring Paul Jacobs as soloist. The title refers not only to the Titan of Greek mythology, but also “to an idea of immense (and sometimes unfathomable) greatness and breadth, which conjures up in my mind the thought of the organ,” as Deutsch writes in his notes. END_OF_DOCUMENT_TOKEN_TO_BE_REPLACED

If you haven’t already warmed up to French Baroque clavecin music, Chicago-based keyboardist Jory Vinikour’s L’Unique: Harpsichord Music of François Couperin should make a strong impression on your musical tastes. The most prominent member of a musical dynasty second only to the German Bachs, François Couperin left a large treasure trove of keyboard works, 234 in all, arranged in 24 suites or Ordres.  END_OF_DOCUMENT_TOKEN_TO_BE_REPLACED

After weeks of watching online streams of archived concerts and ad hoc performances from quarantined musicians’ living rooms and bedrooms, it was thrilling to be able to advertise, preview, and report on two real-time webcasts last Friday and Saturday that embraced high production values and addressed the persistent issue of how to compensate musicians for online services. Saturday afternoon’s joint recital by Colin Davin and Jason Vieaux was sponsored by the Cleveland International Classical Guitar Festival, whose 2020 iteration, scheduled for that weekend at the Cleveland Institute of Music, vanished in the wake of the pandemic. END_OF_DOCUMENT_TOKEN_TO_BE_REPLACED