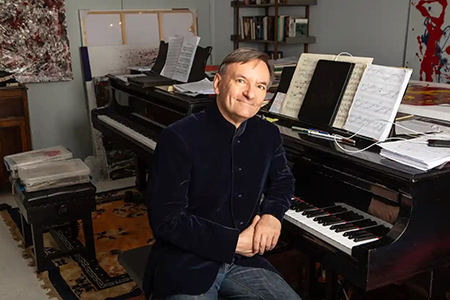 Organist Michael Peters will give a free noontime concert today on the Tuesday series at the Church of the Covenant in University Circle. Peters will play J.S. Bach’s Toccata, Adagio, and Fugue on the gallery organ, then moves to the chancel organ for two popular warhorses: Léon Boëllmann’s Suite Gothique, Op. 25, and Sigfrid Karg-Elert’s Nun danket alle Gott.

British pianist and polymath Stephen Hough (photo: Antonio Olmos) covers a number of topics in an interview with Fiona Maddox of The Guardian: the primacy of music in life, his first live concert since the lockdown when he played to an empty Wigmore Hall, his novel The Final Retreat, his solitary childhood, the effects of Brexit on touring artists, his love of puddings, and how it feels to turn 60.

Oregon Artswatch profiles Pat Zagelow on her 30 eventful years as executive director of Portland’s Friends of Chamber Music (she’s also a pianist);. The organization recently gave her a surprise party attended by more than a hundred guests who managed to keep the event a closely-guarded secret. Read the article here.

On this date in 1585, English composer Thomas Tallis died in Greenwich, having successfully weathered the back-and-forth religious machinations of monarchs and the stylistic changes that shifts between Catholic loyalists and Protestant reformers brought to the music of the Church of England. As his epitaph notes,

Tallis’ colleague William Byrd marked his passing in the elegy, Ye Sacred Muses, sung here by countertenor Daniel Elgersma to the accompaniment of a Viola Organistica, one of several such instruments invented by Leonardo da Vinci.

The extremes of musical style during Tallis’ career are captured in the recording Thomas Tallis: Lamentations, Motets, music for strings, performed on period instruments by Theatre of Voices (directed by Paul Hillier) and The King’s Noyse (directed by Daviv Douglass).

But today’s widest audience probably knows Tallis’ name from the simple psalm tune on which Ralph Vaughan Williams based his Fantasia on a theme of Thomas Tallis for double string orchestra and string quartet. The BBC Symphony Orchestra plays it here in an atmospheric performance under Andrew Davis at Gloucester Cathedral, where the work premiered at the Three Choirs Festival in 1910.

On November 23, 1878, French composer André Caplet was born on a boat off the coast of Le Havre, eventually perishing in 1925 from the effects of poison gas in World War I. A friend of Debussy, he’s mostly remembered for his orchestrations of that composer’s piano works.

That Caplet also spoke with his own voice is evident in such works as his Légende (suite symphonique pour harpe chromatique, saxophone et instruments à cordes), performed here at the University of Cincinnati College-Conservatory of Music in 2017, featuring saxophonist Om Srivastava, and in his Messe à trois voix, from which a female chorus at the Utrecht Conservatory sings the “O salutaris hostia” movement.

Finally, composer Krzysztof Penderecki first saw the light of day on this date in 1933 in Debica, Poland. Among his best-known works are the Threnody to the Victims of Hiroshima, and the Passion According to St. Luke. He died on March 29, 2020, and in his honor, Cleveland Orchestra first associate concertmaster Peter Otto recorded Penderecki’s La Follia in a June, 2020 living room concert.

Music director and conductor Daniel Meyer built his playlist around Cleveland themes and scenes. “Exploration CLE” made use of engaging selections from the classical canon and beyond that celebrated “what makes Cleveland so special.” Happily, he and his musicians avoided constructing a visual slide show, choosing to let the music speak for itself. END_OF_DOCUMENT_TOKEN_TO_BE_REPLACED

You could see the relationship at work on a practical level. Repertoire for two players at the same piano requires a certain choreography. There’s just one of each pedal to share, and the hand crossings left and right — which can be so fun to watch a soloist pull off — get more complicated when another person’s involved. At times, Pompa-Baldi drew a hand away from the keyboard and into his body, making room for Friscioni, and at the close of a few delicate phrases, the two were crouched together over the same final notes at one end of the instrument. END_OF_DOCUMENT_TOKEN_TO_BE_REPLACED

The signature sounds of these famous film scores are not so much John Williams’ invention as allusions to other classical pieces. The foreboding half-step from Jaws, growing more and more furious in the cellos and basses, shares something with Dvořák’s “New World” Symphony and Bartok’s Miraculous Mandarin. END_OF_DOCUMENT_TOKEN_TO_BE_REPLACED