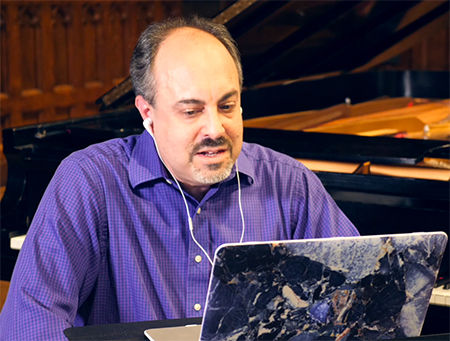 The Cleveland Chamber Music Society writes that they will present twelve free, pre-recorded programs online this fall and winter in two different series, and hope to resume live concerts with five performances between March and May.

“Safe With Sound,” a series produced by the Society and hosted by series Artistic Director Eric Charnofsky (above), will include music and conversations with artists featured on the CCMS series. The first episode, spotlighting the Imani Winds, is already available. Upcoming programs will feature James Ehnes and Andrew Armstrong, the Takacs Quartet, and the Bennewitz Quartet (who will be performing an exclusive, full-length concert).

ChamberFest Cleveland has shared a new video of the Brahms Horn Trio from Season 8, prior to its public release. Watch the June 22, 2019 performance by violinist Diana Cohen, hornist William Caballero, and pianist Roman Rabinovitch here, and plan to tune in to WCLV on November 11, when rebroadcasts of performances resume. “For the full schedule of dates, artists, repertoire and programs notes, please reply RADIO! to info@chamberfestcleveland.com.”

German violinist, clarino trumpet player and composer Johann Christoph Pezel departed this life on October 13, 1694, having served as Stadtpfeifer and Stadtmusicus (a member of the municipal wind band) in Leipzig and Bautzen. His music is frequently played these days by modern brass ensembles, but ensembles were more complex in Pezel’s time. As an example, listen to his Sonata Ciacona a 6 in a performance by ACRONYM here (there’s a score to follow).

In 1912 on this date, Moravian-American composer Hugo Weisgall was born in Ivancice, then part of the Austro-Hungarian Empire. He moved with his family to the U.S. at the age of eight, studying at Peabody and Curtis, and completing a doctorate in German literature at Johns Hopkins — which made him a valuable aide-de-camp to General George S. Patton during World War II.

In addition to his interest in Jewish cantorial music, Weisgall is known for his operas (especially Six Characters in Search of an Author) and extended song cycles, including Soldier Songs. The latter preserves a Wilfred Owen poem Weisgall set after investigating the mistreatment of Germans by Czechs in the hospital at Terezin. Listen here to Six Characters as performed by Chicago’s Lyric Opera Center for American Artists. There don’t seem to be any recordings of Soldier Songs — enterprising baritones, take note!

We highlighted English-born violist and composer Rebecca Clarke in the Diary on her birthdate on August 27, when we recommended a CIM video of her Viola Sonata. She died on this date in 1979 in New York City. Watch here another CIM performance, this time of her 1921 Piano Trio by the Hazel Trio (JuEun Lee, violin Richard Li, cello, and Jonathan Mak, piano) from May, 2019.

It might seem that there’s not a lot left to discover after three decades of experience with the Red Priest’s charming and evocative score, but this performance boasted a secret weapon: the young Spanish violinist Francisco Fullana, now the Orchestra’s artist-in-residence, whose affecting personality and easy virtuosity raised the solo part a quantum leap above the merely extraordinary. END_OF_DOCUMENT_TOKEN_TO_BE_REPLACED

END_OF_DOCUMENT_TOKEN_TO_BE_REPLACED

The Cleveland Orchestra’s second performance of the new season on Sunday afternoon, October 17 at the newly renamed Mandel Hall at Severance Music Center was just such an occasion. If the ensemble’s return to public concerts under the baton of Franz Welser-Möst wasn’t enough reason to light a bonfire, the Cleveland debut of a new work written for one of the Orchestra’s most popular soloists, and the swan song of one of its longest-serving members added extra fuel to the celebration. END_OF_DOCUMENT_TOKEN_TO_BE_REPLACED