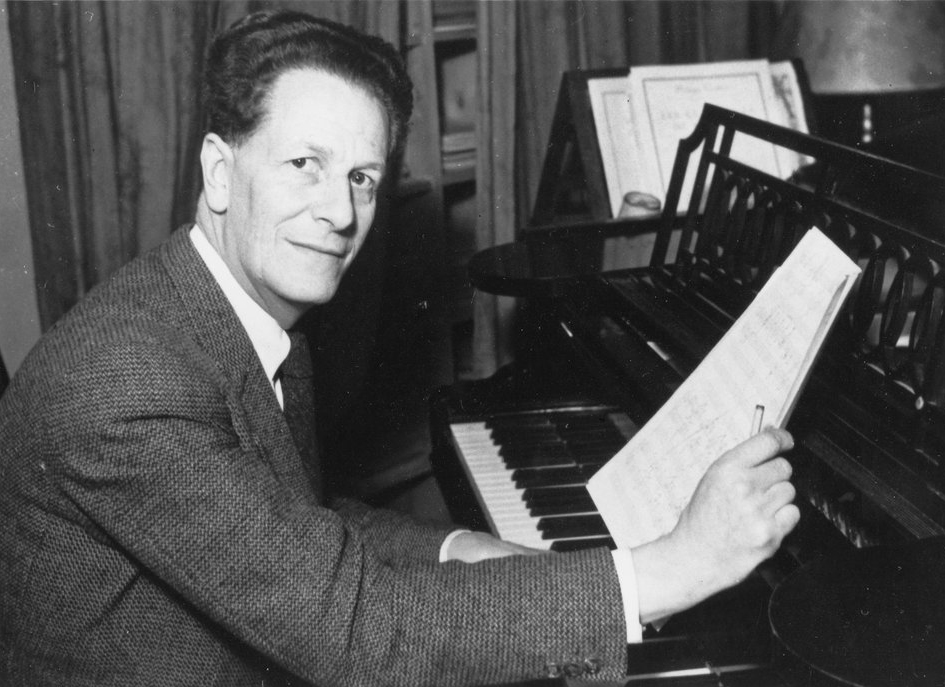 With not a lot going on locally today, let’s mark some anniversaries with tributes by musicians both local and global.

On September 15, 1890, Swiss composer Frank Martin was born in Geneva (he died in the Netherlands in 1974, where he spent much of his career). Martin developed a lean compositional style influenced by Schoenberg’s 12-tone theories, but never abandoned tonality altogether. George Szell programmed his Cello Concerto with Pierre Fournier and The Cleveland Orchestra in October, 1967, two years after it was written. Click here to listen to the live performance.

Austrian organist, conductor, composer, and influential teacher Anton Heiller was born on this date in 1923 in Vienna, where he died in 1979. He was a prolific composer whose works, influenced by Hindemith and Martin (see above), never approached the popularity of his solo performances, which included a series of recitals on the new Fisk organ at Harvard in 1970. Two performances of his organ works include Oberlin alumnus Dexter Kennedy playing his In Festo Corporis Christi in 1971 on the Beckerath organ in Dwight Chapel at Yale, and Simone Gheller playing his Fantasia super Salve Regina on an artist diploma recital on the Fisk organ in Oberlin’s Finney Chapel in 2011.

In 1945, American soprano Jessye Norman was born in Augusta, Georgia. A celebrated opera diva, she sang 85 performances at the Met, including 11 roles in 10 different works. Revisit her artistry in a live performance of Richard Strauss’ Morgen at the 1991 Salisbury Festival inaugural concert on the West Green of England’s Salisbury Cathedral, and — out-of-season but in another cathedral — her 1992 Christmas Concert with the Lyon Opera Orchestra at Notre-Dame in Paris.

Also on this date in 1945, Austrian composer Anton von Webern was accidentally shot to death by an American soldier when he stepped outside his house to light a cigar during the post-war occupation. Webern’s eventually sparse compositional style is contrasted to J.S. Bach’s polyphonic textures in his arrangement of the 6-voice Ricerar from A Musical Offering, performed here by The Cleveland Orchestra led by Christoph von Dohnányi.

In a long New Yorker essay, “Black Scholars Confront White Supremacy in Classical Music,” Alex Ross considers a thorny question with several dimensions. “Living with history means living with history’s complexities, contradictions, and failings…Attempts to cleanse the canon of disreputable figures end up replicating the great-man theory in a negative register, with arch-villains taking the place of geniuses. Because all art is the product of our grandiose, predatory species, it reveals the worst in our natures as well as the best.”

And in a WQXR article, Philadelphia Inquirer critic David Patrick Stearns muses about a new trend in curating classical recordings. “Fascinating, provocative, and bewildering, such discs subvert expectations — not just with names that wouldn’t normally be heard on the same disc. Instead of going deep into a single composer’s psyche, they go broad, reaching into distant centuries and ethnicities, but not superficially. Sure, there’s some gleeful perversity going on, but there’s also a lot of enterprise and thought that allows these interpretive artists a greater means of creative expression. Maybe they don’t compose the music, but they can compose the program, and do so around ideas that are important to them.” Read “Beyond High Concept, Beyond Algorithms: Classical Recording Artists Go ‘Off the Leash’” here.