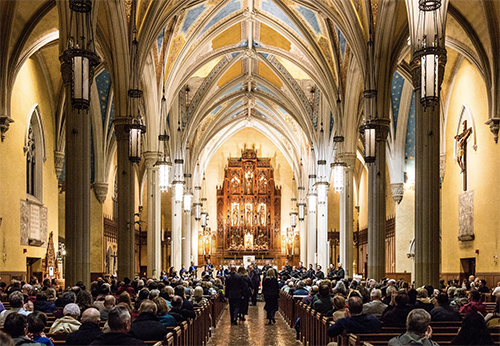 WCLV’s Cleveland Ovations this evening at 8 features “Lux Caelestis,” a concert by Cleveland Chamber Choir conducted by Scott MacPherson that the ensemble presented twice in November, 2019. This publication reviewed the performance at St. John’s Cathedral. Listen at 104.9 FM or on the web.

Intrigued by the sounds singers are able to produce in contemporary music? Stephanie Lamprea gives a livestream workshop in extended techniques this afternoon at 2 in a session designed for singers, instrumentalists, and avant-garde enthusiasts. This might come in handy one of these days, if researchers are ever able to agree on protocols for preventing the spread of the novel coronavirus through singing. RSVP here.

And as always during these distressing times, The Cleveland Orchestra and the MET Opera offer daily doses of past performances to tide us over. At lunchtime, the Orchestra serves up Richard Strauss and a Beethoven quartet movement reformatted for full strings, and this evening, the MET continues its Verdi week with Luisa Miller.

After 25 seasons, the Contemporary Youth Orchestra and its founder and music director Liza Grossman have announced their mutual intention to “move in different directions” for the 2020-2021 season. In the same email message received today, Grossman wrote, “In addition to continuing my relationship with [the rock group] Styx, I will be pursuing conducting opportunities that include recordings and performances.”

Two births and a death to mark today.

American composer, pianist, and critic Arthur Loesser was born on this date in 1894 in New York, the half-brother of Broadway composer Frank Loesser (who he referred to as “the evil of two Loessers”).

His career took him to Cleveland, where he began teaching at the Cleveland Institute of Music in 1926 and from 1953 headed its piano department. He died on January 4, 1969 of a heart attack at the wheel of his car outside CIM.

A witty commentator, Loesser wrote program notes for The Cleveland Orchestra and Vladimir Horowitz, and penned the popular book Men, Women, and Pianos: A Social History. He talked about that book in a two-part lecture at the University of Michigan in July of 1965. Listen here and here.

On August 25, 1958, British composer Ralph Vaughan Williams died in London at the age of 82. His thoroughly English oeuvre reflects a long-standing pastoral tradition that often includes folk song. But he could be equally inspired by literature (John Bunyan’s A Pilgrim’s Progress) and poetry, as in his miraculous setting of George Meredith’s poem The Lark Ascending. Listen here to a performance by violinist Rafael Druian and the Cleveland Sinfonietta, led by Louis Lane.

And on this date in 1960, American saxophonist Branford Marsalis was born in New Orleans. A good way to celebrate would be to enjoy the Marsalis Quartet’s performance at the Jazz Sous les Pommiers festival at Coutances in the French province of Normandy on May 21, 2009. Watch here.

END_OF_DOCUMENT_TOKEN_TO_BE_REPLACED

Although it wasn’t the original plan to go online last weekend for the final round of the James Stroud Classical Guitar Competition, moving to a digital format suited the event well. Young performers Aytahn Benavi, Patricia Hernandez, Ian Tubbs, and Eric Wang played in the intimate setting of their own homes, giving everyone who tuned in a front row seat. END_OF_DOCUMENT_TOKEN_TO_BE_REPLACED

END_OF_DOCUMENT_TOKEN_TO_BE_REPLACED

Joining a long list of arrangers, Parker Ramsay has now transcribed the Variations for the modern pedal harp, an instrument for which he holds a master’s degree from Juilliard, in addition to a degree in history from Cambridge University, plus a master’s in historical performance (organ and harpsichord) and an artist diploma (organ) from Oberlin. END_OF_DOCUMENT_TOKEN_TO_BE_REPLACED