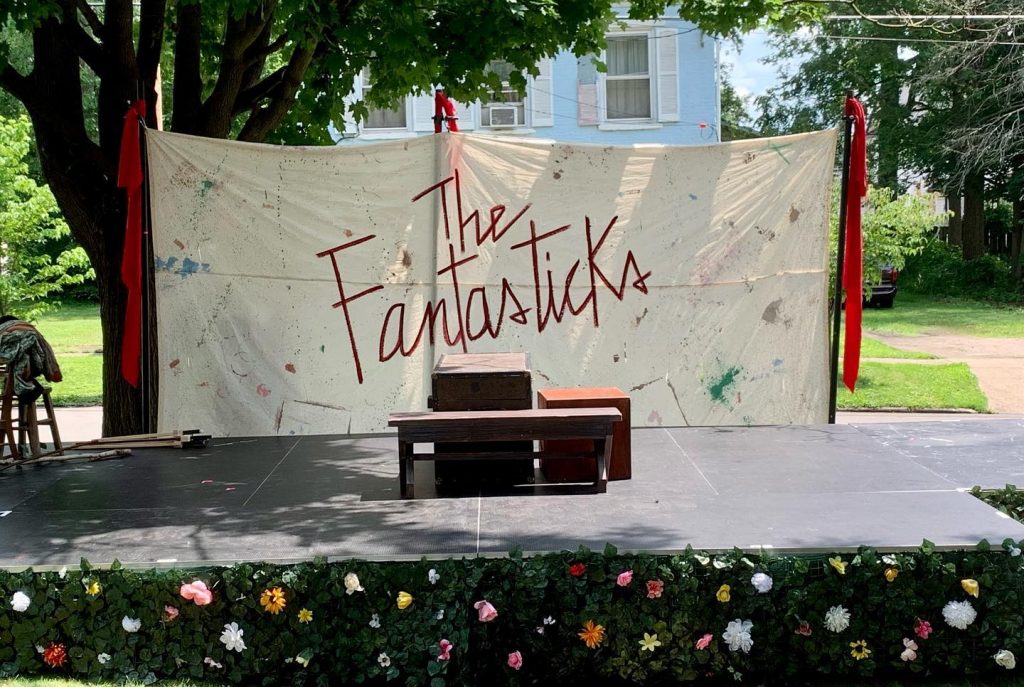 . The Fantasticks at Ohio Light Opera

. Do these three teasers make you want to click through and read the articles?

At 2:00 pm the Ohio Light Opera continues its outdoor run of The Fantasticks on the lawn of the Wayne Center for the Arts in Wooster. In case of rain, the performance will be moved to Freedlander Theatre. Tickets available online.

We’ll quote only the briefest of descriptions for each of this trio of articles culled from today’s Arts Journal. Enticing, or just clickbait?

Daily concert of ships’ horns in the St. John’s, N.L. harbour set to rumble floors. Read about it here on Yahoo News Canada.

Why Did Medieval Cities Hire Street Musicians as First Responders? Get the answer from Ted Gioia’s article on Substack here.

‘Akin to orchestra capture’ — Mthethwa plan gets a public panning. Read about it on Times Live (South Africa) here.

Let’s celebrate the natal days of three avant-garde composers who burst onto the scene on July 20: Nam June Paik (1932, in Seoul, South Korea), Gernot Wolfgang (1957 in Bad Gastein, Austria), and Michael Gordon (1958 in Miami). If these names are new, read and listen on!

Paik, also a mixed media and video artist, was a student of Karlheinz Stockhausen and John Cage, whose moment of notoriety came in 1967 when cellist Charlotte Moorman was arrested for performing his Opera Sextronique topless — although other works of his, like his hommage à john cage, which calls for the destruction of two pianos, stick in the collective memory. Click here to watch a collage of his film and music, selected by musicians who worked with him.

In a review of Wolfgang’s 2016 recording, Passing Through, Lynn Rene Bayley wrote, “Every so often, a recording comes along that is really off the beaten path … so far off, in fact, that it seems to create its own genre … Wolfgang’s music is not just jazz music with a little more form, or classical music that swings. He has found a way to completely blend the two types of music in such a way that there is no real delineation between them … a beautiful and deeply moving listening experience.” Listen to an interview with composer and film-score writer Gernot Wolfgang here.

And Michael Gordon, who co-founded New York’s Bang On A Can Festival along with his wife, Julia Wolfe, and composer David Lang, spent his early years in Nicaragua, moving to Miami at the age of eight. His music has been equally influenced by his experience playing with underground rock bands in New York and his studies at Yale (he currently teaches at the University of Southern California.

Gordon’s 8, for an octet of cellists, belongs to a series of works for multiple players of the same instrument — six percussionists in Timber, seven bassoonists in Rushes, and four electric guitarists in Amplified. Click here to listen to a performance by Cello Octet Amsterdam.

“The eight cellists… are positioned in a circle, and the passages they play travel around the circle in both directions, call-and-response style. If you’re in the middle of the circle, you can hear the dimensionality and perspective of the sound clearly. When listening closely to the recording, you can hear the bass notes traveling in space independently of the melody line. Each cellist plays both the melody and the bass, switching back and forth in a choreography of musical roles.”

Franz Schmidt’s Symphony No. 4 showcased the ensemble, under guest conductor Jonathan Berman, in the standard conventions of a not-so-standard piece. But at the start of the program, the musicians were equal partners to pianist Cédric Tiberghien, whose playing could be as bold as the full orchestra or as intimate as any instrumental solo. END_OF_DOCUMENT_TOKEN_TO_BE_REPLACED

END_OF_DOCUMENT_TOKEN_TO_BE_REPLACED

Jackson began the program with a recitation of Langston Hughes’ poem “Helen Keller” — the first of five poems by Hughes that served as interludes between each piece on the first half. END_OF_DOCUMENT_TOKEN_TO_BE_REPLACED

Pianos with pins and tape on strings, a bass drum and tam tam, crotales, Almglocken, and vibes. Microphones were hooked up all around the instruments. The feed was sent to speakers around the room. Lighting designer Nicholas Houfek hung incandescent globes over the arrangement of instruments from thin black wires stretching across the beams. END_OF_DOCUMENT_TOKEN_TO_BE_REPLACED

From the podium, Elim Chan set an ambitious tone for the evening. The rising star conductor, here in her Cleveland Orchestra debut, has a commanding style, and every twist and turn in Saturday’s performance tracked closely with her baton. END_OF_DOCUMENT_TOKEN_TO_BE_REPLACED