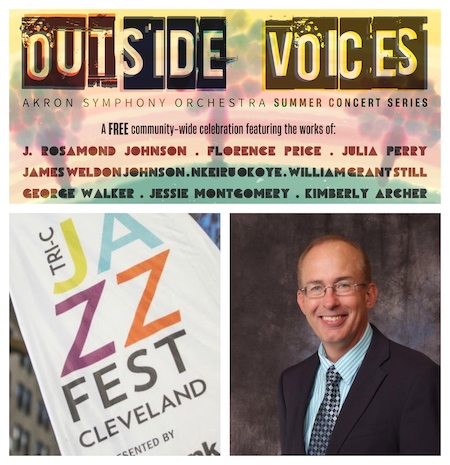 The Akron Symphony has announced its return to the stage with the six-concert Outside Voices series this summer in Akron. The programs will focus on music of under-represented composers who are “outside” the standard repertoire, as well as audience favorites, in addition to highlighting various sections of the orchestra.

Performances take place from June 19 through August 15 at Lock 3, Hale Farm & Village, Goodyear Metro Park, Firestone Park, and Forest Lodge Park. All concerts are free, but the ASO asks for audience members to RSVP, with the bonus of being entered into a drawing for tickets this coming season at E.J. Thomas Hall.

One other concert on the calendar is the orchestra’s June 27 performance to conclude the Bridgestone Senior Players Championship tournament. Read more details about that and the Outside Voices series here.

Looking further ahead, the 42nd Tri-C JazzFest will take place September 11-12 in Cain Park’s covered Evans Amphitheater with a lineup that pays tribute to both the roots of jazz and today’s innovators in the genre. Passes, sold by day, will be available through Ticketmaster beginning on June 10. See the full lineup here.

And the Cleveland Institute of Music announced yesterday that faculty member Marshall Griffith is retiring after nearly 50 years of service, having taught music theory, improvisation, composition, and eurythmics in both the Conservatory and Preparatory divisions. Not going away empty-handed, he received the Distinguished Alumni Award for Composer/Virtuoso in 2014 and will be named Faculty Emeritus on June 1. Read the full announcement here.

And in the virtual realm, the Hamburg International Music Festival presents “A Celebration of Black Music I” at 8 pm. The program features a cast of vocalists that includes tenor Lawrence Brownlee, and music by such names as Florence Price, Margaret Bonds, H. Leslie Adams, George Walker, Damien Sneed, Leonard Bernstein, and many more. View here. 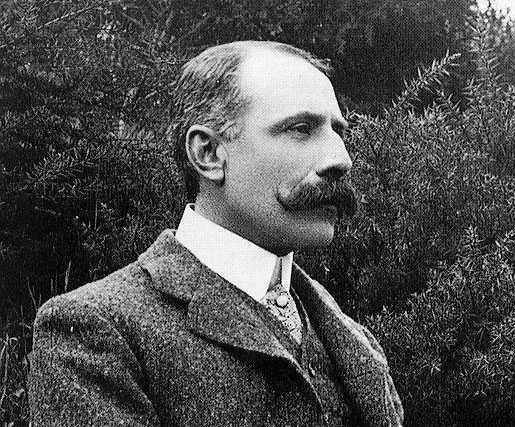 The headliner for June 2 is Edward Elgar, who was born on this date in 1857 in Lower Broadheath, England, outside of Worcester. Among classical musicians, two of his most famous works are the orchestral Enigma Variations (heard here in a 1957 live recording by William Steinberg and The Cleveland Orchestra) and and the oratorio The Dream of Gerontius. And around this time of year, college graduates and families tend to get the trio from his Pomp and Circumstance March No. 1 lodged deep into their brains. (Another opportunity for that: hear Cleveland Orchestra trumpeter Michael Sachs play the famous tune all by his lonesome in a congratulatory message from May of last year).

But on the performing side, did you know that Elgar, in addition to being an excellent violinist, played the bassoon? Perhaps that was part of his inspiration behind the Op. 62 Romance — the other part being the playing of Edwin F. James, who was then the principal bassoon of the London Symphony, and who premiered the work in 1911 with Elgar on the podium.

Here are two recordings of this short, lyrical, and poetic work. One as written, for you to savor the beautiful orchestration (in a performance by bassoonist Klaus Thunemann and the Academy of St. Martin in the Fields, led by Sir Neville Marriner). And another that replaces the ensemble with an organ (another instrument in Elgar’s performing arsenal), for you to enjoy a totally different and more intimate color (played here by bassoonist Sophie Dervaux and organist Wolfgang Kogert).

That second link is a video, but the first one, audio-only, comes with its own visual bonus: for five minutes straight, the sight of Elgar’s full-bodied and stylish ‘stache, with a lushness to match the music.

This year the majority of the concerts are being held at a single location, the magnificent Grove Amphitheatre in Mayfield. Although the venue has no permanent seating, lawn chairs and blankets are the perfect solution. Picnics are encouraged and the responsible consumption of alcohol is permitted. Think Blossom Music Center on a smaller scale and you’ll get the picture. END_OF_DOCUMENT_TOKEN_TO_BE_REPLACED

The series opener, “Legends,” celebrated the return of in-person concerts with music by Antonín Dvořák, Enrique Granados, Paul Wiancko, and Franz Schubert. The musicians displayed the wide range of expression and color, enchanting communication, and technical brilliance that chamber music can provide. END_OF_DOCUMENT_TOKEN_TO_BE_REPLACED

Music director Franz Welser-Möst set the stage in his introductory video remarks, describing the Berg era as “the ‘Roaring 20s’ aftershock of World War I, a blooming of musical styles never experienced before or since.” END_OF_DOCUMENT_TOKEN_TO_BE_REPLACED

Aside from that, the beautifully curated program primarily features captivating performances of solo works that are presented in a logical progression of sound and temperament. END_OF_DOCUMENT_TOKEN_TO_BE_REPLACED

END_OF_DOCUMENT_TOKEN_TO_BE_REPLACED

Henderson began the evening with his own arrangements of three movements from J.S. Bach’s Suite No. 4 for solo cello. The Prelude features a series of descending patterns interspersed with virtuosic passages, and while these passages effectively highlighted Henderson’s technical skills, he also demonstrated dramatic expertise by playing each descending pattern with different nuances of emotion. The Sarabande, with its poise and stately pace, was juxtaposed beautifully with a lively Bourrée, where notes flurried in quick succession, but Henderson never sacrificed precise articulation for musical momentum.  END_OF_DOCUMENT_TOKEN_TO_BE_REPLACED