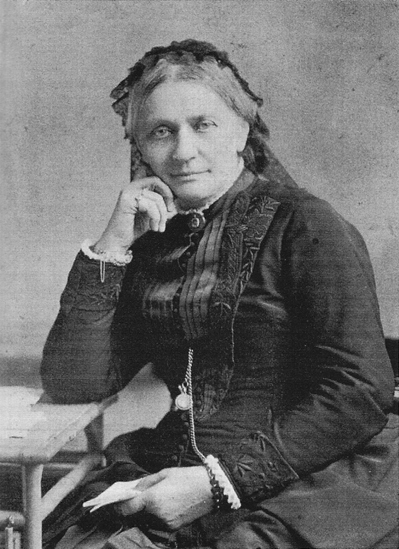 On this date in 1896, Clara Wieck Schumann died in Frankfurt am Main. The pianist, teacher, and wife of Robert Schumann was known principally as a concert pianist, a career she pursued for more than six decades — four of them after Robert’s death in 1856.

She also composed sporadically through most of her life, including two piano concertos (the second unfinished), choral and vocal pieces, and other occasional works. Two chamber works stand out: her Three Romances, op. 22 and the Piano Trio in g, written in 1846 just before she turned 27.

Click here to watch a performance of the Romances by Rebecca Benjamin and Christine Hill in Mixon Hall at the Cleveland Institute of Music, and here for a performance of the g-minor work by the Atos Trio (Annette von Hehn, violin, Thomas Hoppe, piano, and Stefan Heinemeyer, cello) in a live concert at the Konzerthaus in Berlin.

Being good Romantic-era icons, the lives of Clara and Robert Schumann have proven film-worthy. The oldest movie, Träumerei, dates from 1944, followed by The Song of Love in 1947 (with Katharine Hepburn playing Clara), Frühlingssinfonie in 1983, and Geliebte Clara in 2008.

If you have an hour and three-quarters to spare and want to brush up on your German, Geliebte Clara is available here (no subtitles!)

The Cleveland-based ensemble Trobár Medieval was scheduled to perform on New York’s Gotham Early Music Scene series this spring. Instead, they offer a condensed version of their Godi, Firençe! program from the same festival on May 9, 2019. Watch the video by Oliver Weston and Elena Mullins here.

END_OF_DOCUMENT_TOKEN_TO_BE_REPLACED

We begin with the world premiere recording of Okeanos, Bernd Richard Deutsch’s concerto for organ and orchestra, featuring Paul Jacobs as soloist. The title refers not only to the Titan of Greek mythology, but also “to an idea of immense (and sometimes unfathomable) greatness and breadth, which conjures up in my mind the thought of the organ,” as Deutsch writes in his notes. END_OF_DOCUMENT_TOKEN_TO_BE_REPLACED

If you haven’t already warmed up to French Baroque clavecin music, Chicago-based keyboardist Jory Vinikour’s L’Unique: Harpsichord Music of François Couperin should make a strong impression on your musical tastes. The most prominent member of a musical dynasty second only to the German Bachs, François Couperin left a large treasure trove of keyboard works, 234 in all, arranged in 24 suites or Ordres.  END_OF_DOCUMENT_TOKEN_TO_BE_REPLACED

After weeks of watching online streams of archived concerts and ad hoc performances from quarantined musicians’ living rooms and bedrooms, it was thrilling to be able to advertise, preview, and report on two real-time webcasts last Friday and Saturday that embraced high production values and addressed the persistent issue of how to compensate musicians for online services. Saturday afternoon’s joint recital by Colin Davin and Jason Vieaux was sponsored by the Cleveland International Classical Guitar Festival, whose 2020 iteration, scheduled for that weekend at the Cleveland Institute of Music, vanished in the wake of the pandemic. END_OF_DOCUMENT_TOKEN_TO_BE_REPLACED