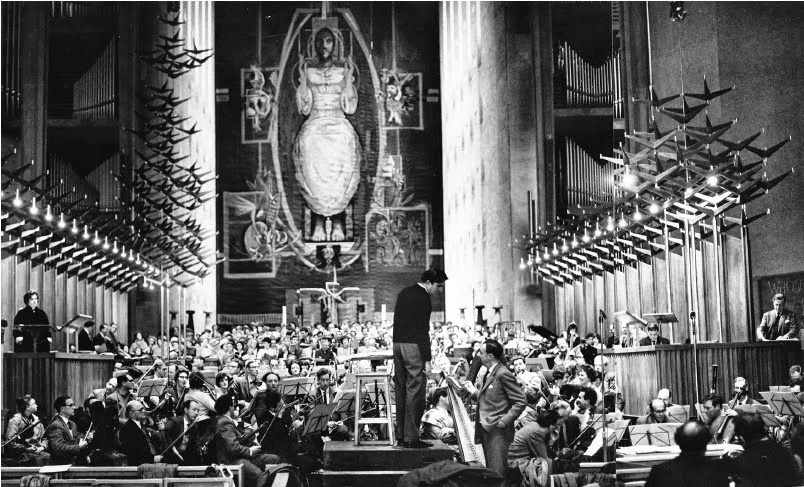 The performance not to be missed this weekend is the rebroadcast of the concert that opened The Cleveland Orchestra’s 2003-2004 season. On September 25 and 27, Franz Welser-Möst led the Orchestra and Chorus in Benjamin Britten’s War Requiem, the subject of Sunday’s 4:00 pm Cleveland Orchestra on the Radio program on WCLV 104.9 Ideastream and wclv.org.

Commissioned for the opening of the new Coventry Cathedral after the destruction of the Medieval building in World War II and first performed on May 30, 1962 by the City of Birmingham Symphony conducted by Meredith Davies, and the Melos Ensemble, conducted by the composer, the work strikingly interleaves anti-war poetry by Wilfred Owen in between movements of the Latin Mass.

The Jupiter and Jasper String Quartets have collaborated on a new album to be released on February 5 on Marquis Classics. As Jupiter violist explains in a press release, “the Jasper and Jupiter quartets are brought together by many dimensions of connection. There are siblings — J Freivogel from the Jaspers is the younger brother of Jupiter members Meg and Liz Freivogel; spouses — Rachel Henderson Freivogel and J are married in the Jaspers, and Daniel McDonough and Meg are married in the Jupiters; and longtime friends —Nelson Lee and Karen Kim were apartment mates while they were college students in Boston, and both they and Sam Quintal are enduring friends and colleagues of all of the quartets’ members, with relationships stretching back two decades.”

The album includes the premiere recording of Dan Visconti’s Eternal Breath (2011), Osvaldo Golijov’s Piazzolla tribute, Last Round (1996), and the Mendelssohn Octet, in which the 16-year-old composer “weaves all kinds of deft and subtle conversations among the eight musicians, in every possible combination.”

Visit the Jasper and Jupiter Quartet websites for ordering information.

The International Contemporary Ensemble — no, not Immigration Customs Enforcement, in case you were worried — is looking to connect with new artists and get to know their work in 2021.

In an e-message, ICE invites individual creators or creators’ collectives in the practice of performed sound (composers, sound artists, generative music makers, or __________) to collaborate with us over an 18-month period starting in April 2021. Selected artists will be commissioned for a new work to be premiered at one of our concerts during the upcoming concert season. Commission fees start at $4,000, and selected artists will also receive remote workshop and rehearsal opportunities with the Ensemble’s musicians throughout the process. Two of the selected artists will be supported through a generous partnership with the Jerome Foundation.”

More information, including other opportunities to collaborate with the Ensemble will be available in an online information session on January 12. Interested parties are invited to submit questions beforehand by email, and a list of Frequently Asked Questions is available here.

On Saturday, celebrate the birth in 1839 of John Knowles Paine, in Portland, Maine, one of the first American composers to gain widespread acclaim for their orchestral music, along with his colleagues of “The Boston Six:” George Chadwick, Horatio Parker, Arthur Foote, Edward MacDowell, and Mrs. H. H. A. (Amy) Beach.

Paine studied in Germany, and on his return to the U.S. in 1861, became Harvard University’s first organist and choirmaster. Free courses he taught in music appreciation and theory led to the founding of the first American academic music department and his appointment as the country’s first professor of music.

Paine is celebrated for his symphonies and his Mass in D, but here are two period pieces that imbibe the flavor of his era. His 1903 Hymn to the West, performed here in a version for orchestra alone by the National Gallery Orchestra, was the official hymn of the 1904 Louisiana Purchase Exposition in St. Louis. And the fourth variation and fugue from his Concert Variations on the Austrian Hymn receives a revival from students at Indiana University of Pennsylvania.

Thinking of Lincoln Center, which sits dark and empty at this stage of the pandemic, turns thoughts to the anniversaries of Rudolph Bing (born in Vienna on January 9, 1902) and George Balanchine (in Georgia in 1904). Bing, who oversaw the MET Opera’s move to Lincoln Center in 1963, was famously described by New York Times critic in 1990: “Wielding his powerful position at the Metropolitan Opera with intense personal charisma over two decades, Sir Rudolf Bing ruled much of the operatic universe in autocratic fashion, nurturing young artists and cutting superstars down to size with equal enthusiasm).” He once fired Maria Callas.

And Balanchine co-founded the New York City Ballet with Lincoln Kirstein, for which he choreographed works by Hindemith (The Four Temperaments), Stravinsky (Firebird, Agon), and other contemporary composers, in addition to his durable Nutcracker, which has been performed every year by the company. Watch his choreography to Hindemith’s The Four Temperaments here.

We mentioned Benjamin Britten earlier. His teacher, British composer Frank Bridge, died on January 10, 1941 in Eastbourne. For a taste of Bridge’s own music, here’s a rare performance of his Piano Quintet from the “Forgotten Romantics Series” at the Australian National Academy of Music, and his setting of Music When Soft Voices Die from a ChamberFest Cleveland performance in Reinberger Chamber Hall in 2016.

Northeast Ohio’s Les Délices has long been that rarest of beasts: a world-class organization so proud of its region (ours) and repertoire (distinct niches in pre-1800 music) that it never tries to be everything to everyone, paradoxically making a strong case for a broad, curious international following. In the December episode of its SalonEra series, the ensemble embraces its strengths and community to marvelous effect. END_OF_DOCUMENT_TOKEN_TO_BE_REPLACED

END_OF_DOCUMENT_TOKEN_TO_BE_REPLACED

Another I remember fondly is Gian Carlo Menotti’s Amahl and the Night Visitors.  Commissioned by NBC, the one act, made-for-television opera, premiered on December 24, 1951, at the network’s studios in New York’s Rockefeller Center. And now, through the wonders of technology, Cleveland Opera Theater has created a magical new production of the work which is available on demand through January 6, 2021 (Three Kings Day). END_OF_DOCUMENT_TOKEN_TO_BE_REPLACED

Jessen has now followed up with her second solo CD, Winter Chapel. Recorded on January 17, 2020 in Oberlin College’s Fairchild Chapel and available on Carrier Records, the album is a continuum in Jessen’s journey to push the musical boundaries of her instrument and herself as an improviser. END_OF_DOCUMENT_TOKEN_TO_BE_REPLACED