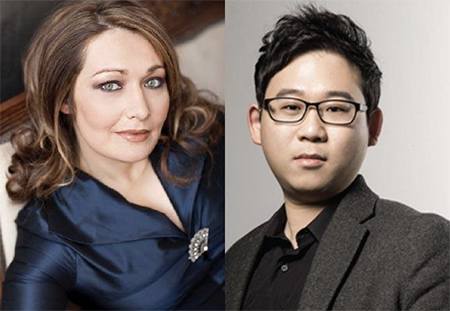 Since the critic Theodor Adorno praised a string quartet as “latent opera” decades ago, it has become common to compare particularly cohesive, dramatic, or narrative events or artworks to opera. Present-day journalists often use the word “operatic” to connote high drama even in non-musical situations. When soprano Dina Kuznetsova and pianist Hyun Soo Kim performed a stunning selection of art songs on Sunday, November 18 at Pilgrim Church in Tremont, the concert felt like “latent opera” even before an encore pulled events into the realm of the truly operatic.

Already a star in the operatic firmament, Kuznetsova arrived at the Arts Renaissance Tremont series having recently sung iconic roles on important stages, and assumed a teaching post at the Cleveland Institute of Music. Expectations ran high, and she and Kim rose to the occasion.

In Kim’s hands, the Church’s current piano, a beautiful specimen on loan during the rebuilding of the house Steinway, evoked the ripples of a stream as he and Kuznetsova launched into a set of Fauré songs with Au bord l’eau. Kuznetsova’s command of French diction, as well as her ability to shape melodies as continuous currents of energy, became apparent as she continued into Après un rêve and Les donneurs de sérénades. Clair de lune sounded appropriately fluid, with Kuznetsova’s tone floating forth from Kim’s sparkling piano textures and rushing up into a pristine high register. In Notre amour, she escaped Fauré’s tightly coiled harmonic spring in a moment of pure, thrilling vocal catharsis.

Tchaikovsky’s Sleepless Nights provided the soprano one of many opportunities to fill the rotunda with effortless vocal power, and Cradle Song found her demonstrating remarkable consistency of tone. The outpouring of Not a Word, My Friend hardly prepared listeners for the subtler but more affecting Was I Not Like Grass in the Lea?, a one-person chamber opera disguised as a song. Does the Day Reign? brought a sense of lift.

Rachmaninoff’s gorgeous Do Not Sing, Beauty gave both performers plenty to work with, each expanding their sound to the dimensions of the room. Poulenc’s Banalités supplied the duo with selections of both impressionist sparkle (“Chanson d’Orkenise”) and modern motion (“Voyage à Paris”). Kim’s opening chords and Kuznetsova’s smoldering pitch bends starred in “Hôtel,” a program highlight, and the soprano handled each word of “Sanglots” with sensitivity.

The program’s concluding examination of folk expressions, both simulated and real, began with Bernstein’s Piccola Serenata, a faux-Yiddish song that engaged Kuznetsova’s full range. Kim maintained focus on the habanera bass of Weill’s Youkali, a tango in which the narrator’s longing for refuge takes on an edge of desperation. The groovy feel of Olshanetsky’s I Love You Much Too Much hardly held Kuznetsova back from soaring into her high range near the end.

The program proper ended with folk songs from the collaborators’ birth countries: the Korean Arigang, which appeared in a haunting arrangement involving both singing and muted humming, and the Russian Gori, Gori, Moja Zvezda, which shimmered.

An encore brought the pair back for the “Song to the Moon” from Dvořák’s Rusalka. At last, the audience experienced the sort of operatic storytelling that had lain behind this tour de force of a performance the whole time.

Jackson began the program with a recitation of Langston Hughes’ poem “Helen Keller” — the first of five poems by Hughes that served as interludes between each piece on the first half. END_OF_DOCUMENT_TOKEN_TO_BE_REPLACED

Pianos with pins and tape on strings, a bass drum and tam tam, crotales, Almglocken, and vibes. Microphones were hooked up all around the instruments. The feed was sent to speakers around the room. Lighting designer Nicholas Houfek hung incandescent globes over the arrangement of instruments from thin black wires stretching across the beams. END_OF_DOCUMENT_TOKEN_TO_BE_REPLACED

From the podium, Elim Chan set an ambitious tone for the evening. The rising star conductor, here in her Cleveland Orchestra debut, has a commanding style, and every twist and turn in Saturday’s performance tracked closely with her baton. END_OF_DOCUMENT_TOKEN_TO_BE_REPLACED