On Tuesday, May 10 at 7:30 pm at Plymouth Church, the Dover Quartet will make their Cleveland Chamber Music Society debut with a program featuring works by Mieczysław Weinberg, Leoš Janáček, and Robert Schumann. A Pre-concert lecture by Francesca Brittan will begin at 6:30 pm.

I caught up with cellist Camden Shaw by telephone and began our conversation by asking him to say a few words about their program.

“Weinberg has recently become more well-known than in the past. He wrote seventeen quartets and often sent them to Dmitri Shostakovich for review. Apparently they were good friends and his music is similar in language to Shostakovich. In this quartet you can hear the same manic intensity as in Shostakovich’s works It’s built in a symmetrical form —  beginning and ending with slow, brooding, almost ancient-sounding material. There’s an intensive outburst in the middle section — before you realize it you’re thrown from the frying pan into the fire, but you survive and come out unscathed on the other side. It’s a short but potent experience.”

“Janáček only wrote two quartets, and they’re both based on the intertwining of love, lust, and insanity. The first quartet is about a husband who kills his wife because she cheats on him. This one is based on his own personal experience and is more about unrequited love and obsession. He wrote more than 700 letters to with Kamila Stösslová who was 38 years younger, and married — as was Janáček. She did respond to his letters but was very clear that there was nothing reciprocal in the infatuation. It’s a very beautiful quartet. There are moments where his wife is imitated — in the opening there’s a ponticello statement that represents his wife sneering at him. It’s beautiful, but in a way, disturbing.”

“We had the pleasure of playing this quartet in the house where Schumann was living at the time he wrote it. It’s a challenging piece but his writing is interesting in that it’s not obviously difficult to listeners. It’s very pianistic, which makes it difficult on string instruments. This is his first quartet, but his use of color and texture in his writing is at a very uncommon level. There were very few composers who wrote good quartet music right from the get-go. Obviously Beethoven did, but it even took Haydn a while — although he invented the quartet, so he gets a free pass. The ten celebrated quartets of Mozart are some of the greatest pieces ever written but it took him a while to get there too. Mendelssohn sounded great right away, but he was sort of copying Beethoven. So in that sense, the Schumann is significant. Here you have a composer who decides to write a quartet for the first time and right away it’s an important work. He’s not copying anyone and it’s very well-written. It’s a special piece and it proves that Schumann deserves more credit than he’s often given for being a real genius in the composing world. The fiery last movement is a great program-ender.”

Shaw said that all four members of the Dover Quartet entered the Curtis Institute of Music with the intention of becoming professional chamber music players. “Everyone goes into that school with an idea of what their career is going to be. Many end up changing their minds, but the four of us had the goal of being in a chamber ensemble from the beginning, and that never changed.”

Prior to coming together as a quartet, violist Milena Pajaro-van de Stadt and Shaw had played in groups together from the time they were seventeen years old, and were on the lookout for violinists who were interested in forming a quartet. At the same time, violinists Joel Link and Bryan Lee had just lost their own quartet’s violist and cellist to graduation.

“We brought our two halves together,” Shaw said. “We like to say that we were a topless quartet and they were a bottomless quartet — which would certainly sell tickets on its own. The nice thing was that when we formed there were already years of experience between the two pairs, so in a sense the age of the group is deceptive.” 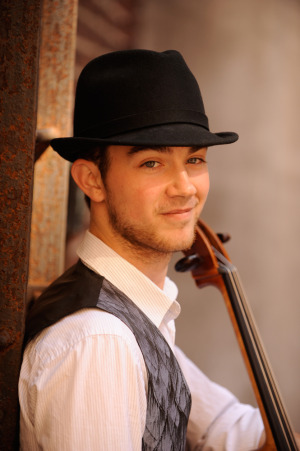 Shaw is quick to credit the coaches they’ve had the privilege of working with along the way. At Curtis they were mentored by three members of the Guarneri Quartet, and by Shmuel Ashkenasi of the Vermeer Quartet, who Shaw said was the person who told them to stay together professionally. “We studied with many amazing people, and the old adage that it takes a village to raise a child was certainly true for us. But Ashkenasi was the guy who got us started, and we still try to play for him whenever we can.”

After graduating from Curtis the Dovers enrolled in the string quartet master’s program at Rice University where they studied under the tutelage of Norman Fischer, James Dunham, and Ken Goldsmith. “That was an important phase in our development because for the first time we were only focusing on quartet playing. It was an incredibly focused environment, and I think that really laid the groundwork for winning the Banff competition.”

When asked about endeavors outside of music Shaw chuckled, saying that at this point, their busy performing schedule leaves them with very little, if any free time. And although that’s difficult it’s also rewarding. “One of the things we all love about chamber music is the obsessive search for expressive potential. I wouldn’t say perfection in a hollow sense, but rather, realizing potential. We’re all obsessive people, so the idea of focusing on one thing and doing it as well as we can possibly do it is very attractive to us.”

Still, the Dover’s professional life is not all about the quartet. Joel Link, Bryan Lee, Milena Pajaro-van de Stadt, and Camden Shaw all participate in the Atrosphere Festival in Fayetteville, Arkansas, where they serve as four of the principals in the string section of the festival orchestra. “It’s very refreshing to be able to do a totally different type of playing.”

The Dover Quartet is also socially conscious and dedicated to sharing their music with underserved communities through their involvement with Music for Food. Founded by Kim Kashkashian, the organization, which has chapters in ten cities including Cleveland, enables musicians to fight hunger in their home communities.

“Hunger and malnutrition are much bigger issues here in the States than most of us realize, because it’s part of a world that most of us don’t see,” Shaw said. “But there are so many families who are not able to feed their kids healthy or even regular meals. We’re based in Philadelphia, which is a wonderful city with so much to offer, but it also has a lot of poverty. That’s something that hits close to home for us because it is not far from our front door. Music nourishes, but usually that nourishment is more spiritual in nature. So when we donate food or money to food pantries through music it is a recognition of the potency  of music, and the power that it carries in improving people’s lives.”

Published on ClevelandClassical.com May 7, 2016.

END_OF_DOCUMENT_TOKEN_TO_BE_REPLACED

Rodgers & Hammerstein’s Cinderella was originally produced for television in 1957 — seven years after the animated Disney film was released — and starred Julie Andrews. According to the Rodgers & Hammerstein website, it was viewed by over 100 million people. END_OF_DOCUMENT_TOKEN_TO_BE_REPLACED

The story line has its origin in an 1855 play and an 1842 farce that Thornton Wilder mined for his 1938 play The Merchant of Yonkers. When that turned out to be a flop, in 1954 Wilder made the crucial decision to re-center the show around the character of the legendary marriage broker Dolly Gallagher Levi and renamed it The Matchmaker. END_OF_DOCUMENT_TOKEN_TO_BE_REPLACED

The Dodero Center for the Performing Arts at the Gilmore Academy in Gates Mills is one feature of an impressive campus. The auditorium is shallow, the stage is deep, and the ensemble played without a shell. Throughout the program, the sound, especially in instruments’ lower registers, tended to disappear. END_OF_DOCUMENT_TOKEN_TO_BE_REPLACED