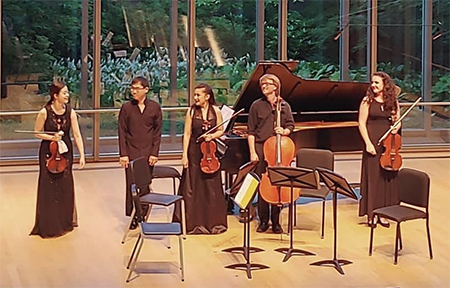 ENCORE Chamber Music continued its third season on Friday, June 29 in CIM’s Mixon Hall with an enjoyable concert celebrating “music written and inspired by fiery female artists” and entitled “Nasty Women.” This reference is to Donald Trump’s ad hominem attack on Hillary Clinton during the third presidential debate, which many liberal women immediately adopted as a badge of honor.

But without program notes or more extensive comments beyond director Jinjoo Cho’s mention of “gender equality” in her introduction from the stage, the political nature of the event quickly dissipated. The result was a lovely concert of music by two female and two male composers.

British composer George Benjamin is best known for his gorgeously bracing Written on Skin that took the opera world by storm earlier this decade. He was commissioned by composer friend Tōru Takemitsu to write a work for two violists, Yuri Bashmet and Nobuko Imai. The result was his Viola Viola (1997), which beautifully intertwines the two instruments to strange, yet luscious effect. The excellent Rebecca Albers and Maiya Papach, who are married, were completely comfortable in this hocketing soundscape of odd clashes against a pained calm.

Israeli-American composer Shulamit Ran’s 2008 string sextet has all the elements of a unsettling, tragic story with its singing cello melodies and glorious three-part paired-octave textures in the violins (Dami Kim and Isabelle Durrenberger), violas (Albers and Papach), and cellos (Blaise Déjardin and Max Geissler). It is fitting that after completing the music, she chose the mythic Lyre of Orpheus for its title. The ensemble played Ran’s haunting and haunted music with conviction.

Francis Poulenc’s Improvisation No. 15 in C minor, Hommage à Édith Piaf, is a tuneful morsel (or as the composer and the chanteuse might say, morceau). This short piano work from 1959 — near the end of both their lives in 1963 — is the last of his Improvisations, which were written over three decades. Never afraid of a cabaret-style tune, Poulenc’s tribute to the great singer and songwriter is full of charm. Playing an arrangement by Orfeo Mandozzi, cellist Déjardin spun out its graceful melodies with ample sophistication, and pianist Hyun Soo Kim accompanied with equal poise. 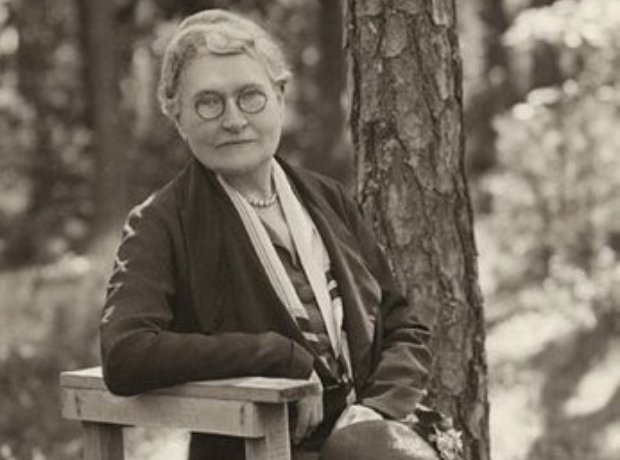 Amy Beach (above) was probably the best traditionalist composer in the United States at the turn of the 20th century. Her few large-scale works and songs outshine her mostly-forgotten male New England peers, and stand as a sturdy achievement at a time when society believed that women shouldn’t — or even couldn’t — compose. With its memorable melodies and delightful shapes, the 1907 Piano Quintet in F sharp minor shows Beach’s full command of late Romantic style.

Both Kims, Durrenberger, and Geissler were joined by violist Julia Clancy in a dramatic, intense reading of this expansive three-movement work. The grand opening of full keyboard arpeggios with a laser-like drone in strings gratefully returns in the finale, while the deeply felt slow movement shows why Romanticism has never dimmed in the concert hall.

END_OF_DOCUMENT_TOKEN_TO_BE_REPLACED

The strings-only work by Berg has made relatively frequent appearances on the Orchestra’s programs. In 2021, the musicians recorded it for the In Focus series, and it appeared again on last year’s European tour. Friday’s rendition maintained the group’s characteristic light and effortless playing, each section blending as much as possible to echo the work’s original form as a string quartet. At fifteen minutes total, the piece is quite short, but the dense encoded musical meanings require some extra-attentive listening. Splitting up the three movements ensured that each one could be appreciated on its own. END_OF_DOCUMENT_TOKEN_TO_BE_REPLACED