The last “Sunday Unplugged” concert of ENCORE Chamber Music’s fourth season featured off-the-beaten-track works by Bloch, Dvořák, and Bartók in the sauna-like ambiance of the Tudor House music room at Gilmour Academy on Sunday afternoon, July 7. Fans wafting air over tubs of ice water helped cool the faculty and Young Artist performers, while the audience made good use of the stylish plastic hand fans the management thoughtfully provided.

The main curiosity was Bartók’s 1904 Piano Quintet, the product of a 23-year-old who was obviously taken with the music of Liszt and Strauss, but hadn’t yet found his unique voice — although there are glimmerings of what was to come in the catchy folk dance that keeps bursting out late in the work. There are opposing stories about what happened to the Quintet after its premiere. One account has it that Bartók suppressed the piece altogether, another that he liked it enough to revise and perform it again later. Its modern revival seems to date from April of 1973, when the Juilliard Quartet performed it with Beveridge Webster at Alice Tully Hall in New York.

Violinists Brendan Shea and Roman Fraser, violist Dimitri Murrath, cellist Max Geissler, and pianist Kwan Yi brought dramatic playing to the grandiose first movement and underlined the mixed meters in the second. Unison strings dialogue with the piano in the third. There, exotic harmonies mingle with sentimental, chromatic melodic lines — and a gesture that is reminiscent of the silver rose theme in Der Rosenkavalier — before segueing into that ethnic-sounding dance, which alternates perhaps a few too many times with a contrasting slow section. During those 45 energetic minutes, the players must have collectively perspired away a pound or three.

The Bartók ended an afternoon that began with a sonorous performance of Ernst Bloch’s Prelude by ENCORE young artists Karen Ferry and Samuele Parrini, violins, and Eunbin Lee, viola, joined by associate faculty cellist Denise Ro. Bittersweet in character, the piece is in Bloch’s signature modal style and its attractive lines and harmonies complement its contrapuntal underpinnings. 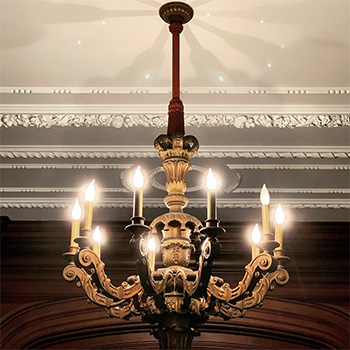 During the summer of 1893, Dvořák wrote two chamber works subtitled “American” while sojourning among his fellow Bohemians in Spillville, Iowa. The string quartet is well known, the viola quintet less so, but equally charming. The latter formed the torso of Sunday’s concert, performed by faculty violinists Brendan Shea and Pasha Sabouri, violists Eric Wong and Julia Clancy, and cellist Max Geissler.

Lilting with folksong-like melody and energized by dotted rhythms in the outer movements, the Quintet is gregarious and amiable. Its scherzoid second movement paused long enough for a lovely viola solo by Wong, and the hymn-like theme of its second movement set up a beguiling chain of variations. A few intonation lapses merely testified to the sultry playing conditions.

Each performance drew whoops and cheers from the largely student-populated audience, who were excited to hear their mentors and peers in action.

The cimbalom was the feature of the show, an instrument capable of taking on many personas. Its performer, Chester Englander, has shaped his career around the instrument, and has inspired composers to write more repertoire for it, some of which was presented on the program. END_OF_DOCUMENT_TOKEN_TO_BE_REPLACED

You wouldn’t expect that acoustic from a glance at the nave, which is wide and long, but not especially lofty. But when I guest conducted a local amateur choir and professional orchestra in Beethoven’s Mass in C there a few years back, during the first rehearsal we released the final chord of the “Gloria” and listened in astonishment for the next several seconds. The sound continued to roll down the space like the big wave that surfers dream about. END_OF_DOCUMENT_TOKEN_TO_BE_REPLACED