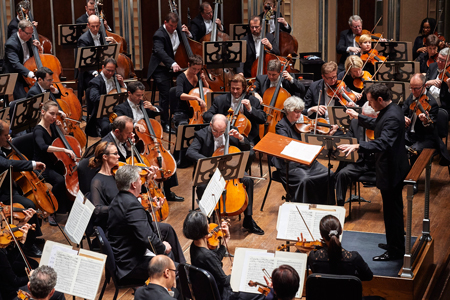 In the closing movements of Hector Berlioz’s Symphonie Fantastique, the full brass section makes a spectacular entrance. In 1830, it must have seemed a sound that had never been heard before. Even in the jaded 21st century, it has a startling sonic complexity — at times as metallic as a locomotive’s firebox, and at others as smooth as the oiled bearings that drive the machine.

Berlioz’s symphonic outpouring about love and obsession is a perfect match with the virtuosity of The Cleveland Orchestra and the acoustics of Severance Hall. Berlioz went all out in the orchestration: two harps, two tubas (actually, in the original, two ophicleides, if anybody’s ever heard of those), two sets of timpani, four bassoons, and as many string players as he could muster.

If the brass dominate the feverish ending of the Berlioz (witches! a guillotine! an opium dream!), in the first movement, the strings set the stage for this extended Romantic tragedy. The Cleveland Orchestra’s string players — clear in tone and dazzling in intonation — engaged the audience almost instantly in the “flux of passion” that Berlioz calls for.

The orchestra’s extraordinary wind players took the vicissitudes of that passion even further, with sardonic riffs in the clarinets contrasting with lyrical ensembles among the principal oboe, flute, and bassoon. The pastoral interlude in the third movement featured the English horn (Robert Walters — more about him below) in a moving dialog with the offstage oboe, played by principal Frank Rosenwein.

The percussion drove the rhythm throughout the work. The sound of the drumbeats that lead the symphony’s hero to the scaffold remains unmistakably modern, even today. (Imagine hearing it only a generation after Beethoven!)

French conductor Lionel Bringuier managed Berlioz’s grand mayhem with grace and evident pleasure. A protegé of Gustavo Dudamel at the Los Angeles Philharmonic, and now music director of the Zürich Tonhalle Orchestra, Bringuier excelled in evoking mood and color in the Impressionist tradition, reveling in Berlioz’s radical orchestrations. There were some ragged entries, where the more precise gestures of his mentor would have been welcome. But overall, it was a joy to hear this inspiring young interpreter in his signature piece (the Berlioz was the keynote of Bringuier’s first program last year in Zürich). 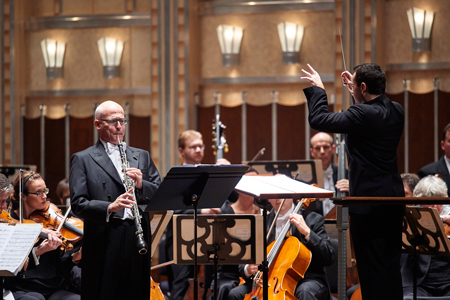 The Berlioz fittingly ended the evening. Before intermission, Robert Walters, the orchestra’s principal English horn, was the elegant and forceful soloist in the world premiere of Bernard Rands’ Concerto for English Horn. The concerto was commissioned by the Oberlin Conservatory of Music in commemoration of its 150th anniversary and in honor of Walters’ service as Professor of Oboe and English Horn at Oberlin.

The soloistic opportunities for English horn virtuosi are few and far between, and an addition to that instrument’s solo repertoire from the distinguished British-born composer is no small matter. Even more significant is the high quality of the writing in this concerto: accessible and challenging at the same time, it has a melodiousness as well as an energetic, even throbbing intensity.

Rands’ concerto is in three movements, the first a “Fantasia” with swirling and agile lines and a series of powerful interactions between the soloist and other low-registered instruments, including bassoon, bass clarinet, trombone, and tuba.

In the second movement (“Aubade” or dawn-song), Rands evokes the long history of the English horn as a pastoral instrument (as, indeed, in the Symphonie fantastique). Rands’ skillful orchestration supports the soloist with a rich instrumental accompaniment (for example, a shimmering high string sound). 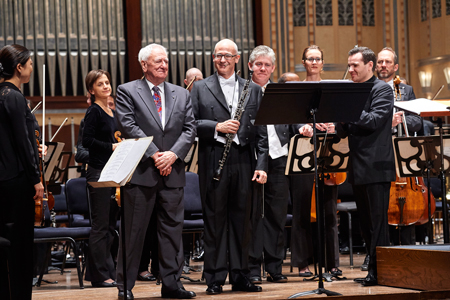 The concert began with a lush performance of Debussy’s Prelude to the Afternoon of a Faun. Principal flute Joshua Smith opened the piece with a sexy evocation of the faun’s languorous desires. The rising passions of Debussy’s fantasia grew almost imperceptibly from that quiet beginning, with solo oboe, violin, and cello adding to the sense of a deeply-felt sensuousness. Bringuier conducted the chamber-sized orchestra with care to keep the arc of increasingly complex sounds from becoming too overbearing.

With delicacy and restraint, the Debussy introduced the themes of dream, fantasy, and desire that, by the end of the evening, were to find much grander realization in Berlioz’s sonic extravaganza. Congratulations to the orchestra for its smart programming, placing these very different yet parallel works, both classics, as bookends to Bernard Rands’ brand-new contribution to the canon.

Franz Schmidt’s Symphony No. 4 showcased the ensemble, under guest conductor Jonathan Berman, in the standard conventions of a not-so-standard piece. But at the start of the program, the musicians were equal partners to pianist Cédric Tiberghien, whose playing could be as bold as the full orchestra or as intimate as any instrumental solo. END_OF_DOCUMENT_TOKEN_TO_BE_REPLACED

END_OF_DOCUMENT_TOKEN_TO_BE_REPLACED

Jackson began the program with a recitation of Langston Hughes’ poem “Helen Keller” — the first of five poems by Hughes that served as interludes between each piece on the first half. END_OF_DOCUMENT_TOKEN_TO_BE_REPLACED

Pianos with pins and tape on strings, a bass drum and tam tam, crotales, Almglocken, and vibes. Microphones were hooked up all around the instruments. The feed was sent to speakers around the room. Lighting designer Nicholas Houfek hung incandescent globes over the arrangement of instruments from thin black wires stretching across the beams. END_OF_DOCUMENT_TOKEN_TO_BE_REPLACED

From the podium, Elim Chan set an ambitious tone for the evening. The rising star conductor, here in her Cleveland Orchestra debut, has a commanding style, and every twist and turn in Saturday’s performance tracked closely with her baton. END_OF_DOCUMENT_TOKEN_TO_BE_REPLACED