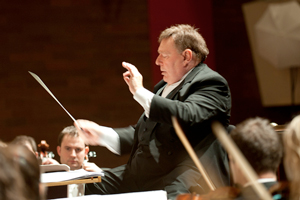 Imagine watching a very fine orchestra as it begins to perform the stirring final movement of a symphony. After only a few bars, the violinists abruptly stop playing and start to tune their instruments. Oh, the indignity! Nervous giggles ripple through the audience as the conductor, clearly mortified by such a cacophonous interruption, glares incredulously at his rude ensemble before continuing.

Such a scenario was actually one of several intentional breaches of symphonic protocol that transpired during the first work on the March 2 program by the Canton Symphony Orchestra at Umstattd Hall. Franz Joseph Haydn’s Symphony No. 60, “Il Distrato” (The Distracted, or The Addle-Minded) was an expansion of the incidental music that he originally composed in 1774 for a comedy by Jean François Regnard. That had to do with a man named Leandre, who was so absent-minded that he nearly forgot to attend his own wedding.

Accordingly, Haydn penned a particularly quirky symphony in six movements, rather than the “normal” four, presented here in keeping with the overall theme of the evening, “Humor in Music.” In mischievously breaking with his own standards of composition that would earn him the epithet, “Father of the Symphony,” Haydn convincingly transformed the orchestra into the persona of the blundering Leandre, creating a work  replete with goofy non-sequiturs and “wrong” music.

For example, the first movement is disrupted by the inclusion of a direct quote from a completely different symphony (No. 45, “The Farewell”). The lovely processional wedding tune in the second movement collides with the sounds of a passing marching band. Elsewhere there are jarring key changes, obtrusive fanfares, and snippets of seemingly random folk tunes. Other than music director Gerhardt Zimmermann’s brief lapse into mock horror at the infamous tuning break in the final movement, he and his valiant ensemble navigated this impish farce with delightfully straight-faced, business-as-usual aplomb.

And now for something completely different: The Carnival of the Animals, scored for two pianos and orchestra in 1886 by Camille Saint-Saëns, and subtitled “a grand zoological fantasy.” Zimmermann took a seat to the side of the orchestra in his role of narrator. Matthew Jenkins Jaroszewicz, CSO Assistant Conductor, directed this tantalizing tour of the animal kingdom from the podium with infectious zeal. The exhilarating narration, full of whimsical puns and tongue-twisting rhymes, was based on the comical verses that Ogden Nash wrote in 1949 to accompany each of the work’s 14 movements. Zimmermann inserted some hilarious improvisations of his own, including a much-anticipated singing passage that was more a raucous chant than an actual song, though nonetheless endearing in its throaty chutzpah.

An old show business maxim admonishes, “Leave them laughing when they go.” So it was on this occasion with the final work on the program, Jacques Ibert’s wild, six-movement romp from 1929, Divertissement. The orchestra was clearly very eager to embark on this frenetic excursion into musical eclecticism that included some mild skewering of works by Jacques Offenbach and Johann Strauss Jr. It all ended with a zany evocation of a Keystone Kops chase scene, complete with Zimmermann frantically blowing a police whistle. And so yes, mission accomplished. We left laughing.

Something else, however, lingered long after. Despite all of the evening’s boisterous, tweak-your-nose humor, I was left remembering, thankfully, the evening’s most quietly compelling performance — the second (Andante) movement of Dmitri Shostakovich’s Piano Concerto No. 2, composed for his son, Maxim, in 1957.

Before the intermission, pianist Jeffrey Biegel had regaled us with an utterly stunning rendition of the work, which is for the most part playful, untroubled, and certainly witty. Biegel’s virtuosity was breathtaking, his technique in executing the work’s lavish trills and muscular arpeggiations clear, concise, and thrilling throughout. But it’s the second movement — ironically, anything but humorous — that lifted me up into Biegel’s mesmerizing state of impassioned lyricism. In this protracted moment of emotive profundity, his playing was a warm, slow pouring out of rapturous grace.

END_OF_DOCUMENT_TOKEN_TO_BE_REPLACED

Rodgers & Hammerstein’s Cinderella was originally produced for television in 1957 — seven years after the animated Disney film was released — and starred Julie Andrews. According to the Rodgers & Hammerstein website, it was viewed by over 100 million people. END_OF_DOCUMENT_TOKEN_TO_BE_REPLACED

The story line has its origin in an 1855 play and an 1842 farce that Thornton Wilder mined for his 1938 play The Merchant of Yonkers. When that turned out to be a flop, in 1954 Wilder made the crucial decision to re-center the show around the character of the legendary marriage broker Dolly Gallagher Levi and renamed it The Matchmaker. END_OF_DOCUMENT_TOKEN_TO_BE_REPLACED

The Dodero Center for the Performing Arts at the Gilmore Academy in Gates Mills is one feature of an impressive campus. The auditorium is shallow, the stage is deep, and the ensemble played without a shell. Throughout the program, the sound, especially in instruments’ lower registers, tended to disappear. END_OF_DOCUMENT_TOKEN_TO_BE_REPLACED