Apollo’s Fire and Apollo’s Singers will be led by guest conductor and harpsichordist Joseph Gascho, who teaches on the faculty at the University of Michigan. Vocal soloists include sopranos Molly Netter and Madeline Healey, countertenor Daniel Moody, and tenors Brian Giebler and Jacob Perry.

The cantatas Wer Dank opfert, der preiset mich, BWV 17, and Herr, deine Augen sehen nach dem Glauben, BWV 102, are listed far apart in the numbering system adopted by the edition that began publishing Bach’s works in 1850. Actually, the two works were composed and performed a month apart in 1726 at a very interesting time in the composer’s career.

Bach had arrived in Leipzig in 1723 with the ambitious plan of writing a five-year cycle of Sunday cantatas for voices and instruments. This meant writing, scoring, copying, and rehearsing a new work every week of the year except during the seasons of Lent and Advent. The composer — and his children and students who served as copyists — kept this industry going for two and a half years until 1726, when he suddenly slowed his cantata production and filled holes in the calendar with works by his Meiningen relative, Johann Ludwig Bach.

Joseph Gascho said in a telephone conversation that he doesn’t have any personal theories as to why this slowdown happened, but he finds the cantatas, like all of Bach’s works, to be both challenging and rewarding to the listener. “One aspect of his writing was to give pleasure to the ear, but there’s no way of getting around the fact that it’s complex music that rewards active listening,” he said. “There’s real intellectual joy to be found in his musical textures.”

Gascho went on to say that Bach makes little distinction between the sacred and the secular in his music. “The cantatas, motets, and masses are meant for church, but they contain the same human joy and struggle as any of his secular pieces.” 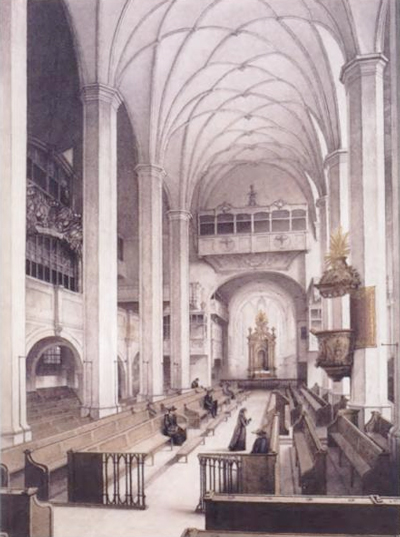 Because Bach’s cantatas were written for the spiritual edification of an 18th-century Lutheran congregation of a Pietist bent, their sentiments can seem alien to a 21st-century audience. “The texts can be controversial or uncomfortable, but they’re part of human nature,” Gascho said. “Their universal spirit allows us to connect, and you’ll find amazing things if you listen closely.”

The second genre to be explored in these concerts is the Motet, represented by Lobet den Herrn, BWV 230, based on Psalm 117. Although he may have written more, only six of Bach motets have survived. Some of them seem to have been intended for funerals, but Bach’s jubilant setting of the shortest Psalm in the Hebrew scriptures must have been composed for another purpose.

“It’s like a concerto for voices,” Gascho said of a piece that’s famous for its long and relentless vocal lines. “Bach didn’t seem to care for anybody’s need for oxygen. He was forcing voices and instruments to their limits.” Although the motets are often performed without accompaniment, or with just organ continuo, Gascho will double the vocal lines with the strings of the orchestra.

The third genre on Apollo’s Fire’s “Sacred Bach” concerts is the Mass — which for Bach and Leipzig meant the Missa Brevis or Lutheran Mass. Though texted in Latin, these pieces contained only the “Kyrie” and “Gloria in excelsis” movements of the traditional Roman Mass.

Bach wrote four such works late in his career, adapting earlier cantata movements and retexting them in Latin in a procedure called ‘parody.’ Apollo’s Fire will include the Mass in G, BWV 236, on this week’s programs.

“This is my first time conducting a Bach Mass,” Gascho said. “They’re not programmed very much, perhaps because parody masses aren’t looked upon quite as favorably as original works — except of course for the great B-Minor Mass. But the Mass in G has a late feeling to it. Its ‘Kyrie’ is intensely chromatic, with a mixture of emotions we tend to associate more with the forward thinking of his sons. It’s in the galant style with a lot of big contrasts put close to each other.”

In Bach’s time, congregations turned out very early on Sunday mornings for a three- to four-hour service that included a lengthy sermon between the two halves of the cantata (hourglasses were prominently displayed in the pulpit to hold the preacher to his contract). Although Apollo’s Fire is dedicated to authenticity, audiences will undoubtedly be happy to hear Bach’s sacred music performed out of context this week.

Music director and conductor Daniel Meyer built his playlist around Cleveland themes and scenes. “Exploration CLE” made use of engaging selections from the classical canon and beyond that celebrated “what makes Cleveland so special.” Happily, he and his musicians avoided constructing a visual slide show, choosing to let the music speak for itself. END_OF_DOCUMENT_TOKEN_TO_BE_REPLACED

You could see the relationship at work on a practical level. Repertoire for two players at the same piano requires a certain choreography. There’s just one of each pedal to share, and the hand crossings left and right — which can be so fun to watch a soloist pull off — get more complicated when another person’s involved. At times, Pompa-Baldi drew a hand away from the keyboard and into his body, making room for Friscioni, and at the close of a few delicate phrases, the two were crouched together over the same final notes at one end of the instrument. END_OF_DOCUMENT_TOKEN_TO_BE_REPLACED

The signature sounds of these famous film scores are not so much John Williams’ invention as allusions to other classical pieces. The foreboding half-step from Jaws, growing more and more furious in the cellos and basses, shares something with Dvořák’s “New World” Symphony and Bartok’s Miraculous Mandarin. END_OF_DOCUMENT_TOKEN_TO_BE_REPLACED