A great thing about chamber music is that it can be performed in any space that can accommodate a small number of musicians while leaving room to comfortably seat an audience. Since 2005, Heights Arts’ Close Encounters Chamber Music Series has found its niche in Cleveland’s vibrant chamber music scene by presenting concerts in intriguing and inviting spaces around the city. The series, coordinated by artistic director Isabel Trautwein, presented its first concert of the season on Sunday afternoon, November 22 at Dunham Tavern Museum in Midtown. From start to finish, the performances of works by Bach and Shostakovich were musically splendid, and provided a listening experience ranging from the celebratory to the heart-rendering.

Bach’s charming wedding cantata Weichet nur, betrübte Schatten,” BWV 202, opened the program entitled BA-Shostakovi-CH. The Cantata celebrates the awakening of romantic love as the world moves from winter into spring. Although Northeast Ohio was moving from fall into winter, the elegant performance, enhanced by the glowing of the sun through the windows, offered reassurance that spring is only a few months away.

Soprano Sandra Simon sang with a clear and supple voice that never became overpowering. Pairing with violinist Miho Hashizume, the two brought a freshness to “When to Spring breezes blow,” and during “To become adept in love,” Simon and oboist Frank Rosenwein performed with sparkling clarity. Joining forces with cellist Timothy Paek and harpsichordist Christopher Bagan, she sang with a delightful sense of urgency during the galloping continuo aria, “Phoebus hurries with swift horses.” Violinist Isabel Trautwein and violist Aaron Mossberg joined Simon and the ensemble for a playfully lilting reading of the concluding “Gavotte.” 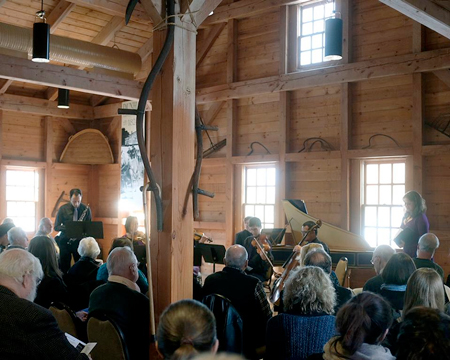 Like Bach, who often used his name as a musical cryptogram (B-flat, A, C, B-natural) in his compositions, Dmitri Shostakovich represented himself with DSCH or D, E-flat, C, B-natural. This motif is prevalent in many of his works, and can be found in every movement of his String Quartet No. 8 in c.

Written at the time the composer was diagnosed with amyotrophic lateral sclerosis as well as being forced to join the communist party — both events leading him to consider suicide — the Quartet, in sharp contrast to the Bach, is dark and brooding. Again nature added her own commentary: as Hashizume, Trautwein, Mossberg, and Paek began the emotionally wrenching work, the sun went behind the clouds, casting eerie shadows across the room. Whether or not the effect was noticed by the players, the performance was superb. Like a well-oiled machine, the performers passed the fast technical passages of the “Allegro molto,” back and forth with precision. Throughout, the group skillfully contrasted a warm blend of tone colors with the cold, steely sound that is needed to bring the piece to its proper, otherworldly conclusion.

Following an enjoyable performance by Christopher Bagan of two movements (Allemande, and Courante) from Bach’s Partita in D, BWV 828, Isabel Trautwein gave a brilliant performance of the composers iconic “Ciaconna in d” from the second violin partita. Arguably one of the greatest pieces of music ever written, the work presents numerous challenges to a performer, all of which Trautwein negotiated with aplomb. Her deft technical ability allowed her room to play the hauntingly beautiful music with élan. The capacity audience, which included a large number of teenagers, rewarded her performance with a heart-felt ovation. And once again Mother Nature added her commentary as sunshine filled the room.

The Close Encounters Chamber Music Series will continue on February 28 with a performance by the Omni Quartet. Click here for details.

Visit the Heights Arts website for information about all of their offerings including the annual Holiday Store.

The cimbalom was the feature of the show, an instrument capable of taking on many personas. Its performer, Chester Englander, has shaped his career around the instrument, and has inspired composers to write more repertoire for it, some of which was presented on the program. END_OF_DOCUMENT_TOKEN_TO_BE_REPLACED

You wouldn’t expect that acoustic from a glance at the nave, which is wide and long, but not especially lofty. But when I guest conducted a local amateur choir and professional orchestra in Beethoven’s Mass in C there a few years back, during the first rehearsal we released the final chord of the “Gloria” and listened in astonishment for the next several seconds. The sound continued to roll down the space like the big wave that surfers dream about. END_OF_DOCUMENT_TOKEN_TO_BE_REPLACED