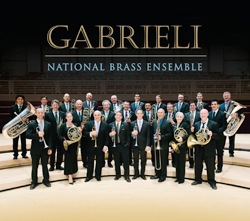 “No composer is more iconic of Venice’s fabled Renaissance splendor than Giovanni Gabrieli,” writes Steven Plank, Andrew E. Meldrum Professor of Musicology at the Oberlin Conservatory of Music, in his informative liner notes that accompany the National Brass Ensemble’s stunningly beautiful CD entitled Gabrieli. A sonic feast, the recording transports listeners back in time to the Venetian Basilica of St. Mark’s.

Performed by members of the orchestras of Boston, Chicago, Cleveland, Detroit, Los Angeles, New York, Philadelphia, and San Francisco, the CD pays homage to the famous 1968 Gabrieli recording featuring players from the orchestras of Chicago, Cleveland, and Philadelphia. The players for this recording were brought together by Michael Sachs, principal trumpet of The Cleveland Orchestra. The story of the project’s genesis is well-documented in the liner notes.

With assistance from Dr. Otto Biba (Director of the Archives at the Wiener Musikverein), who helped locate out-of-print scores with original notation, the recording features new arrangements of Gabrieli’s music prepared by Tim Higgins, principal trombone of the San Francisco Symphony. The CD also includes a new work written specifically for the project by John Williams.

The 16 tracks include a wonderful combination of canzonas and motets. Canzon per Sonar Septimi Toni No. 2 for two choirs, conducted by Gail Williams, makes the perfect opener for the recording. Also conducted by Williams, Hic est Filius Dei (for three choirs) is grand, and Buccinate in Neomenia (for four choirs), conducted by Yasuhito Sugiyama, is majestic. It’s difficult to pick a highlight, but the performance of Canzon Sonar Duodecimi Toni (for 7 trumpets, 3 trombones, and 2 bass trombones), conducted by Michael Mulcahy, is brilliant. And Canzon per Sonar No. 2, conducted by James Sommerville and featuring sections from the orchestras of Chicago, Cleveland, and Philadelphia, sounds magnificent — the perfect tribute to the 1968 recordings that inspired the album. 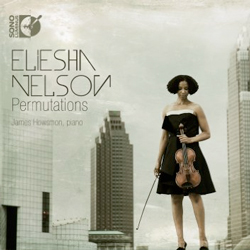 The CD opens with Nikolai Kapustin’s engaging Sonata for Viola and Piano, Op. 69, which combines elements of jazz popular during the 1940s and 50s with the composer’s Russian roots. Nelson tosses off the light Allegro with admirable dexterity. Performing with a keen sense of rhythm, she and Howsmon capture the jocular atmosphere of the tuneful movement. In contrast, Nelson performs the pleasantly lazy second movement with relaxed vibrato, emphasizing its languid melodic aspects. Howsmon opens the final Vivace with a fiery rhythmic groove that Nelson reciprocates in a gorgeous whirl of sequential tunes.

Based on 12-tone technique, Ross Lee Finney’s Second Sonata for Viola and Piano capitalizes on the viola’s expansive range. The highlight of the album, Nelson and Howsmon perform the surprisingly melodic sonata with a tender poignancy. The players are in complete synchronicity during the first movement. A sarcastic waltz in the middle of the second movement and the relentlessly aggressive piano triplets that open the finale are particularly striking.

George Walker’s Sonata for Viola and Piano juxtaposes long, held tones in the viola with sharp punctuation in the piano in the opening movement. The players commit wonderfully to these gestures, creating two distinct characters within the music. They bring a poetic grace to the rabbit trail of melodic fragments of the second movement.  Nelson’s sound is as plaintive as the human voice.

The opening Sarabande of Grammy Award-winning composer and conductor John McLaughlin Williams’s Two Pieces for Solo Viola  allowed Nelson to express herself in a carefree manner, drawing out each moment of dissonance to its fullest impact. A dizzying whirl of virtuosic scales opens the Toccata, which Nelson plays with spirit and captivating pugnacity.

Jeffrey Mumford’s Wending evokes a small microcosm of expression. Mumford writes in his composer statement that “Wending is a musical portrait and celebration of the phenomenal and visionary talents of violist Wendy Richman. Much of the basic harmonic material is based on the letters of her name (wEnDy riCHmAn). Nelson plays the unmetered phrases with carefully structured nuance, each note of Wending — and the album as a whole — is capably crafted to sound exactly as she intended. — Jeremy Reynolds 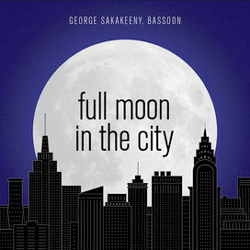 Whether you’re a connoisseur of the bassoon or simply bassoon-curious, this album is a must-have. George Sakakeeny’s beautiful performances dispel any notion that the instrument is the clown of the orchestra. All four concertos spotlight the lyricism the instrument is capable of producing.

The three movements of Augusta Read Thomas’s Bassoon Concertino (2014), inspired by paintings by Paul Klee, Wassily Kandinsky, and Joan Miró, are a romp through an eclectic garden of musical styles. Sakakeeny and the Oberlin Contemporary Music Ensemble, conducted by Timothy Weiss, are well-matched partners throughout.

Russell Platt’s charming Concerto for Bassoon and Strings (2008) receives a top-notch performance from Sakakeeny and the Oberlin Sinfonietta, also led by Weiss. The third movement, ‘Still slow — Cadenza — Fast,’ gives the performers the opportunity to show off their technical wizardry, which they do with aplomb.

As one might expect, Peter Schickele’s Concerto for Bassoon and Orchestra (1998) explores a variety of musical styles in its five movements, and has plenty of tasteful humor to boot. The soloist and the Oberlin Orchestra, under the direction of Raphael Jiménez, toss off its numerous technical demands with flair, especially during the ‘Scherzo’ and the concluding ‘Romp.’

The highlight is Libby Larsen’s inspired full moon in the city (2013). The composer imagines “a bassoon after hours, walking in the club district of an unnamed city.” The outer movements, ‘… at 3 am’ and ‘…5 am,’ serve as fashionable bookends to ‘Juking the Moon.’ Complete with a swaggering bass line and musical references to moon songs — including Van Morrison’s Moondance and Henry Mancini’s Moon River — the movement does bring to mind walking through a city after most of the clubs have closed, but you’re not quite ready for the evening to end. Sakakeeny and the Oberlin CME conducted by Timothy Weiss sound terrific from start to finish. — Mike Telin 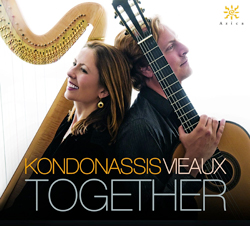 On their debut recording, Together, celebrated harpist Yolanda Kondonassis and Grammy Award-winning guitarist Jason Vieaux take listeners on a beautiful sonic journey that mesmerizes from the first note to the last. Recorded at the Oberlin Conservatory of Music’s Clonick Hall, Together was released earlier this year on the Azica Records label, produced by Alan Bise with recording engineering by Bruce Egre.

In their liner notes, Kondonassis and Vieaux write, “We named this disc Together because the harp and the guitar share so many musical, physical, logistical and acoustical similarities. There are times when our sounds are so interwoven that it’s difficult to tell which of us is playing. That kind of collaborative fusion is incredibly rewarding — not to mention just plain fun.”

It is precisely those similarities that initially made me skeptical that two plucked instruments would be able to provide enough variety of sounds to hold your attention for 70 minutes. I never should have doubted the astute musical sensibilities of Kondonassis and Vieaux. With compositions by Máximo Diego Pujol, Alan Hovhaness and Xavier Montsalvatge, as well as commissioned works by Gary Schocker and Keith Fitch, the album is a banquet of evocative musical colors, and subtle shifts in mood and musical styles. Kondonassis and Vieaux’s performances are superb, as is the sound quality of the recording. —Mike Telin (read the review here)

END_OF_DOCUMENT_TOKEN_TO_BE_REPLACED

Rodgers & Hammerstein’s Cinderella was originally produced for television in 1957 — seven years after the animated Disney film was released — and starred Julie Andrews. According to the Rodgers & Hammerstein website, it was viewed by over 100 million people. END_OF_DOCUMENT_TOKEN_TO_BE_REPLACED

The story line has its origin in an 1855 play and an 1842 farce that Thornton Wilder mined for his 1938 play The Merchant of Yonkers. When that turned out to be a flop, in 1954 Wilder made the crucial decision to re-center the show around the character of the legendary marriage broker Dolly Gallagher Levi and renamed it The Matchmaker. END_OF_DOCUMENT_TOKEN_TO_BE_REPLACED

The Dodero Center for the Performing Arts at the Gilmore Academy in Gates Mills is one feature of an impressive campus. The auditorium is shallow, the stage is deep, and the ensemble played without a shell. Throughout the program, the sound, especially in instruments’ lower registers, tended to disappear. END_OF_DOCUMENT_TOKEN_TO_BE_REPLACED