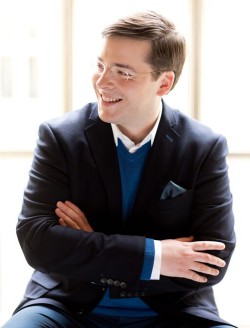 Former Cleveland Orchestra assistant conductor James Feddeck will return to perform in Cleveland this Sunday, but he’s leaving his baton at home this time. Feddeck will play a free organ recital in Gartner Auditorium at the Cleveland Museum of Art on December 6 at 2:00 pm, using one the other musical tools he honed at the Oberlin Conservatory of Music, where he simultaneously studied oboe, piano, and conducting along with organ.

“I find that conductors who spend too much time away from an instrument making music directly often become a bit strange — too much into the intellectual side rather than the practical side of things, and playing an instrument is a very practical thing,” Feddeck said in a telephone conversation. “Being a conductor is a really wonderful way to make music because your ideas aren’t limited to practical means. Still, I think it’s very important to have a direct contact with making music. I’m also an oboist and pianist, but I feel a great need to advocate for the organ.”

James Feddeck last performed on the museum’s McMyler Memorial Organ in January of 2013 at the invitation of the museum’s performing arts director, Tom Welsh. “We had a tremendous success the last time,” Feddeck said. “Various museum people came backstage to me about five minutes before the concert and said, ‘We have a big problem.’ I’m thinking, what is this big problem? Is the organ dead? Are the lights out? Well, they had run out of programs. The house was absolutely packed. It was a great afternoon celebrating music and the organ, and a great time to be an organ enthusiast.”

Welsh immediately invited Feddeck back for a second recital. This Sunday he’ll play a program he describes as eclectic. “I like to do organ programs that are a bit of a potpourri or a kaleidoscope. While I think it’s great and very interesting to play a complete cycle of someone’s works, I find that a lot of people are very curious about the organ, and you don’t really get to hear it as a solo instrument every day.

“Most people have a certain stereotype of what the organ is, whether that’s from church or wherever. It’s actually a very exciting and diverse instrument, and I like to take up the challenge of presenting as diverse a program as possible in breadth of repertoire, style, and colors. I want people to say, ‘Wow, I didn’t realize the organ could do all of that.’ It’s so important to advocate for the organ, and I even feel that as a conductor. I’m conducting several programs next year for organ and orchestra — one with Paul Jacobs in Toledo, and another program in Sweden.”

The playlist on Sunday includes J.S. Bach’s Prelude and Fugue in e, “the Wedge” (“might as well dive right in,” Feddeck said); two movements from François Couperin’s organ masses; Felix Mendelssohn’s Sonata No. 2 in c; Samuel Barber’s Variations on a Shape-Note Melody, “Wondrous Love;” Jehan Alain’s Variations on a Theme of Clément Jannequin; and Charles-Marie Widor’s Adagio and Toccata from Symphonie No. 5. 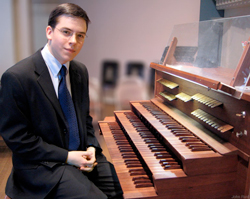 “Last time at the museum I played the first movement of Widor’s Symphony No. 6, and worked up a real sweat,” Feddeck said. “Many people came up afterwards and said, ‘That was really, really great, but do you know the Widor Toccata?’ I hope they’re going to be there on Sunday, because now they’re finally going to get the Toccata.”

After leaving his position with The Cleveland Orchestra, James Feddeck has enjoyed a full schedule guest-conducting major orchestras around the world. “I’ve had a busy fall,” he said, “conducting in Dublin, Colorado, Chicago, Grand Rapids — we did Mahler 1 — and North Carolina. Next week I go to Minnesota.” Feddeck received rave notices everywhere, but especially from the Chicago critics and members of the Chicago Symphony. “I conducted Rachmaninoff’s Second Symphony without cuts, to make the case that Rachmaninoff actually knew what he was doing. Orchestra members told me they perceived it to be even shorter than when they played the piece with the cuts. I thought that was really interesting.”

But where and when does a jet-setting conductor who wants to play an organ recital get to practice on that instrument? “I have a digital organ at home that formerly belonged to Cameron Carpenter. I hadn’t met Cameron at the time I bought it, but we have a mutual friend who keeps me informed about his activities. My friend sent me the link to an interview Cameron did in his New York apartment before he moved to Berlin, and there was this magnificent little instrument sitting in the corner. That was the kind of practice organ I’d always dreamed of.”

Feddeck arranged to purchase the organ through Carpenter’s manager (Carpenter had another house instrument on order in Europe). “It’s incredibly portable. The whole thing comes apart, and I loaded it up in New York City in the back of a minivan,” he said. “The biggest part is the pedalboard. The instrument sits on a stand that completely collapses, and it has a smaller footprint than an upright piano. I can practice at all hours of the day and night through speakers or headphones.”

The conductor-organist-oboist-pianist finds it liberating to be able to practice at home rather than having to negotiate time on a church or concert hall organ. “When you practice in public places and are trying to work things out, everybody can hear you. It’s not like being Joshua Bell who can practice his violin in the privacy of his home. This way, I can be like a normal instrumentalist!”

The cimbalom was the feature of the show, an instrument capable of taking on many personas. Its performer, Chester Englander, has shaped his career around the instrument, and has inspired composers to write more repertoire for it, some of which was presented on the program. END_OF_DOCUMENT_TOKEN_TO_BE_REPLACED

You wouldn’t expect that acoustic from a glance at the nave, which is wide and long, but not especially lofty. But when I guest conducted a local amateur choir and professional orchestra in Beethoven’s Mass in C there a few years back, during the first rehearsal we released the final chord of the “Gloria” and listened in astonishment for the next several seconds. The sound continued to roll down the space like the big wave that surfers dream about. END_OF_DOCUMENT_TOKEN_TO_BE_REPLACED