Among many fascinating aspects of the January 25 performance by the Canton Symphony Orchestra was the ensemble’s untiring attentiveness to the conductor. Here was a remarkable connectivity, a sharpened focus, a palpable state of eager readiness. The musicians were always alert, ever poised to respond instantaneously and with riveting precision to signals from the podium. Those signals were transmitted in delightfully animated fashion by assistant conductor Matthew Jenkins Jaroszewicz.

Throughout the concert, beginning with an exuberant performance of Berlioz’s Roman Carnival Overture, his lively baton technique was itself a kind of dancing at the podium. During the Berlioz, he often leaned into the orchestra with flurries of pronounced gestures and prompts, as if to further embolden the whirling woodwinds, the sprightly percussion, and the blazing brass.

The remainder of the evening featured the captivating organ soloist Heather Cooper in three late-19th century French works. The first of those was Alexandre Guilmant’s Symphony No. 1 for Organ and Orchestra. The work is a marvelous employment of the organ’s full range of colors and voicings, seamlessly integrated with the powerful sonority of strings and brass. Call it an orchestra within an orchestra. Cooper’s nuanced shaping of passages ranging from sumptuous majesty to quiet, idyllic lyricism was utterly stunning. 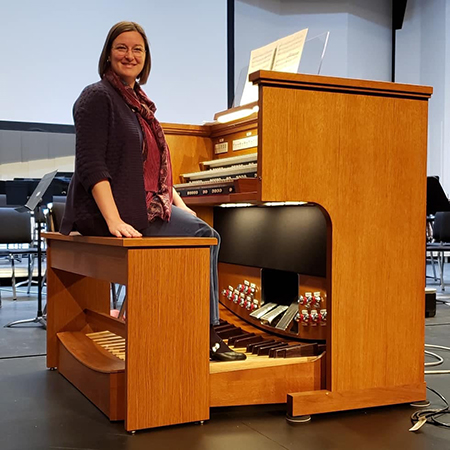 Her rendering of the grand “Toccata,” the final movement of Charles-Marie Widor’s Symphony No. 5, arranged for organ and orchestra by Richard Proulx, was equally breathtaking. Amid bright, rhythmic punctuations from the brass and timpani, Cooper’s execution of the work’s thrilling cascades of constant staccato arpeggios, balanced with rich, syncopated chords, left the audience clamoring for more. She generously obliged with a barn-burner of an encore — J.S. Bach’s Gigue Fugue. The mesmerizing spectacle of her fingers moving along the keyboard of the digital organ, her feet gliding along the pedals, conjured a giddy vision in my mind: imagine someone typing 100 words per minute while simultaneously doing a fast and intricate tap dance.

Following intermission, the full orchestra joined Cooper for a magnificent performance of Camille Saint-Saens’ Symphony No. 3 in c, “Organ.” While her artistry throughout this complex work was certainly brilliant, the organ isn’t a stand-alone virtuosic element so much as it’s on equal footing with the orchestra. Both articulate a scintillating array of colors, textures, and moods. From serene and ethereal moments to substantial summonings of remarkable orchestral power, Cooper and her ensemble partners formed an altogether electrifying union.

The exhilarating symphony ended on a note of such grandeur that when Jaroszewicz finished his podium dance and turned to face the packed house, he seemed literally aglow. His triumphal, wide-eyed smile was contagious, prompting joyous, well-deserved shouts of approval.

END_OF_DOCUMENT_TOKEN_TO_BE_REPLACED

Rodgers & Hammerstein’s Cinderella was originally produced for television in 1957 — seven years after the animated Disney film was released — and starred Julie Andrews. According to the Rodgers & Hammerstein website, it was viewed by over 100 million people. END_OF_DOCUMENT_TOKEN_TO_BE_REPLACED

The story line has its origin in an 1855 play and an 1842 farce that Thornton Wilder mined for his 1938 play The Merchant of Yonkers. When that turned out to be a flop, in 1954 Wilder made the crucial decision to re-center the show around the character of the legendary marriage broker Dolly Gallagher Levi and renamed it The Matchmaker. END_OF_DOCUMENT_TOKEN_TO_BE_REPLACED

The Dodero Center for the Performing Arts at the Gilmore Academy in Gates Mills is one feature of an impressive campus. The auditorium is shallow, the stage is deep, and the ensemble played without a shell. Throughout the program, the sound, especially in instruments’ lower registers, tended to disappear. END_OF_DOCUMENT_TOKEN_TO_BE_REPLACED