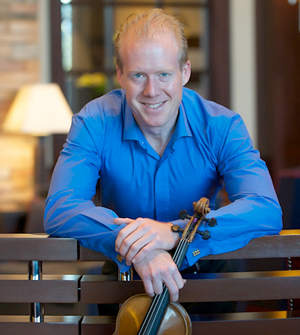 Sometime between the unfortunate episode when Jean Baptiste Lully, leading the Paris Opera orchestra by pounding on the floor with a staff, mortally wounded himself in the foot, and the time when dedicated conductors began waving pointed sticks around in front of their ensembles, concertmasters routinely led orchestras while simultaneously playing their violins.

That’s exactly the role that BlueWater Chamber Orchestra concertmaster Ken Johnston will be reviving this Saturday evening when he presides over an 8:00 pm program of music by Mozart, Dvořák, and Schoenberg at Plymouth Church in Shaker Heights.

We reached Johnston, who also serves as concertmaster of the Erie Philharmonic, to ask how he was preparing for this weekend’s assignment, and what he thought the challenges might be.

Daniel Hathaway: Conducting from the concertmaster’s position is probably a lot easier for Mozart’s Eine kleine Nachtmusic than it is for Schoenberg’s Verklärte Nacht.

Ken Johnston: Just a bit! But the best thing I can do for a group like BlueWater is to stay out of the way. If you watch great conductors, they’re not micromanagers at all. Even in a symphonic setting, a good conductor knows how to project clarity, but to follow as much as to lead. Lesser conductors say “do what I’m telling you.” That might be useful for an amateur group, but not for good professional players.

DH: Tell us about Dvořák’s Nocturne in B, which I don’t know. That’s probably a bit more complicated to lead than the Mozart.

KJ: That’s a new one for me, too. Nancy Patterson suggested it over the phone. It’s lovely, a little treasure. If I have the story correct, it’s a movement that he originally wrote for a quartet, but tossed it out, then rediscovered it and recycled it as a self-contained lullaby. It’s completely authentic and unaffected.

DH: And then we come to Schoenberg’s Verklärte Nacht, which is sometimes played as chamber music by a sextet. I assume you’re using all the strings?

KJ:  We’re using the full string section. We’ve already had one rehearsal, and tomorrow will be No. 2. It’s a doozy of a piece.

DH: What are the challenges for you in that work?

KJ: For me, everything! Parts of the score are like those little coffee table puzzles you have to untangle. And after decoding the score, I had to learn how to play it and how to lead it.

DH: I can imagine your role in rehearsing the Schoenberg will be a bit different from the Mozart, with more decisions to be made on your end.

KJ: For this piece, I’ll need to be a little less democratic and a little more heavy handed. I can usually lay back and react a little more in chamber music, but in this one there’s too much going on. I have a bit of a plan in my head for tomorrow’s rehearsal. I’ll pick specific moments and give people some ideas. Even with a conductor this piece takes some doing, and it’s the kind of work everyone should approach with a certain amount of trepidation and humility. But for me, it’s shockingly beautiful. If the history of music is like a big tree, this piece is like a branch that stands on its own.

DH: Will you be playing from the full score in the performance?

KJ: No, I’ll be playing off the first violin part. If something goes wrong, hopefully I’ll have enough of the piece in my brain that I’ll be able to handle it. Probably 25% of me will be concentrating on playing my part, and 75% of me will be trying to keep track of all the other lines. It’s like being in the middle of a football play: you just have to know who to look at at the right moment.

DH: What do you admire about the Schoenberg piece?

KJ: My favorite thing about Verklärte Nacht is that it’s through-composed and returns to the beginning, but not in the usual way. It starts with a spooky d-minor motive like a Stanley Kubrick movie — you’re not sure where it’s going to go. When it returns at the end, it’s in D major but with blue notes written in that hint of the old d-minor, but now the mood is calming rather than spooky. That’s much more complicated than just putting the piece in major at the end.

DH: Any other thoughts about this performance?

KJ: The whole idea of this concert is to make the players’ musical dialogue visible. With a conductor present, you can watch somebody conveying and translating. Without a conductor, the orchestra is is a more vulnerable place because the dialogue we have with each other is all that the audience will see and all that we have to rely on.

Jackson began the program with a recitation of Langston Hughes’ poem “Helen Keller” — the first of five poems by Hughes that served as interludes between each piece on the first half. END_OF_DOCUMENT_TOKEN_TO_BE_REPLACED

Pianos with pins and tape on strings, a bass drum and tam tam, crotales, Almglocken, and vibes. Microphones were hooked up all around the instruments. The feed was sent to speakers around the room. Lighting designer Nicholas Houfek hung incandescent globes over the arrangement of instruments from thin black wires stretching across the beams. END_OF_DOCUMENT_TOKEN_TO_BE_REPLACED

From the podium, Elim Chan set an ambitious tone for the evening. The rising star conductor, here in her Cleveland Orchestra debut, has a commanding style, and every twist and turn in Saturday’s performance tracked closely with her baton. END_OF_DOCUMENT_TOKEN_TO_BE_REPLACED