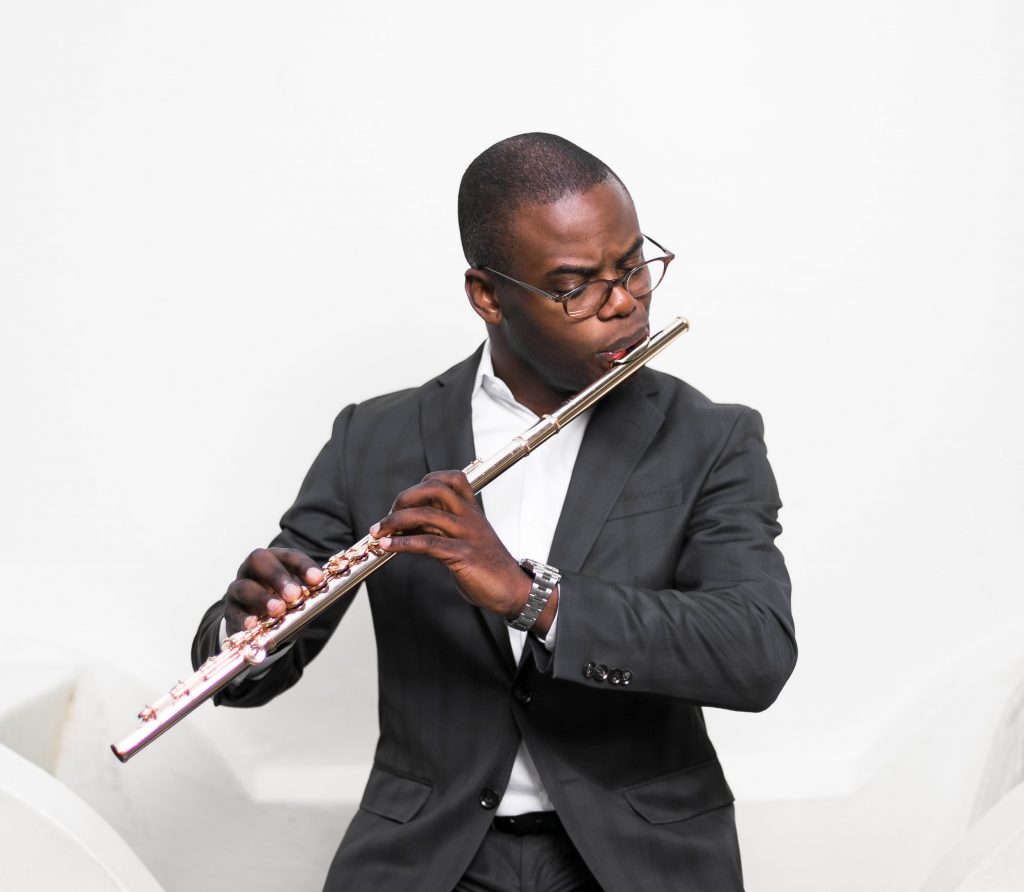 “The first thing I do is find music that I love, that I’m emotionally connected to, and that I believe the listener will enjoy,” flutist Demarre McGill said by telephone last week, explaining how he put together his upcoming program for the Kent Blossom Music Festival.

In addition to that, the identity of the composers played an important role. “You don’t need to be a female, gay, or Black musician to program female, gay, or Black composers,” he said. “This is my way of creating something that is truly representative of American classical music — this beautiful diversity. That’s intentional.”

On the topic of representation, I brought up a post that McGill shared on Facebook in March (along with a video performance of the Still), one that is best read in his own words:

When I was growing up, I thought that the classical music world looked like me. My first flute teacher was black, my band teachers were black, the kids I played chamber music with were black, I played music written by black composers, the two most influential live flute performances I heard were played by young black flutists, and the first audience I played for was an audience of black people. Although I was also fortunate to be exposed to, and inspired by, students, teachers, and performers from a variety of communities, creating a beautifully diverse musical existence, I owe my professional life to the dreams, aspirations, and confidence that came from seeing myself in the faces of people doing what I loved to do.

I was curious to hear McGill’s thoughts about seeing more of the world acknowledging the importance of representation — particularly, as he noted, since the killing of George Floyd.

“I’ve spent this past year and a half speaking a lot about things that aren’t new to me, that aren’t new to the Black community at all,” McGill said. “There are a lot of people who want to effect positive change — who want to learn — and that has been a positive. But in a certain regard, it’s been like every other year, apart from the obvious surge in people wanting to at least talk about what has existed forever in America’s history.”

Next he turned his attention to classical music. “One thing that is potentially beautiful — there is an opportunity for people within this field that I love dearly to, you could say, right certain wrongs. But actually I like to think of it as just to grow: ‘This is where we’ve been, this is where we are, and one way we can grow is by discovering, programming, and performing works that have too often been neglected.’ That’s something that, in addition to talking, is easy for me to do — programming music that I believe in, that I think is gorgeous, and that I believe should be heard.”

…this field that I love dearly… Those words/ took us into the latter part of our conversation. From hearing McGill both play and talk about music, you get a sense that his relationship to this art form is on another level from what many people have in mind when they use the word love. Has it been like that since Day One of picking up the flute?

“Actually, yes,” he said. “I’ll try to keep this simple because it’s very nuanced for me. You hear people say, ‘It’s my voice,’ and that’s true, but it’s so much more than that.”

To begin, he said that music allows even the most introverted person to share something, if the situation is right. Poetically, he described the difference between when you’re performing and you aren’t the music, versus the ideal situation, when you are the music. “Then people are able to appreciate and experience a sonic world you’re creating via the music that you’re playing. I think that’s amazing.”

One key word he used: imagination. “Every kid has an imagination, but when I was young, I was fortunate enough to connect that imagination to the music that I was either listening to or learning.”

A second one: opportunity. “For me, music has always represented opportunity — an opportunity to travel, to meet different people, to share different experiences with those people,” he said.

“And I have never taken that for granted at all. I’m just so proud to be able to do this for work — so proud that the energy that I put into this is actually how I live, how I eat. It literally has created an existence of freedom for me as a human being. So it’s multi-leveled in how it has provided my life with joy.”

END_OF_DOCUMENT_TOKEN_TO_BE_REPLACED

Supported by engagingly, yet simple staging by Cara Consilvio, a well-prepared cast of singers told the archetypal story of Cinderella with charm and flair. Framing the production was  a sparse but colorful set and wonderful lighting by Dave Brooks. END_OF_DOCUMENT_TOKEN_TO_BE_REPLACED