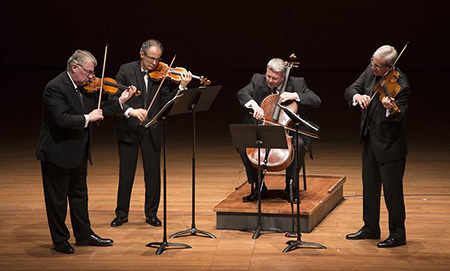 After the Emerson String Quartet’s performance with cellist Jerry Grossman at Kent State University last week, audience members exited Ludwig Recital Hall to find an extraordinary reception laid out. Food and drink of diverse tastes, textures, and temperatures lined half a dozen tables. It felt like a metaphor for the concert: so rich and extensive that to describe it is to make it sound excessive. Despite its duration and emotional range, however, the concert itself never felt overstuffed. It went down smoothly, like an expertly arranged and executed feast.

Not many concert programs position the iconic Adagio for Strings as a light starter, but for their performance on the July 18 Faculty Concert at the Kent Blossom Music Festival, the Quartet opened with this middle movement of Barber’s String Quartet. Grief made musical, the piece can lend itself to wallowing in outer sections and shrieking in the middle, but the Quartet, led by violinist Philip Setzer, converted restless motion into emotional power. Leaning into chords as each player took turns on the theme, the Quartet gave the impression of a soul in abject grief gaining strength with each new thought. Second violinist Eugene Drucker played with such a deep tone that he sounded at one point like a viola. The central climax was full but not loud, the subsequent chords autumnal rather than agonized. A long silence followed the perfectly-paced final minute, Setzer allowing each note of the last phrase to stand on its own.

Bartók’s Quartet No. 3 opens like some unspeakable creature wriggling to life. Setzer and Drucker played near the bridge to make ghostly noises, and gave accents a heavy emphasis more redolent of funk than of the quartet canon. A col legno passage in the Seconda Parte brought attention to the woody physicality of the instruments. Paving the way for the Ricapitulazione, cellist Paul Watkins bowed in broad strokes. A series of group glissandi leading into the Coda was captivating, and the final section felt like a glorious freefall.

In the first movement of Shostakovich’s Quartet No. 8, the players cleanly stated the piece’s motto –– letters from the composer’s name, translated into notes –– belying the vehemence to come. Later, Drucker and Setzer, who switched parts for this piece, gave the impression of birds rustling and vulnerable in the cold as they perch on a buzzing power line: a drone sustained by Watkins and violist Lawrence Dutton. The players saved their highest volumes for the second movement, a relentless romp in which Dutton’s sound cut through loudest and clearest. Shostakovich’s characteristic three-note barrages sounded cavernous whenever they appeared, and the final minutes of the performance answered brutality and lamenting with numb exhaustion and a heaving, sobbing cadence.

The latter half of the program consisted of the Schubert Cello Quintet, in which guest Jerry Grossman, principal cello of the Metropolitan Opera Orchestra, stood out. His sound resonated below that of the other players, making a strong case for this rare instrumentation. From its finely wrought introduction to its vortex-like final minute, the players made art of the first movement. The second came across as clear and sunny rather than celestially opaque, with the players plucking at the halfway points of their strings to yield hollow, floating sounds. Textures leaned towards the thick and rich in the third movement, its trio hitting the palate like a big slice of chocolate torte. The finale called attention to internal groupings: the violins and cellos formed teams of their own, while Dutton served as intermediary. The final downward twist of pitch proved consoling. In a concert in which the end of every movement demanded a standing ovation, this moment finally allowed for one.

END_OF_DOCUMENT_TOKEN_TO_BE_REPLACED

The strings-only work by Berg has made relatively frequent appearances on the Orchestra’s programs. In 2021, the musicians recorded it for the In Focus series, and it appeared again on last year’s European tour. Friday’s rendition maintained the group’s characteristic light and effortless playing, each section blending as much as possible to echo the work’s original form as a string quartet. At fifteen minutes total, the piece is quite short, but the dense encoded musical meanings require some extra-attentive listening. Splitting up the three movements ensured that each one could be appreciated on its own. END_OF_DOCUMENT_TOKEN_TO_BE_REPLACED