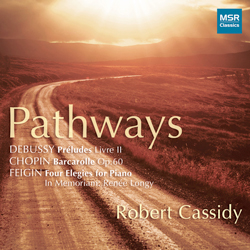 Although composer Claude Debussy rejected the term “impressionism” and referred to music writers who used the term as “fools,” today Debussy’s music is synonymous with the impressionist movement. On his self-titled CD from back in 2012, pianist Robert Cassidy captured the essence of the composer’s  music with his performances of the twelve Préludes of Book 1. On his latest recording, Pathways, Cassidy once again demonstrates his affinity for this music with discerning interpretations of the twelve preludes that comprise Debussy’s second book, as well as works by Chopin and Feigin.

From the first prelude to the last, Cassidy plays with a light touch, assured technique, and an expansive color palette. While no. 3, La Puerta del Vino (Mouvement de Habanera), is appealingly seductive, Cassidy brings a playfulness to Ondine (Water-Sprite) during No. 8. The pianist beautifully voices No. 10, Canope (Très calme et doucement triste), and the concluding Feux d’artifice (Fireworks) brings his performance to a flashy end.

Pathways opens with the enticing Barcarolle in F-Sharp, Op. 60 by Frédéric Chopin. Cassidy’s heartfelt account of the work takes listeners on a late-night ride on the Venetian canals.

Bookended by the Chopin and Debussy is Santa Barbara-based Joel Feigin’s Four Elegies for Piano: In memory of Renée Longy (1979, revised 1986). Written in honor of his ear-training teacher at Juilliard, Feigin’s piece is based on the pitches A and D, derived from his teacher’s nickname, ‘Mme. Re La.’

Feigin’s Four Elegies, all marked with slow tempos, could become monotonous in the hands of other pianists, but Cassidy’s insightful approach to the work immerses one in an imaginative tonal world. — Mike Telin 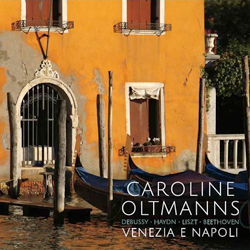 Water seems to be the connective tissue that links the works in Caroline Oltmanns’ attractive piano album Venezia e Napoli. Claude Debussy’s Images I paints the composer’s impressions of reflections in water, and Franz Liszt’s work from Années de Pèlerinage — Italie, which gives the album its title, begins with a “Gondoliera” or barcarolle. Haydn’s E-flat Sonata (Hob. XVI:49) and Beethoven’s Seven Bagatelles, Op. 33 may not add to that metaphor except in their exceptionally fluid execution by the German-born pianist, who is professor at the Dana School of Music at Youngstown State University.

Oltmanns, who recorded the album in Hamburg on a German Steinway, renders Debussy’s watercolors and textures with evocative brushstrokes, captures the spirit of a baroque sarabande in the “Hommage à Rameau,” and spins “Mouvement” out with a dizzying clarity. Her playing of Liszt’s memoirs — each movement based on a song with connections to Venice or Naples — is stylish and well-controlled. The Haydn is a model of lucidity, and Oltmanns makes a complete little picture out of each of Beethoven’s witty “trifles.”

This is a fun album of contrasting pieces that share a certain metaphysical connection. Oltmanns manages to connect with the listener via a recording as successfully as she does in her live performances. The liner notes are crisply written and the photos are lovely.  — Daniel Hathaway 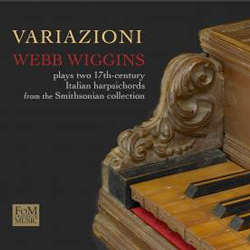 The instruments we hear are, in order of appearance, a three-register instrument (two sets of strings at unison pitch, one an octave higher) made by Nicolaus DeQuoco in Florence in 1694, and a two-register harpsichord (both sets at unison pitch) fashioned by Giovanni Battista Giusti in Rome in 1693 — two of some fifteen old Italian instruments in the collection of the Smithsonian Institution’s National Museum of American History. Housed in thin, cypress wood cases, the harpsichords were meant to be stored and carried about in sturdier, outer cases and taken out and placed on stands when they were played. Both have a colorful, fundamental sound. It’s difficult to tell them apart except when the DeQuoco’s octave register is brought into play.

Wiggins’s fluent fingerwork, sensitive touch, and expressive pacing distinguish the two toccatas and the string of variations, dances, and passacaglias. And who doesn’t love variations? Even if the tunes are unfamiliar, they stick in the ear very quickly. Informative notes by Oberlin musicology professor Steven Plank and detailed descriptions of the instruments by Smithsonian curator Kenneth Slowik provide background for those who want to delve more deeply into the repertoire and the harpsichords featured on this fine recording. — Daniel Hathaway 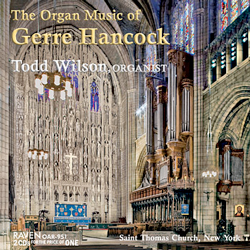 Though he grew up in a Baptist household in Lubbock, Texas, organist Gerre Hancock ended his career with a thirty-three year tenure at St. Thomas’ Church on Fifth Avenue in New York, an Anglican cathedral in everything but name. A master improviser who studied with Nadia Boulanger, Jean Langlais, and Marie-Claire Alain, Hancock was famous both for his planned improvisations and his extemporizations on submitted themes, which naturally reflected the rich harmonic palette of French composers and improvisers.

Todd Wilson, who directs the music at Trinity Cathedral in downtown Cleveland, encountered Gerre Hancock while he was studying at the Cincinnati College-Conservatory of Music and Hancock was organist and choirmaster at Christ Church Cathedral. As a memorial to his mentor, who died in 2012, Wilson spent three days at St. Thomas in August 2013 recording all of Hancock’s organ music. The result is a handsome, 2-CD set chock-full of preludes, fugues, and variations on hymn tunes, fanfares, liturgical meditations, a three-movement Holy Week Suite for two organs, and a Fancy for Two to Play (organ duets intended for Hancock and his wife Judith, here played by St. Thomas assistant and Wilson’s former CIM student Kevin Kwan).

Lovers of the French organ and English cathedral music will luxuriate in these recordings. Wilson plays Hancock’s works lovingly, fastidiously, and thrillingly, as though channeling the master himself. The extensive documentation features photos of Gerre Hancock at various stages of his life, and a history of the organs of St. Thomas Church. — Daniel Hathaway

Jackson began the program with a recitation of Langston Hughes’ poem “Helen Keller” — the first of five poems by Hughes that served as interludes between each piece on the first half. END_OF_DOCUMENT_TOKEN_TO_BE_REPLACED

Pianos with pins and tape on strings, a bass drum and tam tam, crotales, Almglocken, and vibes. Microphones were hooked up all around the instruments. The feed was sent to speakers around the room. Lighting designer Nicholas Houfek hung incandescent globes over the arrangement of instruments from thin black wires stretching across the beams. END_OF_DOCUMENT_TOKEN_TO_BE_REPLACED

From the podium, Elim Chan set an ambitious tone for the evening. The rising star conductor, here in her Cleveland Orchestra debut, has a commanding style, and every twist and turn in Saturday’s performance tracked closely with her baton. END_OF_DOCUMENT_TOKEN_TO_BE_REPLACED