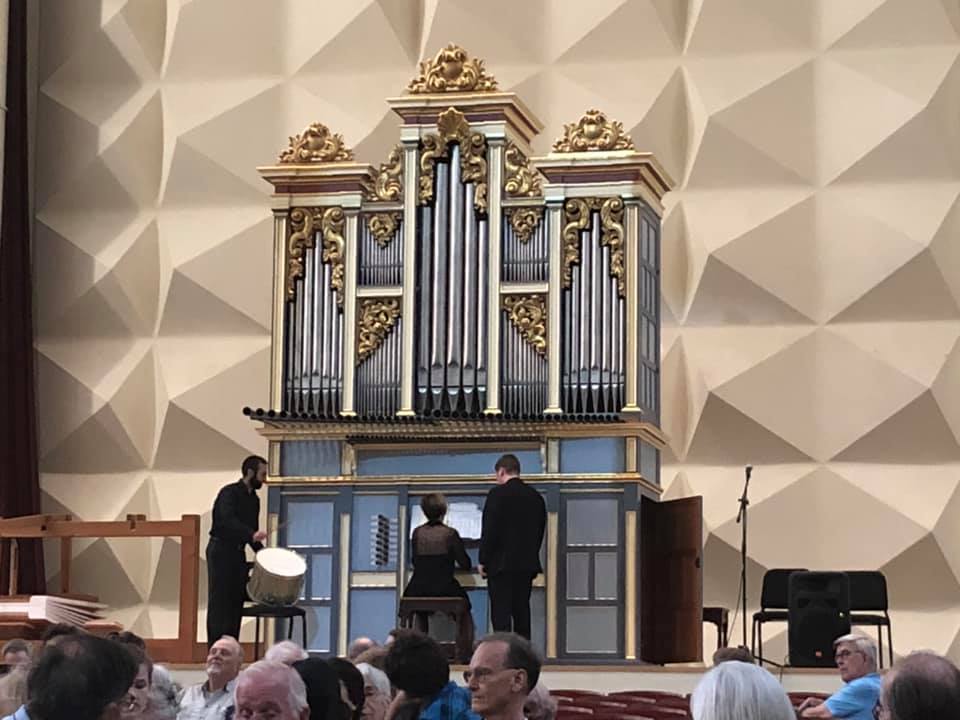 American organist Kimberly Marshall gave the first of a series of dedicatory recitals on Oberlin’s Fenner Douglass Memorial Organ on Sunday, September 22. An Oberlin alumnus, Douglass was Professor of Organ at the Conservatory from 1949 to 1974. The organ was originally built by Greg Harrold in 1989 for Pacific Lutheran Seminary in Berkeley, California. It was dismantled in 2017 and reinstalled at the rear of Warner Concert Hall in August 2018, where it sits at the opposite end of the room from its Dutch cousin, the large Flentrop organ in the front organ loft.

Although the new-to-Oberlin organ was built in the 20th century, it is modeled after organs built in Spain and Portugal from the 16th-18th centuries. Iberian organs were often small, but capable of a wide variety of timbres. During the so-called “Golden Age of Spain” in the 17th century, the Cathedral of Toledo boasted no fewer than six organs with elaborate gold decorations.

The Oberlin instrument has a single keyboard, divided in the middle. Different stops can be drawn for the treble and the bass, making it possible to play solo combinations in one hand and accompany them in the other. There is a limited pedalboard of eight keys that look like spatulas.

The organ’s sounds vary from gentle flute stops to stops sounding at higher levels of the harmonic spectrum, as well as brilliant trumpet ranks introduced to Spanish organs in the 18th century. The Harrold features both a Trompeta Real, a brilliant stop mounted vertically inside the case, as well as a Trompeteria, an array of reed stops whose pipes extend horizontally from the front of the case, useful for depicting royalty or playing battle fanfares.

There are also some specialty stops: Pájaros (“birds”) and Cascabeles (“tiny, soft bells”). The Harrold organ can be pumped by hand, but because one of the bellows sitting next to the instrument needed repairs, its electrical blower was used for this concert.

Organist and scholar Kimberly Marshall has established herself as an expert in historically informed performance, having studied with Fenner Douglass at Duke University. Her program on Sunday featured works from Spain and Portugal from the 16th, 17th, and 18th centuries, and included works of the three most famous composers of the time — Antonio de Cabezón (1510-1566), Francisco Correa de Arauxo (1583/4-1654), and Juan Cabanilles (1644-1712) — along with Pablo Bruna (1611-1679) and Portuguese organist Diego da Conceiçào (late 1600s). 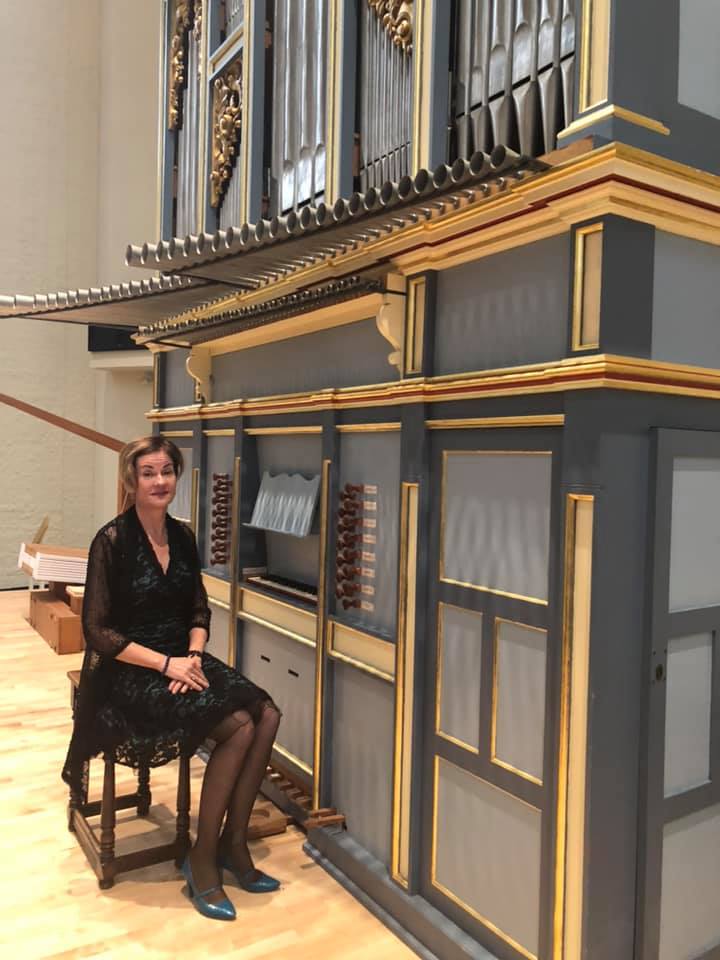 The tiento was the dominant musical form for this music. Its imitative polyphony interspersed with flights of scales was intended to demonstrate the virtuosity of the performer. Marshall played tientos by Cabezón, Correa, and Bruno, all showing similar characteristics, despite having been composed over the course of a century.

The Tiento del Séptimo Tono by Cabezón is based on a melody from the Missa de Beata Virgine by Josquin de Prés, while the Tiento XXV de Medio Registro de Tiple de Séptimo Tono by Correa is perhaps the most elaborate in its inventions. In the wrong hands, these pieces could be deadly boring, but Marshall brought them to life, demonstrating the capabilities of the instrument with varied registrations and subtle phrasing and articulation.

Juan Cabanilles’s Pasacalles de Primer Tono is a set of variations on a repeating bass line. Sophisticated in its use of harmonies, it allowed Marshall to show the color range of the organ.

Another characteristic organ form in Iberia was the Batalha, or “battle music.” The Batalha de 5o Tono by Diego de Conceiçào showed off the trumpets, including a softer reed stop that Marshall used for echo effects. The battle pieces depict fanfares and marching troops that advance and retreat, as well as pastoral scenes following the battle.

Kimberly Marshall was an ideal interpreter of this repertoire on Sunday — scholarly, yet bringing both style and a sense of adventure to the music. As an encore she played a rousing fandango, a typical Spanish dance that hinted at the country’s Islamic heritage.

Oberlin has planned a series of dedicatory recitals during the course of this academic year. Recitalists include Robert Bates (October 24 at 7:30 pm), Jonathan Moyer (November 24 at 4:30 pm), and Guy Bovet (February 29 at 7:30 pm).

Although the turbulent marriage of F. Scott and Zelda Fitzgerald —  self-caricatures of the Jazz Age — has inspired a number of literary efforts in addition to their own near-autobiographical novels, the subject never seems to have been approached through the lens of opera. Composer Evan Mack and librettist Joshua McGuire have stepped in to fill that void with their one-act The Ghosts of Gatsby, commissioned by Samford University (Montgomery, Alabama), where it premiered in November 2018. END_OF_DOCUMENT_TOKEN_TO_BE_REPLACED

While many American orchestras were just beginning to stir again after the holidays, Franz Welser-Möst and the Clevelanders were busy pulling off one of the most impressive programs in recent memory. A neglected Dvořák symphony, a darkish Mozart piano concerto featuring Yefim Bronfman, and a standout among Janáček’s few orchestral works served up sequential delights on Friday, January 10. END_OF_DOCUMENT_TOKEN_TO_BE_REPLACED