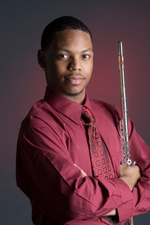 It’s rare to hear an entire concert of solo flute, but that was the case on Monday night, April 27 on the Lorain County Community College’s Signature Series in the Studio Theater of the Stocker Arts Center in Elyria. One lone treble voice without harmonic accompaniment can lack depth and variety, yet flutist Brandon George performed a multi-faceted program of Baroque and modern works, imbuing them with a fascinating spectrum of sounds.

The evening opened and closed with works by J.S. Bach. Originally for solo violin, the Largo from Sonata in C Major, BWV 1005, was a lovely choice to begin this adventuresome program. George gave it a stately, calm reading.

“Canzona di ringraziamento” from L’opera per flauto by Salvatore Sciarrino is a fluttering, ethereal piece largely consisting of timbral trills, quarter tones and harmonics. It was clear that George is completely comfortable performing extended techniques, although he played the piece somewhat pedantically. It seemed cautious, with underplayed crescendos and an overly regular rhythm to its trills and tremolos.

The next work, Felix Renggli’s interweaving of Pierre Boulez’s “Transitoire V” from …explosante-fixe… into Marin Marais’ Les folies d’Espagne, was a brilliant juxtaposition of the Baroque and modern. The Marais, originally written for viol, has been transcribed for numerous instruments and has become a staple of the solo flute literature. The Boulez, initially written in memoriam of Igor Stravinsky, exists in several different instrumental versions, including flute with chamber orchestra and flute with electronics. A skillful, adroit flutist, George convinced us of the rightness in the pairing of these two pieces, yet he performed them with a serene sameness. It would have been a stronger reading had there been more variation in dynamics, color and character.

In his program notes, George shared with us his concept for the evening: he wanted to explore poet André Breton’s description of beauty and surrealism, which inspired Boulez to compose …explosante-fixe… “Compulsive beauty will be veiled-erotic, fixed-explosive, magic-circumstantial, or will not be,” wrote Breton.

It’s unusual to attend a concert where the performer doesn’t speak to the audience. George’s biography noted that he has produced and hosted programs for New York Public Radio, which made it all the more surprising not to hear him expand on the printed notes we were given. His silence created an interesting austerity that pointed all of our listening to the sounds being created.

The first half of the program ended with a piece for solo piccolo, Nidi by Franco Donatoni. George’s light and facile playing was a terrific match for this delicate and demanding work.

George played the opening of the second half offstage, per the instructions of composer Oliver Knussen. His Masks, Op. 3 for flute and glass chimes is a staged work, and the flutist showed dramatic postures when he finally came onstage. Making sweeping gestures while playing, he occasionally turned his back to the audience, appearing to be engaged in a conversation with people only he could see. An offstage glass chime periodically trilled notes throughout the work.

Throughout the concert George tended to underplay the dramatic qualities of the music, perhaps saving intensity for the final piece on the program. In Bach’s Toccata and Fugue in D minor BWV 565, arranged by Salvatore Sciarrino, he radiated an amazing energy. He played this illustrious work from the organ repertory with such ferocity that the audience could easily forget that we were hearing only one of the multiple lines that Bach originally wrote.

Published on ClevelandClassical.com May 5, 2015.

The history of classical music sometimes borders on mythology. The music on the Akron Symphony’s Saturday, February 22 program has taken on this fabled, quasi-historical quality — Mozart’s Requiem, Schubert’s “Unfinished” Symphony, and Beethoven’s over-finished Leonore Overture No. 3. Fortunately, in performance the music more than lived up to the story. END_OF_DOCUMENT_TOKEN_TO_BE_REPLACED

Cleveland’s Baroque Orchestra celebrated the Valentine’s Day weekend with four performances of “L’Amore: An Old Italian Valentine.” I heard the second concert on the evening of Valentine’s Day itself at St. Paul’s Episcopal Church in Cleveland Heights. Apollo’s Fire conductor and harpsichordist Jeannette Sorrell greeted the audience with the adage, “Italian is the language of music, of the angels, and of love.” END_OF_DOCUMENT_TOKEN_TO_BE_REPLACED

Every so often, the first seconds of a concert bring neither anxiety over how the rest will go nor twitchy overstimulation, neither boredom nor ecstasy, but a satisfying assurance. Some performances click right away, the musicians’ technique unimpeachable, their artistry and expression powerful, their manner warm but professional. Such concerts hold attention in a special way — the chances of a misstep negligible enough that listening never involves comparison to an abstract standard. In the Phaeton Trio’s recent tour de force in Rocky River, the initial gestures of the performance set a high standard that held throughout. END_OF_DOCUMENT_TOKEN_TO_BE_REPLACED

Musicians love a good metaphor: take, for instance, that of summiting a mountain. When a violinist speaks this way after playing all of Bach’s partitas, or a soprano recalls preparations for a Wagner opera, the image of the artist mounting some hostile peak offers implications of persistence, struggle, and of course triumph. Pianists might describe Beethoven’s sonatas this way. But how many have actually played at the top of a mountain? Archival video confirms that French pianist Pierre Réach literalized this image of the soloist at the summit over twenty years ago. A recent concert in Cleveland confirmed that the figurative Everest of Beethoven’s piano music still bears his banner as well. END_OF_DOCUMENT_TOKEN_TO_BE_REPLACED

The Cleveland Orchestra — or at least half of it — marked Valentine’s Day with a straight-through, 50-minute concert led by Belgian early music guru Philippe Herreweghe. The February 14 performance, marketed as a romantic evening of orchestral classics, played to a packed house (marketing works!). END_OF_DOCUMENT_TOKEN_TO_BE_REPLACED