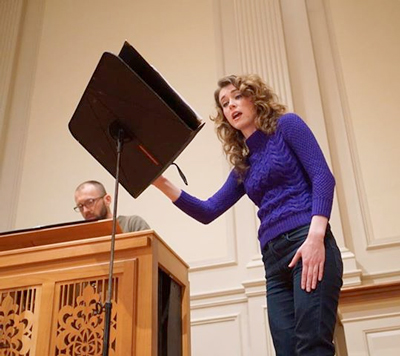 Now that the sun is finally beginning to melt some of Cleveland’s snow piles, the Cleveland-based band Les Délices reminds us of the wintry darkness from which we earnestly hope soon to emerge. In a departure from their usual repertoire — the secular music of the French baroque — the group served up a rich and satisfying feast of Lenten fare, a concert of sacred music for the Christian season of penitence and reflection. (This concert repeats on Saturday, March 7, at St. Peter’s Church, Cleveland (7:30 pm) and Sunday, March 8, at Plymouth Church UCC, Shaker Heights (4:00 pm).

Presented without intermission — and, breaking with their usual style, without spoken commentary — the program took us into the kind of music that apparently packed the fashionable churches of Paris during the Lents of the late 17th and early 18th centuries, replacing the grand masses and cantatas of the rest of the church year with sparser forces. Indeed, they featured not professional singers but nuns (who must have been well trained!).

The favorite text of the season was drawn from Jeremiah, the gloomiest of the Old Testament prophets, who wrote extended lamentations for the fall of Jerusalem (“How lonely sits the city that was full of people!”). In later Christian contexts, Jeremiah’s poetic expressions of sorrow became linked with Christ’s agony — in the wilderness, in Gethsemane, and on the cross — and with the Counter-Reformation’s campaign to use emotionality and beauty to urge the faithful to repent their sins and to resist the temptations of Lutheran Protestantism.

Jeremiah’s “Lamentations of Jerusalem” had been staples for sixteenth-century composers writing in the polyphonic style (Palestrina, for example). By the end of the seventeenth century, these dark texts took on new life as highly “modern,” richly expressive, and deeply unsettling performances of public grief.

Les Délices anchored the program with two major settings of the lamentations, one by François Couperin (d. 1733) and the other by Marc-Antoine Charpentier (d. 1704). Both featured a single voice, in this case the young Australian soprano Nola Richardson, who sang the French-inflected Latin with brilliant diction, tonal clarity, and impeccable phrasing.

The pieces are characterized by long melismas (a single vowel sustained over many notes — sometimes dozens!). Unlike more familiar baroque vocal lines, with fairly predictable landing places (think Handel’s Messiah), this music is in constant motion, with unexpected and sometimes radical shifts in the harmony and a recurrent deferral of cadence. Richardson’s command of these delicious twists and turns — evidently designed as an instrument of penitential disorientation for the listener — made them seem fascinatingly uncertain and at the same time, completely secure.

At moments, amid the shadows of Oberlin’s austere Fairchild Chapel, the music took me into something akin to what these Parisian Lenten services must have intended: a gradual suspension of daily life and a willing acceptance of the complicated processes of repentance.

A continuo section comprised of viola da gamba (Beiliang Zhu) and continuo organ (Michael Sponseller) expertly and movingly enriched the nuanced peregrinations of the soprano line. Between verses in the Charpentier, instrumental ritornelli (short, repeated, and more dance-like interludes) provided short breaks from the intensity of the lamentations, featuring Debra Nagy and Kathie Stewart on recorders, alternating with Cynthia Black on baroque viola. 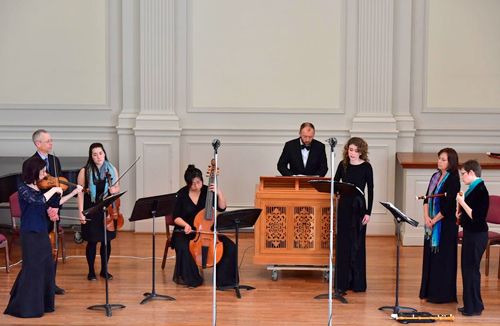 A Charpentier anthem on the familiar text O vos omnes (“All you who walk by, see if there be any sorrow like my sorrow”) allowed Richardson — beautifully accompanied by Stewart on baroque flute and Nagy on recorder — to exploit the rhetorical intensity of the text. Here, as in most of the concert, Les Délices used the low registers of the instruments with great effect, to emphasize the Lenten tones of sadness.

Among this wealth of church music, a daring inclusion of a secular piece — the famous “tombeau” written by the viola da gamba player Marin Marais in memory of his teacher Sainte-Colombe (the subject of the film Tous les Matins du Monde) — provided emotional intensity outside of the specifically religious. Beiliang Zhu and Michael Sponseller (on harpsichord) played it with high drama, punctuating it with sudden bursts of expressive anguish.

Lest we forget that this penitential music was nonetheless written for the Paris of the Sun King, the program included music more typical of Les Délices’ usual exploration of dance and courtly styles. The concert opened with a “simphonie” of Charpentier, beginning with a typical French overture, and similar orchestral numbers were scattered through the program. With the addition of two violins (Scott Metcalfe and Julie Andrijeski) to the other forces, the sound was more typically “French baroque.” Even here, though, the penitential kept reappearing as dance forms gave way to episodes of plainchant and contemplative counterpoint.

With this adventuresome programming, presented both with conviction and mastery, Les Délices takes on a new and highly promising direction. I look forward to other such musical adventures with the group.

The cimbalom was the feature of the show, an instrument capable of taking on many personas. Its performer, Chester Englander, has shaped his career around the instrument, and has inspired composers to write more repertoire for it, some of which was presented on the program. END_OF_DOCUMENT_TOKEN_TO_BE_REPLACED

You wouldn’t expect that acoustic from a glance at the nave, which is wide and long, but not especially lofty. But when I guest conducted a local amateur choir and professional orchestra in Beethoven’s Mass in C there a few years back, during the first rehearsal we released the final chord of the “Gloria” and listened in astonishment for the next several seconds. The sound continued to roll down the space like the big wave that surfers dream about. END_OF_DOCUMENT_TOKEN_TO_BE_REPLACED