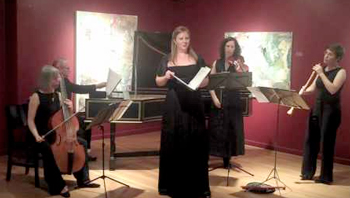 Whether it’s Pyramus and Thisbe in Ovid’s Metamorphoses, the Greek myth of Hero and Leander, or William Shakespeare’s Romeo and Juliet, the quest for true love often ends in tragedy. This weekend Les Délices will bring the timeless tails of star-crossed lovers to life with a program titled “Fated Lovers.”

Performances will be held on Saturday, April 8 at 8:00 pm in the Galleries at Cleveland State University, and on Sunday, April 9 at 4:00 pm in Plymouth Church. The concerts will feature works by Rebel, Clérambault, Senaillé, and Rameau.

“What I always find challenging with these types of settings is the question of whether it is the original version of the myth or a poet’s take on it,” soprano Clara Rottsolk said during a telephone conversation from New York, where she was performing with the early music ensemble Artek.

Rottsolk said that she usually begins learning a new cantata or opera by examining the themes in the libretto. “The characters are fleshed out by the librettist a little more than they are in mythology, and composers do tell you a lot about the pith that they were going for.”

Rottsolk will be joined by tenor Jason McStoots for Saturday’s and Sunday’s concerts. “I’m not sure about Jason’s solos, but at least mine have happy endings,” the Seattle native said. “It is very clear that the suffering, the love, and the fidelity that the two characters have for each other is rewarded. And I think it is that very human experience that the composers are exploring in this music.”

Rottsolk noted that these stories about classical characters and the powers that attempt to pull their love apart are timeless. “I guess the modern version of that theme is Buffy the Vampire Slayer, where all of the teen angst becomes manifested in real monsters. In the case of the songs this weekend, the love angst is manifested in storms — because some god was angry about something.” 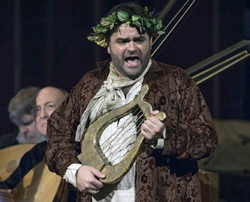 Although Rameau’s opera is new to Rottsolk, she said that when she began to study the piece, she thought, “‘Wow, this is totally blowing my mind.’ It’s so hyper-expressive, and particularly for French opera, it is very compact — we don’t spend 45 minutes beating our breasts about something. I think it’s exciting, beautiful, and very well-paced.”

And speaking of pacing yourself, in addition to a busy performance schedule, Clara Rottsolk, who is now based in Philadelphia, also teaches voice at Swarthmore, Haverford, and Bryn Mawr Colleges. What does she gain from the experience of working with young voices? “There are a couple of important things,” she said. “It keeps me honest, and keeps me thinking about the components that go into everything from the most basic to the most intricate. It’s very inspiring to watch the students make discoveries and add their own takes on them — you realize that there are still other perspectives to be entertained.”

Rottsolk also enjoys working with liberal arts students, who are studying other academic subjects. “There is an interdisciplinary source of inspiration that I find very satisfying. The students are bright, curious, and they sing simply because they want to, so their motivation to study singing is very pure and I enjoy it very much. I’m pretty-darn lucky.”

END_OF_DOCUMENT_TOKEN_TO_BE_REPLACED

Tower dedicated this surprisingly brief work to “women who take risks and are adventurous.” Adventurous to be sure. While the opening theme is a subtle echo of Copland’s, the CSO brass was remarkably bright, crisp and crackling in its relentless morphing of the motif into quick, layered variations, both delicate and discordant, robustly spiced with startling bursts of timpani. END_OF_DOCUMENT_TOKEN_TO_BE_REPLACED