After considering all its options, Cleveland’s period ensemble Les Délices decided to fully embrace the idea of creating pre-recorded “shows” in the place of live, in-person performances this season. There will be two cycles, of which the first, SalonEra, debuted online on Monday evening, August 24 with an episode dedicated to music by Johann Sebastian Bach. More programs will follow every two weeks and be available for viewing for 24 hours.

Those who have become familiar with Zoom video conferencing in the last six months would have recognized a few similarities in last night’s SalonEra: except for two musicians who played in the same room, performers collaborated electronically, and the one-hour presentation offered viewers the opportunity to comment and ask questions via live chat. 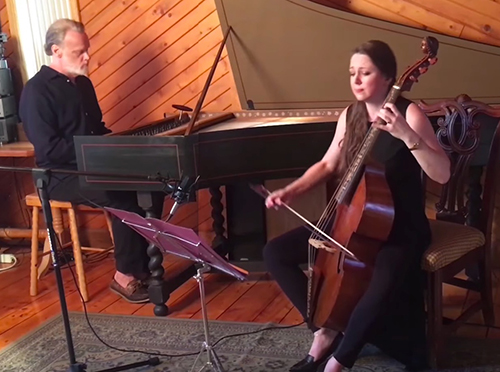 The musical menu began and ended with elegant, slow pieces: the Adagio from the E-Major Flute Sonata (with Nagy on the solo line), and the middle movement of the c-minor Concerto for Oboe and Violin. At the center of the program came the cheerful oboe obbligato aria “Sich üben im Lieben” from the Wedding Cantata BWV 202. The rest of the playlist included an aria from Cantata 84, two movements from the D-Major Gamba Sonata, and the vivacious “Tempo di Borea” and Double from the b-minor Solo Violin Partita.

With performers of this caliber, it goes without saying that the singing and playing were superb. Happily, video and audio production values were high — both engineered by Eric Milnes. Except for the inevitable few moments of buffering (an internet thing) and some variable sound levels, nothing went awry technically.

A live Q&A followed the performance, where we learned some interesting things. Ex-Clevelander Ross W. Duffin, who suggested the name Apollo’s Fire for our other local period instrument ensemble, also came up with “SalonEra” for Les Délices. Eric Milnes had indeed memorized the continuo parts and played some of them on an ersatz portative organ — a cabinet that concealed an electronic keyboard powered by Hauptwerk samples. Finally, Debra Nagy reminded the audience of her stylistic flexibility by playing her jazzy version of Autumn Leaves over the closing credits.

The next edition of SalonEra is scheduled to stream on Monday, September 7 at 7:30 pm, when Aisslinn Nosky, violin, Thomas Carroll, clarinet, Allison Monroe, violin, and Yvonne Smith, viola, will get together for music written to be enjoyed in one’s living room among friends — works by Druschetzky, Haydn, Weber, and Chevalier de Saint-Georges.