One of the initial inspirations for this crossover program was expanding the instrumental repertoire by borrowing from vocal music. I reached Nagy by telephone last week and began by asking about the decision to add a singer.

DN: If I’m honest, the decision was about what’s the next stage for this project. Either it was bringing in an upright jazz bass player or a singer, and we went in this direction. It’s always interesting to think about who you want to work with, and why, and what they bring to the project. And in this case, the question was, am I going to bring a jazz singer in, and ask them to sing 17th-century music as well? In my experience, that isn’t terribly successful.

So I decided to go with Hélène Brunet [pictured below], who is mainly a classical singer but also sort of a pop singer at heart. She’s a lot of fun and has a really wonderful stage presence, and she’s a really close colleague of our collaborators Mélisande and Eric.

The project originated as a way to explore some of this vocal music on instruments and expand the repertoire, but I think it’s also very collaborative music that gains a tremendous amount of energy from the players and their chemistry. And there’s a degree to which this particular lineup both expands and keeps things in the family in a lovely way. 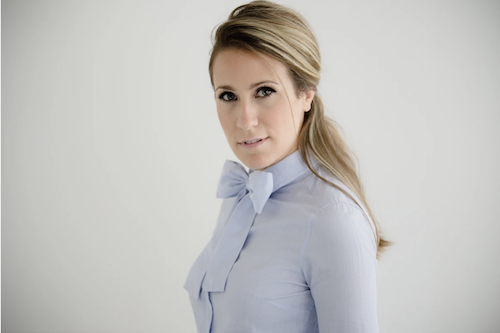 JH: The first concert of this program was in 2016, and I was just reading a review from then — you sang an encore of Autumn Leaves! Was it ever on the table for you to do more singing for this program?

DN: Well, I joke a little bit — I always think that in my next life, I’d love to be a jazz singer, which is kind of true. It was a little bit of a fantasy for me to sing the encore, and there are plenty of programs in which I do sing and play, usually Medieval music. You know, I love to sing, but I also recognize there are a lot of people who do that all the time and really well. It’s interesting for me — maybe that’s something that will happen in future versions of this, because certainly it’s a lot of fun, and the audience loves to hear that I can make this other noise.

I remember right after we created “Songs Without Words” and I sang the encore, my partner and I were traveling in New Orleans. We heard a lot of music, and I just loved that all the band leaders sang. It didn’t matter if they played saxophone or trumpet or whatever, and it wasn’t about the quality of the voice — it was about the communication.  And I thought, I could emulate this quality of fearlessness, because there is something really wonderful and genuine about it.

But I will admit, it’s hard to wear a lot of hats. People say, ‘You do so many things,’ and I say, ‘Yes, but not all at the same time.’ And I have to tell you how nerve-racking it is even to do the instrumental version of the program, and then sing. Your voice isn’t warmed up, and you have no idea what sound or pitch is going to come out of your mouth. Everybody loves it, and at that point in the program, they’re completely forgiving — you have them in the palm of your hand, and that’s sort of the optimal situation. So I’m glad I make it look easy, but everything is really challenging.

JH: That’s so interesting what you heard in New Orleans — I’m really curious about what that would be like in the classical world. But let’s talk about one other aspect of these concerts: this arc of an affair that organizes the program.

DN: Well, it’s really hard for me to just say, ‘We’re going to do a program that is a laundry list of songs.’ I need more rationale. I need some kind of structure to — I don’t want to say justify the order, but it helps. And I think any great programmer is also really concerned about the arc of the program — where you start, where the emotional highs are, where you let the air out of the bubble, and how you leave people at the end of the night.

Last year we did a Medieval program with the Newberry Consort based on the Leuven Songbook. It could have just been a laundry list of songs, but we created a narrative loosely inspired by the Roman de la Rose. That gave us a rationale for the projections that we used, and also helped bring meaning to something that may have been conceptually foreign or unusual. It gives a little structure for the listener, especially when they might otherwise feel disoriented.

JH: Part of your program notes is about matching a voice with an instrument. One thing that gives you some flexibility, you write, is that the Baroque oboe has fewer keys. But have you found that any particular voice types translate better to instruments than others?

DN: As a Baroque oboist, I work with a lot of singers — I play a lot of obbligato arias by Bach and other people. I also feel like I get singing a little bit, and I get singers, and I really love the sounds of language. So for me, playing with singers and text is something that I’m just really interested in, and aspire to do, and enjoy.

I’ve heard plenty of comments like, ‘Wow, the oboe and the voice sounded like a single instrument!’ Some of that’s the instrument, and some of that’s the approach, I’m sure. I wouldn’t say there have been singers that I just couldn’t match, but there are definitely — for all of us — voices that we like and connect with more than others. A really astringent tenor with a fast vibrato doesn’t get me excited (laughs) but it doesn’t mean that I can’t play a compelling aria with them.

You can read about Les Délices’ “Songs Without Words” project in our 2016 preview conversation with Nagy, our review of that concert, and our CD review.

The cimbalom was the feature of the show, an instrument capable of taking on many personas. Its performer, Chester Englander, has shaped his career around the instrument, and has inspired composers to write more repertoire for it, some of which was presented on the program. END_OF_DOCUMENT_TOKEN_TO_BE_REPLACED

You wouldn’t expect that acoustic from a glance at the nave, which is wide and long, but not especially lofty. But when I guest conducted a local amateur choir and professional orchestra in Beethoven’s Mass in C there a few years back, during the first rehearsal we released the final chord of the “Gloria” and listened in astonishment for the next several seconds. The sound continued to roll down the space like the big wave that surfers dream about. END_OF_DOCUMENT_TOKEN_TO_BE_REPLACED