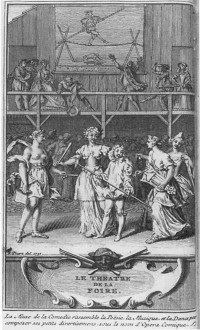 When we hear the big names of French Baroque music — Couperin, Lully, Rameau — we think of the opulence of the courts of Paris and Versailles. And we think big — long, serious operas on mythical subjects, string bands packed with dozens of players, and hefty subsidies from king and courtiers. But outside the heady claustrophobia of the courts, Paris also had a looser musical counterculture in the suburbs: small ensembles that played music based on popular tunes, and presented “operas” based not on the tragedies of gods and heroes but on the complications of everyday life. This music, called in French “voix de ville” (urban voices), was lively, irreverent, and bawdy, so much so that it’s from that French phrase that we get our word “vaudeville.”

Les Délices, Cleveland’s sparkling French Baroque ensemble, based its final program of the season, “Concertos Comique,” on these musical evasions of courtly cultural dominance. I heard the program Sunday afternoon in Plymouth UCC Church’s sunny Herr Chapel. (The night before, the program had been performed at the Music Settlement’s West Side venue, the Bop Stop.)

One of the many delights of Les Délices is that the music it plays, though chronologically old, always feels new. These are pieces — and often composers — that we haven’t heard before, thanks to music director Debra Nagy’s unflagging curiosity about the hidden gems of the past.

Four of the seven pieces on this program were composed by the long-lived and little-known Michel Corrette (1707-95), who directed two of the so-called “Fair Theaters” outside Paris. Corrette used well-known tunes of the day (we’re talking “Happy Birthday” or “Yesterday” in contemporary terms) as the material for small ensemble pieces called “comic concertos” for three treble voices and continuo. Based on simple tunes, the concertos are also occasions for dazzling solo work from all the performers.

While Corrette’s scores indicate that the upper voices in these concertos could be performed on flute or violin, baroque composers were loose in their instrumentation. Here the ensemble consisted of an oboe (Nagy), two violins (Julie Andrijeski and Scott Metcalfe), and a continuo part played with admirable presence by Josh Lee on gamba and Simon Martyn-Ellis on theorbo and guitar.

Three of Corrette’s concertos served as beginning, middle, and end to the program. Somewhat formulaic in structure, they are also varied and engaging. Playful in style and full of opportunities to show off, they tend to favor the energetic over the contemplative. 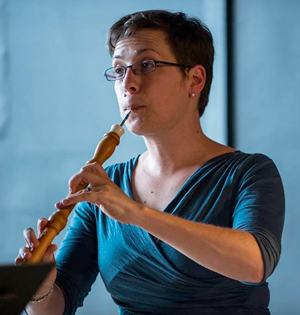 In the first concerto, subtitled “Le Mirliton,” Nagy spun long and liquid lines even when negotiating sequences of dauntingly fast notes. (A mirliton is a French version of the kazoo, but that instrument mercifully made no appearance.)

The second of the Corrette concertos (called “La Plaisir des Dames”) was dominated by the feel of a peasant clog-dance. Scott Metcalfe handled the whirling fiddle-type passagework with aplomb.

The program finale, a third Corrette concerto based on the famous Rameau piece “Les Sauvages,” gave Julie Andrijeski a chance for some fine virtuosic solo work. The slow middle movement for oboe and plucked string accompaniment was a lovely sunlit contrast to the appropriately “savage” wildness of the fast movements.

A fourth piece by Corrette was a sonata from his Délices de la Solitude, featuring virtuoso playing by Josh Lee on the viola da gamba, accompanied by Martyn-Ellis on theorbo. In the slow movement, a haunting minor-key aria is followed by an aria in a livelier mood, capped by a reprise of the first tune. Lee’s handling of the transition back to the minor mode exquisitely evoked the “solitude” that Corrette may have had in mind in writing for the gamba, that introspective favorite of French Baroque composers (think Tous les Matins du Monde).

Simon Martyn-Ellis took up the baroque guitar for a solo performance of Francesco Corbetta’s version of the popular “Folies d’Espagne” (the energetic dance tune that swept baroque Europe, more generally known by its Italian name, “La Follia”). It featured an intricate combination of strumming and plucking.

The closest we got to opera in this program was a suite from the 1714 opera Ragonde, by Jean-Joseph Mouret. Nagy gave a verbal outline of the complicated circles of sex and trickery that constituted the wildly improbable, hilarious plot. The suite itself is full of dramatic character pieces — as befits musical theater — vividly conveying the comic delight that must have accompanied this popular opera in its day.

A suggestion for a future program of this nature: it would have been helpful if the group had played some of the popular tunes before launching on their musical elaborations of them. Though the people of the time knew the songs, we don’t.

The one “high-art” piece of the program (that is, one that would have been played at court) was Joseph Bodin de Boismortier’s Sonata In Four Parts, Op. 34, No. 1. For this piece, Nagy took up the recorder, giving a mellower timbre to what is clearly a more serious composition than the others (and written in the “tragic” key of G minor). In a nod to the influential Italian composer Arcangelo Corelli, the slow movements are filled with expressive suspensions, and the fast movements are sophisticated fugues.

Along with the growing scope of their work, Les Délices continues to grow its audience. Sunday’s concert was well-attended and very enthusiastically received — a nice Mother’s Day gift that needed no explicit connection with the day.