Rottsolk, a native of Seattle now based in Philadelphia, said in a Zoom conversation that Nagy’s idea of moving from presenting live concerts to forming a production company to produce high-quality video and audio shows was a wise and creative solution to the vagaries of the pandemic.

“She saw right away that we need to be creative in order to still make music for ourselves and our audience and ensure that it has lasting value,” she said. “It’s not just yet another badly recorded, overdubbed situation. There’s room to be really creative and take things outside of the box. Debra has the ideas and all of the moxie and grit to make it happen.”

For Rottsolk, the process has been a learning experience. “I’ve recorded several CDs over the years, but I’ve never had to do an all-day video recording. And to perform for cameras and not an audience, and with all the existential noise of living in a world with COVID and all kinds of political and social distress, it’s actually been a pretty profound time to make music.”

The soprano said that she had driven to Cleveland two days before the recording session for rehearsals, and the musicians had spent a full day in front of Erica Brenner’s cameras filming “Women of Genius.” Having had to make videos at home, she was happy to yield control to professionals.

“I was 100% relieved to turn the video production over to the team and know I could just be a performer that day. Before that, we were all self-producing. That’s a lot to manage in your own little studio in your house, which is subject to the barking dog out back, everybody’s air conditioners, and the helicopters — this summer, lots of helicopters.”

The current Les Délices project was something of a challenge because Rottsolk has never performed this set of pieces before. “I’ve sung quite a lot of Élisabeth de la Guerre, but this will be my first outing with her cantata Judith. I knew about the Pinel and have done a lot of Couperin — but not this one — so the repertoire was all brand spanking new.”

And how does she feel about de la Guerre’s music? “I love her, but it took me a long time to come around. I encountered her fairly early in my career when I was still in school and learning the Ariane Bacchus cantata and I just didn’t understand the whole idiom. For me the turning point was really getting to be fluent in learning the manuscripts and the partnership between the text and the music.

“The facsimiles we have are so beautiful and so clean. I think she was an unparalleled dramatist, so good at taking this miniature cantata form and telling compelling stories. One often gets colorful storms or beautiful dreams in the French repertoire but not her kind of depth. She takes it to a realm where it’s both psychological and cinematic. And her pacing is unique. She’s not married to da capo forms or straight recitatives, but she allows things to be fluid and compelling.”

Rottsolk originally found the French Baroque repertoire challenging. “It was so hard. My first dive was into François Couperin’s Leçons de ténèbres, and there were so many trills! My father is an organist, so I grew up in a German Baroque household. It took me a long time to figure out how those little French microgestures fit into a bigger musical picture. I ended up having to think about the music more like an instrumentalist would.”

The soprano believes that “Women of Genius” will have a wide appeal. “Debra’s not only good at setting up a theme, but also at picking beautiful music to fit into it. The styles are diverse, with lots of colors.” She’s enjoying the opportunity to work again with Nagy, harpsichordist Mark Edwards, and violinist Julie Andrijeski, “who knows the Judith cantata very well,” as well as to collaborating for the first time with gambist Rebecca Landell Reed. 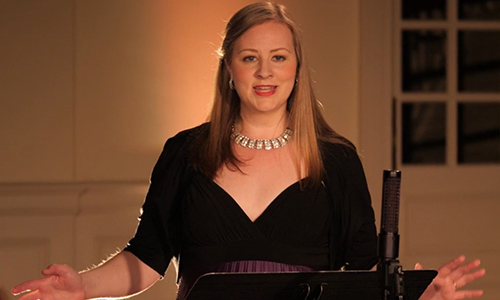 She also thinks that there’s a future for online programming once the novel coronavirus has loosened its grip. “It allows us to reach more people, like friends of mine who are night-shift nurses who wouldn’t consider attending concerts. They won’t replace the experience of attending a live event, but access and equity are important. We need to become creative about organizing watch parties and creating engagement. We need art!”

Rottsolk’s voice lessons for students at three of Philadelphia’s mainline colleges — Swarthmore, Haverford, and Bryn Mawr — have also moved online in the past year, providing new challenges. “I have more students than in the past, and we’re finding creative solutions to remote recitals.”

There are new situations to enjoy and find amusing as well. “My favorite online thing is meeting everyone’s pets,” she said. “And entering into people’s home life, not just their school life. I had one student with terrible internet service and no privacy. She had to have her lessons in the bathroom. She’d bring her phone into the shower and sing there — she sounded like a goddess!”

Click here to purchase tickets to “Women of Genius,” download the program and notes, and watch a trailer for the show.

The cimbalom was the feature of the show, an instrument capable of taking on many personas. Its performer, Chester Englander, has shaped his career around the instrument, and has inspired composers to write more repertoire for it, some of which was presented on the program. END_OF_DOCUMENT_TOKEN_TO_BE_REPLACED

You wouldn’t expect that acoustic from a glance at the nave, which is wide and long, but not especially lofty. But when I guest conducted a local amateur choir and professional orchestra in Beethoven’s Mass in C there a few years back, during the first rehearsal we released the final chord of the “Gloria” and listened in astonishment for the next several seconds. The sound continued to roll down the space like the big wave that surfers dream about. END_OF_DOCUMENT_TOKEN_TO_BE_REPLACED