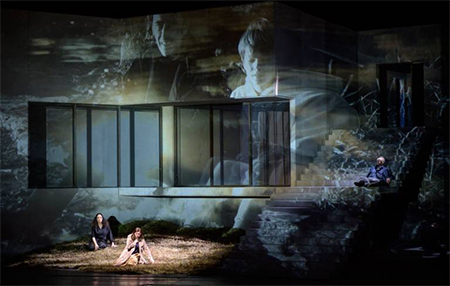 Opera has long dwelled on the point where love and suffering converge. When poets and composers made their first stabs at reconstructing Greek tragedy and created this genre instead, they retold myths of women who transformed to dodge lecherous gods, or of men duped into losing a lover twice. Artists have reiterated the idea of unhappy love for four centuries, each new opera of loss and longing a vertebra in the genre’s spine. Last week, I flew to Germany to hear a new opera as fixated on the consuming pressures of love as anything in the canon, yet also radical in its attention to the hearts, brains, and senses of ordinary, modern-day mortals.

For the premiere run of Chaya Czernowin’s Heart Chamber, the Deutsche Oper Berlin came alive with warm, variable lighting and enveloping layers of sound. Stationed just behind the composer’s mixing desk on Friday, December 6, I had a clear view of the 16-member choir in the loges, as well as the twin black boxes flanking the stage that housed the new music quartet Ensemble Nikel on one side, and vocal soloist Frauke Aulbert and double bassist Uli Fussenegger on the other.

Johannes Kalitzke led the Orchestra of the Deutsche Oper, and engineers from the SWR Experimentalstudio Freiburg assisted Czernowin in handling electronics. Claus Guth, whose staging of Handel’s Messiah offers both a fresh look at a classic and a mood characteristic of his other productions, presented abstract characters as distinct and vital.

Czernowin has described Heart Chamber variously as an “inquiry into love,” and a “grand opera of the smallest physical and psychic changes.” It aspires to a kind of realism that feels impossible to achieve: putting love on stage and in music not as a story with an end, but rather as a direct evocation of the feelings that flit across the mind and body of the love-struck. We might call them butterflies of giddiness, gnawing jealousy, the tingle of anticipation, or heartache. In Czernowin’s score, they become swarms of percussive clicks, terrific tides of low brass, cascading scales on the piano, and whispers at the top of the electric guitar’s fretboard.

The opera focuses on the inner lives of He (baritone Dietrich Henschel) and She (soprano Patrizia Ciofi), a couple who fall in love after She drops a jar of honey and He, an approaching stranger, saves it. The story begins with a meet-cute and ends with She saying “I love you.” They fight, make up, and dream of possible futures. From there, similarities to the average rom-com end. Henschel and Ciofi appeared on both the stage and in video interludes by the firm rocafilm. Contralto Noa Frenkel and countertenor Terry Wey shadowed the main couple as their “internal voices,” allowing the lovers to meet in the middle psychologically and vocally. 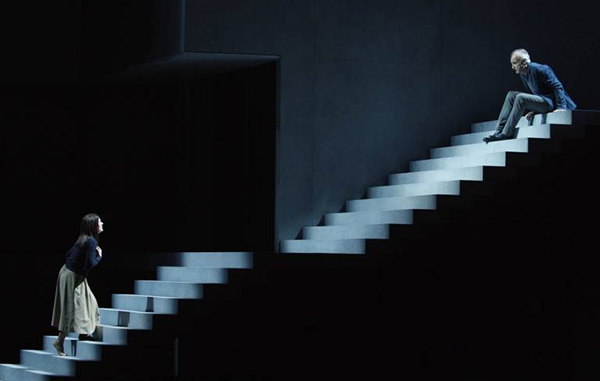 Standout performers included Fussenegger, who became the beating heart of the room in an opening solo of amplified plucks and bow effects, and Aulbert, who chimed in with the kinds of vocalizations one might make while going about a day alone: humming, clicking her tongue. Henschel and Ciofi made for first-rate actors on stage and screen, and handled the transcendental challenges of Czernowin’s vocal writing with confidence.

However, the primary singers’ most striking accomplishment may have been the simple humanity they projected. Ciofi’s She oozed relatable anxiety, while Henschel’s He carried himself with vulnerability masked by confidence. “Sometimes I suffocate,” He sang softly. “I don’t trust you,” She revealed later. The performers helped Czernowin, who wrote the libretto, to convey feelings in plain but profound vocabulary.

Near the end, all four singers — social and internal voices — gather after a fight, amid the stillness that follows. Frenkel and Wey, darkly intense throughout, become inner voices in the strictly musical sense as well. The scene in which He and She meet replays, this time with a different man picking up the honey jar. It runs one last time: She drops nothing, and they fail to notice one another. The set, a mockup of a concrete building, rotates to reveal a living room. Timpani glissandos sound, and She declares love. Czernowin leaves gods and fates in the past. The composer’s sound is that of butterflies in the stomach, her narrative logic that of the butterfly effect.