Why not create a virtual performance instead, using the school’s sophisticated recording technology? How complicated could that be? In a Zoom conversation from Chang’s home in Taiwan, where she has been hunkering down since the campus went on break at Thanksgiving, she confessed, “I didn’t know what I didn’t know, which is how you get into these huge projects.”

Creating a virtual performance meant getting friendly with some complex video editing software. “The only editing I had previously done was cleaning up my own footage, trimming clips and adding titles using iMovie. I had never used Adobe Premiere Pro — I tried it a few times, but it was too difficult.”

Meanwhile, other instrumentalists and singers were getting interested in the project. One big leap came when Rachel Waddell, director of the University of Rochester orchestra, wanted to join. So did the university’s chamber singers.

“I met Rachel last fall at the Dallas Opera’s Hart Institute for professional development,” Chang said, “We talked over the summer and realized that we lead similar orchestras in universities that are connected to conservatories. I decided to combine remote and in-person participants, and include the remote instrumentalists in large tutti sections. And I needed singers.” By December 15, the performing forces totalled 200 musicians. 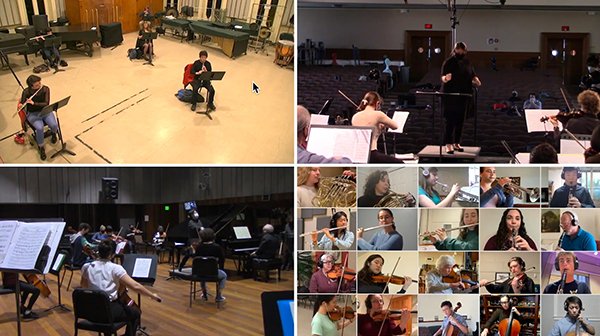 Beginning on October 20, Chang laid the foundation for the eventual recording in five Tuesday evening sessions with the Arts and Sciences Orchestra, after which she spent five to six hours each day really getting to know the Adobe software and playing around with the videos. “We had three to four cameras gathering different shots, all of which needed to be compiled on top of each other, and we did three or four takes for each section of the piece.” 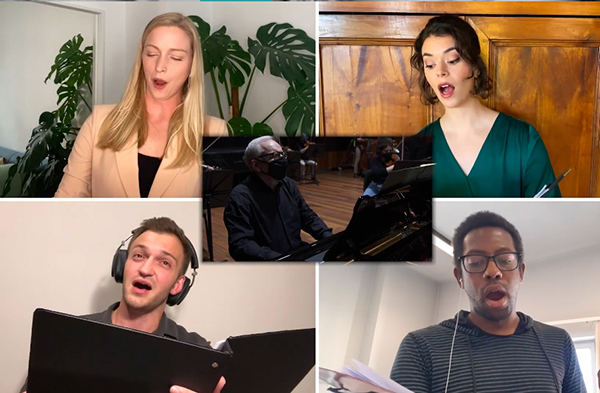 During a collaboration with a composer who was writing a piece meant to be performed on Zoom, Chang learned how the video conferencing software handles sound. “Zoom really likes the cello, but brass instruments not at all. It likes long tones rather than short ones, and gets confused by multiple clarinets. None of that could we have expected or planned for.”

In addition to the locally-recorded segments, submissions were also coming in from the remote participants, whose numbers continued to increase. All that content needed to be received by the end of November so Chang could deliver the edited video the week before the December 15 premiere.

“It was a long process,” Chang said, “that ramped up intensely at the end.” Back in Taiwan, which is in a time zone thirteen hours ahead of Oberlin, she essentially went into video quarantine. “You can work from anywhere if you show up at the right time. I edited until I had to go to sleep, then got up and started again, and taught classes in between.” By her reckoning, Tiffany Chang dedicated 420 hours to the Beethoven project.

Along the way, Chang thought it was important to share content with the orchestra. “I slapped some excerpts together to let them know what they sounded like, and how they fit into the whole piece.” 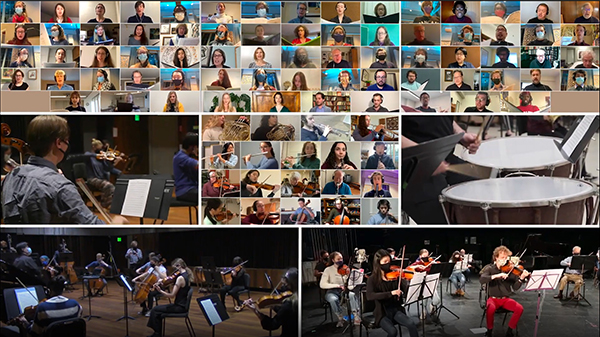 In 400 hours, plenty of technical glitches can arise, but Chang believes she eventually resolved 99% of them — the rest are probably unnoticeable except to the sharpest eyes and ears and usually have to do with timing between audio and video.

“It’s a miracle that we made it through the finish line,” she said. “I can only imagine what would have happened if we had to shut down in October.” But she believes that focusing on the process rather than on the final outcome is a healthy practice for a college orchestra. “We should be able to showcase our work-in-progress so it’s not the end of the world if we have to shut down.”

For more insights into the production of Tiffany Chang’s video, watch her behind-the-scenes video here. And watch the completed project here.