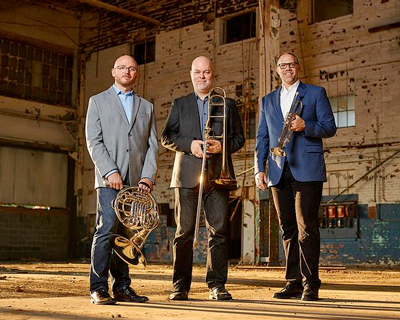 The names Johann Sebastian Bach, Ludwig van Beethoven, and Johannes Brahms are ubiquitous on concert programs. But Marius Flothuis, Arthur Meulemans, Norman Sherman, Robert Marek, and Arthur Frackenpohl? Not so much. So it was refreshing to encounter a whole set of new compositional personalities on the concert by Factory Seconds Brass Trio on Sunday afternoon, February 21, part of the 33rd season of Music from the Western Reserve at Christ Church, Hudson.

The ensemble takes its clever name from the positions that hornist Jesse McCormick, trombonist Rick Stout, and trumpeter Jack Sutte occupy in The Cleveland Orchestra. They’re all second-chair players, but they make first-class music together. They’ve also dedicated themselves to discovering repertoire for their seemingly odd combination of instruments, and the results so far are very promising.

The concert began with Sutte’s well-crafted arrangements of four chansons from a 1554 collection by the Italian madrigalist Jacques Arcadelt — perhaps the best-known of the composers on Sunday’s program. Shooting forward in history four hundred years, the trio turned to the 1945 Sonatina by Marius Flothuis, a member of the Dutch Resistance during World War II. Flothuis rose to become artistic director of Amsterdam’s Concertgebouw in 1955 and wrote a considerable body of songs and chamber music. The four-movement Sonatina charmed, teasing the listener with its inconclusive endings.

Arthur Meulemans was music director for Belgium’s Catholic Flemish Radio Service. His 1933 Trio is reminiscent of Hindemith but is spiked with Meulemans’ own quirky wit, featuring odd musical destinations and inventive use of mutes. It ends with a crazy fugue interrupted by a woozy interlude.

Its title alone made you curious to hear Norman Sherman’s National Anthem of the Moon (2001). Born in Boston but active in Canada and elsewhere as a professional bassoonist, Sherman began composing in earnest when he turned 75. Factory Seconds discovered his striking Moon piece through the Canadian Music Centre. Written in honor of a relative who died at the age of 10 and had always wanted to be an astronaut, its creative lunacy was one of the highlights of the program.

Trios by Robert Marek (1959) and Arthur Frackenpohl (1966) were the work of university music educators, Marek (a violist) having taught at the Vermillion campus of the University of South Dakota, and Frackenpohl at SUNY, Potsdam. Their pieces were well-made and accessible, Frackenpohl’s ending with a vivacious burlesque.

Sutte, McCormick, and Stout played this assortment of works with splendid technique and wonderful blend, adding some engaging verbal reflections to the notes in the printed program as the concert went along. Their fun and unusual 75-minute concert was a fine way to spend a Sunday afternoon.

END_OF_DOCUMENT_TOKEN_TO_BE_REPLACED

What was that strange din coming over the live feed from Ludwig Recital Hall on Friday evening, July 23, as the Miami String Quartet filed onstage to play the third faculty recital of the Kent Blossom Music Festival? Accustomed as we were during the pandemic ban on live audiences to hearing the sound of no hands clapping, it was both startling and thrilling to witness a large crowd putting their hands together to welcome one of the Festival’s perennial favorites back for an in-person performance. END_OF_DOCUMENT_TOKEN_TO_BE_REPLACED

Practical reasons aside, there aren’t many ensembles who can put together an all-Mozart evening as elegantly as The Cleveland Orchestra. END_OF_DOCUMENT_TOKEN_TO_BE_REPLACED